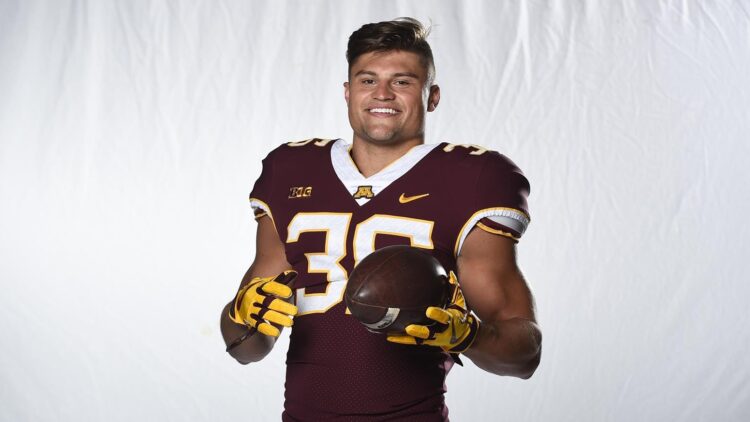 There’s a lot to like about Blake Cashman. The former walk-on at the University of Minnesota shined this weekend at the NFL scouting combine. Cashman finished top 5 among linebackers in the 40-yard dash, the 20-yard shuttle, broad jump, and vertical jump. These measurables will certainly help Cashman’s chances of being draft in April, but the work he’s done in the past 4 years at the University of Minnesota are what will really get scouts going.

Cashman came out of high school in Eden Prairie, Minnesota and walked-on to the Gophers as a special teams player. His effort in his freshman season earned him more playing time at linebacker, where he showed that he truly deserved to be in the lineup. Before Cashman’s junior season, and following his stellar performance in the Holiday Bowl against Washington State, he was awarded a scholarship for his hard work. In Cashman’s senior season, he was named captain and led the team in tackles with 104. Cashman did skip out on the Gophers bowl game, but it was to stay healthy and prepare for his shot in the NFL.

Cashman’s job as captain of the 2018 Gopher defense was no small task. The Gophers had freshmen composing 53.1% of their roster, and many played bigger roles on the team before the end of the season. So, part of Cashman’s job was to lead the defensive unit into growth and cohesion. Well, the Gophers weren’t the best team in college football, but they were able to take a couple of key wins against Wisconsin and Fresno State. Fresno State would finish the year 12-2 with their only losses being to Minnesota and Boise State. I don’t feel the need to explain how important beating Wisconsin is.

Cashman wasn’t actually on the field for much of the Gophers win against the Badgers. He was removed from the game due to an illegal hit on the Badgers punt returner. (For my money, that was about as clean a hit you can expect.) However, Cashman’s absence on the field shows his leadership as much as his presence would have. The Gophers had switched defensive coordinators mid-season and in a situation like that, the leadership is as much on the players as the coaches. Cashman’s leadership as a player is evident when his teammates were able to rally in his absence to take a decisive victory in hostile territory.

Cashman, as a former walk-on probably has a chip on his shoulder that puts him in line with many Vikings. Adam Thielen and CJ Ham are both local kids who have made their way onto the hometown team through opportunity, grit and determination. Although Cashman would have a slightly easier time if drafted, I think that chip and determination go a long way in success in the NFL.

I keep comparing Cashman to Harrison Smith. Cashman’s combine numbers measure well against Smith’s. Smith is quicker in the 3 cone drill, has bigger hands and a longer wingspan. Cashman has a faster 40-yard dash, a higher vertical jump, and a better broad jump, but overall they match well. I also can’t stop thinking about how Smith made the switch from a linebacker position to become one of the best safeties in the NFL. However, Smith made his switch to safety in college, where there is a bit of leeway for experiments like that. Cashman doesn’t have that luxury of time. Cashman has a much more likely comparison though, Chad Greenway.

Greenway was a stud when coming out of the University of Iowa, and the Vikings took him at 17th overall in 2006. Cashman isn’t a 1st round talent, but he measures up well with Greenway. Cashman is an inch shorter, and about 5 lbs lighter, but he’s also quicker. What Cashman currently lacks and will need to improve to succeed at the next level is the ability to take on blockers and get dirty in the run game. If given the opportunity, Cashman could be a quality starter for about a decade, much like Greenway.

However, Cashman will have to work his way up through special teams to make that happen. Cashman is worth a look in the mid rounds, especially if the Vikings haven’t done anything to shore up the linebacker depth by that point. It is rare that you get the opportunity for talent like Cashman in your own backyard, but it seems to be happening quite regularly for the Vikings.