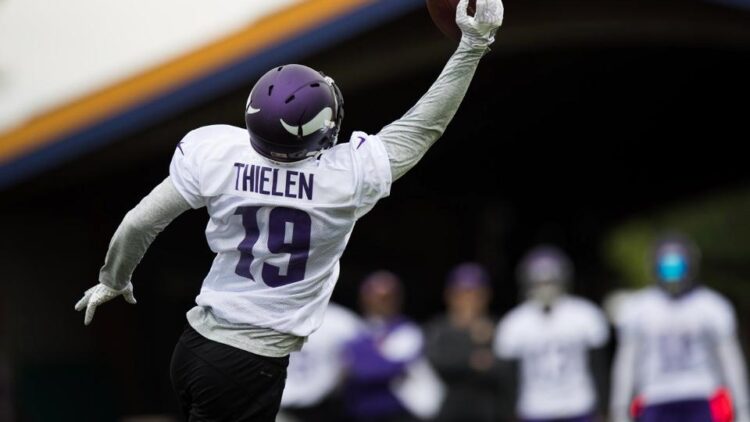 For a moment yesterday the entire state of Minnesota held it’s breath yesterday as star receiver and Minnesota product Adam Thielen laid on the field, injured, after simultaneously extending for a grab at the very edge of the end zone and stretching both legs to somehow keep both feet inbounds in a near inhuman display of what makes him the best receiver in the NFL. It turns out that Thielen is still human though, as he was able to walk off the field under his own power with the Vikings trainers (who were feverishly waved over by Vikings quarterback and all-around good guy, Kirk Cousins) but had a visible limp and never returned to action Sunday against the Lions.

Thielen chatted with the media after the game, saying the following:

“We’ll evaluate it, see where it’s at after getting an MRI, and then hopefully I’ll get ready to go, I’m optimistic that I’ll be playing, and that’s all we can do right now.”

Thielen obviously was being optimistic when he said he was optimistic about his chances and considering Zimmer’s typical tight lip-pery when it comes to the status of any of his injured players, it’s not a surprise that Thielen wouldn’t be super specific and honest about his status. Not that I’m complaining (or accusing him of actively misleading us), because it actually makes sense either way. Imagine him saying something that’d allude to: “Yeah, it actually really hurts, you know, that area behind your knee but above your ankle? *points to the exact area* It really feels extra bad when I’m cutting to the right so I definitely won’t be able to make many plays on the right side of the field Thursday and I really hope that no one hits me exactly where I’m drawing with this purple marker!”

Either way it looks like Thursday is just too soon for Thielen and/or the Vikings, as according to Tom Pelissero, Thielen avoided serious injury on Sunday but he is…
Well, I’ll just show you:

That makes sense. Hamstring injuries can linger and then flare up (as we’ve seen with Vikings corner Xavier Rhodes and his perpetual hamstring issue(s)) and they are especially bad for players like Thielen who run very precise and fast routes. So it makes sense that the Vikings would want to rest Thielen, especially when the Vikings are facing a bad team at home in the Redskins in about three days. The last thing this team needs now that it seems to be firing on all cylinders on offense is a season-long/ending injury from one of it’s most important players, especially as the other main components of the offense in Stefon Diggs and Dalvin Cook are injury-prone.

It doesn’t hurt, again, that the Vikings offense performed very well against a bad Lions defense (or at least a really, really REALLY bend but don’t break Lions defense) with Thielen on the sidelines. With Thielen on the sidelines look for more action from the Vikings tight ends Kyle Rudolph and Irv Smith Jr., as well as more action from rookie receiver Olabisi Johnson and … *shudders* Laquon Treadwell.
Should Thielen not play Thursday it’ll be his first missed game in 87 contests. His touchdown grab Sunday also tied him for a league-leading sixth grab.

Stay tuned to purplePTSD.com/VikingsTerritory.com for all your Vikings news/content!