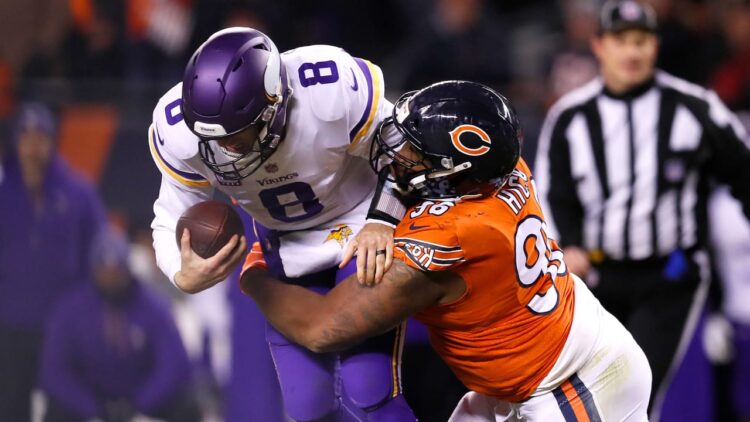 Although the Minnesota Vikings will be without starting right guard Josh Kline (concussion) today, it’s unlikely they’ll stop “pounding the beef” against Chicago — especially considering a key member of the Bears’ defensive line will reportedly be out.

According to Dan Graziano of ESPN, Bears’ defensive tackle Akiem Hicks is not expected to play today due to a knee injury he suffered on Monday night. As Graziano noted, Hicks did not practice all week. It was originally thought he would be a game-time decision, but it appears Chicago will play it safe with the stout defender.

Bears DT Akiem Hicks, a key part of Chicago’s run defense, is not expected to play today against Dalvin Cook and the Vikings, sources say. Hicks injured his knee in Monday Night’s game and didn’t practice all week.

The last time the Vikings played the Bears in Chicago (Week 11 of 2018), Hicks recorded five tackles for loss, one sack, and the Vikings’ offense only managed 1.3 yards per carry. Now, ‘Da’ Bears’ will look to Eddie Goldman, Nick Williams, Abdullah Anderson and Roy Robertson-Harris to step up with Hicks out. Chicago appeared to be preparing for Hicks’ absence yesterday as they elevated defensive lineman Jonathan Harris from the practice squad to the 53-man roster. Hicks has not missed a game since 2014.

Minnesota’s offense features Dalvin Cook, the NFL’s leading rusher through three weeks. Cook, along with fellow running back Alexander Mattison, have been a big reason why the Vikings currently have the league’s second-ranked rushing offense. The Vikings will likely lean on the duo a little more with Hicks sidelined.