No Small Year for the Big Goon 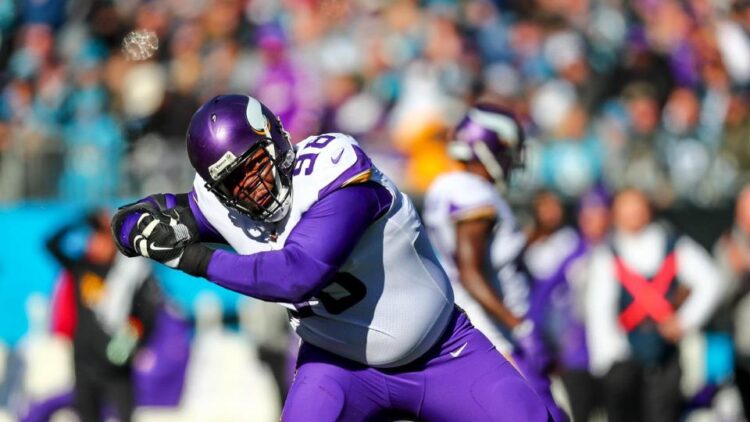 Fans have been focussing on Minnesota’s young draft picks during the first few weeks of OTAs, but there are also several veterans including Linval Joseph that will have to prove their worth this season. Joseph has been a staple of the defensive line since 2014, but a secret offseason surgery may put his career as a Viking at risk.

For the record, Linval Joseph is one of my favorite players of all time. After starting his career with the New York Giants, “Big Goon” was brought to Minnesota to help Mike Zimmer raise the defense from the ashes. At 6’4”, the veteran lives up to his nickname, and he tips the scales at almost 330 pounds. Joseph’s wingspan crosses two counties, and his superhuman strength makes him nearly impossible for opponents to contain.

Linval Joseph has the football and he will NOT be stopped!

BIG MAN TOUCHDOWN for the @vikings!

Joseph may seem like a monster on the gridiron, but he is indeed human and suffers from injuries like anyone else. Fans might not have realized that Linval fought through several injuries last year, as he started 15 of 16 games. He’s tough as nails, but rumor has it that Minnesota’s star nose tackle had surgery this offseason. Little is known about the secret surgery, but early reports from OTAs indicate that it was either elbow or shoulder surgery. This would make sense considering the large arm brace he wears for games.

Linval has been a force in Mike Zimmer’s defense, stuffing the run and averaging 61 tackles per season. In my mind, he’ll always be Zimmer’s exciting new recruit, but in reality, Linval is 30 years old and facing an uncertain future. He’s under contract through 2022, but the logistics of his contract keep his cap hit climbing each season. The Vikings are strapped for cash, and Linval’s career in purple could be in jeopardy if the surgery causes a decline in performance.

I’d love for Linval to stay with the Vikings, but his future is foggy. All teams are faced with tough decisions as their stars age, and Minnesota is in a particularly tough spot given their limited cap space. GM Rick Spielman shocked me when he opted to move on from veteran and fan favorite Brian Robison last year, but I don’t think Spielman would cut Linval this season. That being said, this will be no small year for the Big Goon.