Zimmer Looking for an OC but What He Really Needs Is… 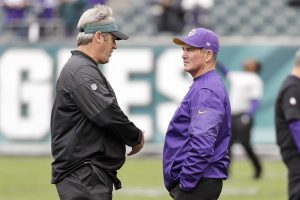 Mike Zimmer has hired more than a few recruits in his five seasons at the helm of the Vikings’ ship. Let’s see if you can guess which one of his relatively recent hires Zimmer is extolling after we purposely substituted asterisks in place of letters to hide the name: “We are very excited to add **** to our staff. We took our time with the search and made sure we left no stone unturned to get the right fit. He has a track record of success and has proven to be a great teacher. We feel **** will have good chemistry with our team and we are all eager to get to work.”

Less than a year later, that white-hot coaching prospect and object of Zimmer’s adoration, who was wooed away from the reigning Super Bowl champion Philadelphia Eagles to become the Vikings’ offensive coordinator, was unceremoniously dumped after a 20-7 loss to the Seahawks in Week 14. John DeFilippo, we hardly knew ye. If you were to have clicked on over to Sportsbook Review, a site featuring all of the most respected, reputable and trusted online sportsbooks in the industry, you would have seen that the Vikings were three-point road underdogs pretty much across the board in that game. You could have also read and still can a BetOnline review which illustrates precisely why BOL is considered one of the preeminent online sportsbooks in the market today. Unlike BetOnline, DeFilippo is no longer considered to be among the best in his industry.

Kevin Stefanski was chosen as the interim OC once Johnny D got his pink slip but now it’s time for Zimmer to decide if he will remove the interim tag off Stefanski or let him pursue other opportunities. Zimmer declared he would make a decision before Stefanski’s contract expires on January 8th and said the following about Stefanski, “I’m looking at all kinds of options there. We are sitting down, and again, we are evaluating everything. I think Kevin is a really good football coach. Very smart guy. I thought he did a good job for the three weeks that we were in a tough situation that we had to do. It’s fair to the organization, to myself, to the fans, that we look at everybody.”

Reports are that Zimmer won’t get to make the call because Stefanski is rumored to be pursuing other opportunities outside the Minnesota organization. But does it really matter? The truth be told, Zimmer axed Stefanski’s predecessor, John DeFilippo, because he couldn’t fire his quarterback and it was too late in the season to get a new offensive line. DeFilippo was a fall guy, plain and simple, and Zimmer’s posturing that Stefanski, or whomever gets tapped as the next OC, will be the cure that ails the Minnesota offense is a tired, old, bromide that coaches of underachieving clubs pull from their playbooks. What Zimmer should have done was stuck with DeFilippo, until recently regarded as one of the brightest young coaching minds in the game today, and zeroed in on the real culprit – the offensive line.

More than a few fans will kvetch that Kirk Cousins wasn’t the savior they anticipated when the Vikings’ brass bid adieu to Case Keenum and shelled beaucoup dough to lure the former Redskins signal caller to Minneapolis. However, Cousins gets a bad rap because the Vikings regressed from their NFC championship appearance last season to a playoff bubble team this year. But statistically, he had a better season than Keenum did in 2017 with eight more touchdown passes, 32 more passing yards per game, and connected on over 70 percent of his passes. In fact, Cousins’ completion rate trailed only Drew Brees’ 74.4 percent among starting NFL quarterbacks.

What Mike Zimmer should be focused on is retooling the offensive line and cutting down the 40 sacks that Cousins took in 2018. Minnesota has a boatload of talent at the skill positions who will thrive no matter who’s calling the plays. What Zimmer needs to do is something right out of the Donald Trump playbook – build a wall – in front of Kirk Cousins. Minnesota will pick 18th in the draft, barring a trade, and should use that pick to select a bodyguard for Cousins like Cody Ford of Oklahoma, West Virginia’s Yodny Cajuste, or Boston College’s Chris Lindstrom. If the unthinkable happens and Alabama’s stellar tackle Jonah Williams drops in their laps then they won’t need a tick off the draft clock to make that call. Whoever Zimmer hires as his new offensive coordinator is just window dressing because what he really needs to do is buy Cousins’ time in the pocket. We shall see soon enough if he makes that happen.