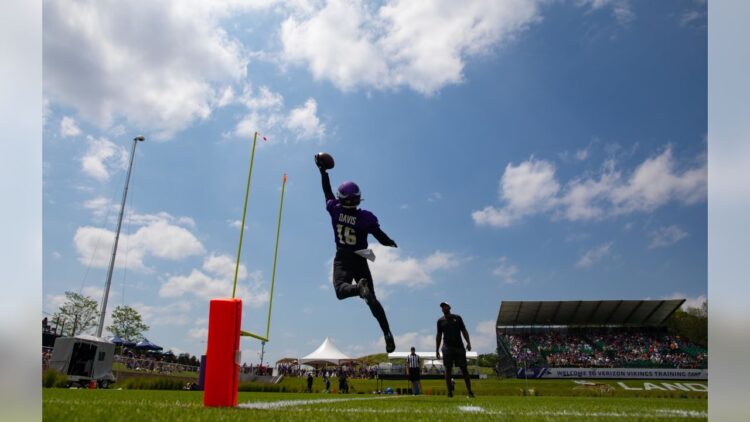 Friday was the first public practice for the 2019 season and it felt great to know that the dead time of the off-season was officially over. The Minnesota Vikings are THIS close to hitting the field at US Bank Stadium once again! Despite the fact that the first pre-season game isn’t for about two weeks, and they’re basically going through padless walkthroughs, it’s great to see the team back on the field in front of a crowd. Namely, because it gives us a chance to get an idea as to what the team is planning on doing at certain positions. Outside of his periodic shade towards some of his players, Zimmer is typically pretty tight-lipped regarding things he isn’t forced to divulge. So, after an off-season filled with expected coach-speak, we are able to derive where certain players fall on the depth chart and what it means for what is stacking up to be the most important/hyped season since 2009.

While the Vikings are set at their wide receiver one and two spot (or rather their 1A and 1B (or 1A and 1AA)), the third receiver spot is more wide open than it has been in a few seasons. Before getting into that, let’s take a look at the general state of the team as camp begins.

There were three players (which considering it’s out of 90, isn’t half bad) that started on the Physically Unable to Perform (PUP) list. Brandon Zylstra, David Morgan and Mike Hughes were all sidelined, which was a surprise considering that both Hughes and Morgan were expected to be ready by day one of training camp. . Camp isn’t over yet, but I personally believed they’d be ready by the time the public was able to take a gander at the purple and gold.

Shamar Stephen and Tashawn Bower were unavailable as well, listed on the Non-Football Injury (NFI) list. While Stephen is expected to be back soon, Bower reportedly tore his Achilles while working out this off-season and thus will be out the entire 2019 season. As a man with a ton of upside, it’s disappointing that he won’t be available in what is stacking up to be the most important season in recent memory for these Vikings.

One of my camp faves, Jeff Badet, was also not a participant although he was seen riding an exercise bike due to a groin injury he is still reportedly “Nursing”. Badet, who has an uphill battle to end up on the final 53-man roster, is easily the most exciting wide receiver prospect that’s got a shot to make the team. He will, though, need an excellent camp to end up beating out Jordan Taylor or Chad Beebe for the third receiver spot, so this isn’t a great start for him.

While the Vikings typically play things pretty close to the vest/chest, they did show their hand when lining up in their first-team 12 personnel (this position breakdown/depth chart courtesy of a great article by Eric J. Thompson over at DailyNorseman.com.

As you can see, they were using Beebe and Taylor interchangeably, which might surprise those who are still (somehow) on the Laquon Treadwell hope bandwagon. While cutting Treadwell before the end of his rookie deal would be a blow, financially and to the reputation of general manager Rick Spielman as a draft guru (nit-picky low-blow, perhaps, but he has struggled to find receivers (or offensive players in general)) in the early rounds of the draft, money is temporary and if you let a talented player go (or try to stash them on the practice squad), they’re not only gone forever but they also can contribute to another team that the Vikings end up facing (a la Mike Daniels going to the Lions after the Packers cut him).

Even in a season in which the team is strapped for cap space, you’d much rather keep a player like Beebe or Taylor (assuming they pan out) than hold onto Treadwell simply for the dead-cap hit, then subsequently cut him at the end of the season. The Vikings need a reliable and clutch receiver that can come off the bench and pick up a crucial third-down or catch a touchdown after perhaps not getting any looks for a game or two, like Jarius Wright in 20xx. Treadwell has shown time and time again that he simply isn’t that guy. I’m all for the team moving on from him at this point, especially considering what we’ve seen from guys like Beebe in pre-seasons past, or Taylor in OTA’s. Considering Treadwell hadn’t practiced with the 1’s until Monday, it looks like his time might actually be up.

This is perhaps the most make-or-break year that the Vikings have had in my life as they’ve clearly gone all-in this season, which is saying a lot considering in recent years they’ve traded a first-round pick for a quarterback in an attempt to salvage a season after Teddy Bridgewater went down with one of the most freak injuries in league history. Despite the financial wizardry that vice president of football operations, Rob Brzezinski, has been able to do in recent seasons, the team is up against the cap to the point of needing to restructure multiple players and also hope to god that none of their starting offensive linemen (or linebackers, or safeties, or quarterbacks, etc.) go down with an injury.

The Vikings won a bidding war for one of the best free-agent quarterbacks in recent history (even though they offered less than the Jets) and have drafted nearly every defensive prospect that head coach (and defensive mastermind) Mike Zimmer could’ve ever asked for, and thus are stacked at nearly every position (despite Holton Hill’s shenanigans). They have the best one-two punch at wide receiver, they retained their touchdown magnet tight end (who catches 80% of the balls thrown his way and also gets 0% yards after the catch) and drafted the yin to his yang in Irv Smith Jr. They have one of the most electrifying (when healthy) young running backs in the league in Dalvin Cook and drafted another exciting prospect in Alexander Mattison.

Most importantly, they also, finally, invested in the offensive line by bringing in sure thing Garrett Bradbury, which allowed former center Pat Elflein to move to his position of choice, left guard. They also, gasp, have depth at the right guard spot, with Josh Kline and rookie Dru Samia both appearing to be leaps and bounds above last year’s options (or lack thereof) in Mike Remmers and a cardboard cut-out of David Dixon. The biggest surprise of last season, Brian O’Neill, should be able to thus avoid the sophomore slump as he’ll actually have some help next to him this season. Whether or not they gel, quickly, is the key as they start the season with a few crucial games.

While The Vikings are expected to win their first regular-season game against the Atlanta Falcons (with (-200) odds via Sports Betting Dime), they have to travel to Lambeau the following week in a crucial division match-up. The Green Bay Packers appear to be in complete tear down (the precursor to rebuilding) mode, which was made even more apparent by the release of Mike Daniels this week. However, as the Vikings learned the hard way last season, beating the Packers at home could end up being the difference between winning the division and not, or making the playoffs or not. Had the Vikings beat the Packers last season instead of tying them (thanks to a complete melt-down by rookie kicker Daniel Carlson) they would’ve made the playoffs (and then lost to the Bears after starting with ten 3-and-outs).

Point being, the NFL is a game of inches. Having the right players for the right moments is incredibly important and they definitely are going to need to find the right receiver(s) for the third spot. It’s a big ask outside of just the expectations for the season, as they’ll need someone who can check multiple boxes. Because of how Diggs and Thielen line-up, they won’t need “just” a slot guy (as Thielen is especially dangerous in the slot), or just a speed guy, or just a guy with size. That means that they’ll probably end up keeping one of each in the size/speed/possession receiver(s). As of right now that sounds like it’ll be Taylor/Badet/Beebe, but then again this was just the first day of camp and I could be reading WAY too much into this.

Either way, we’ll learn more as camp goes on, especially once the pre-season games begin. Thankfully, we’re finally really close to that happening, so stay tuned to the purpleTERRITORY Media Network (purplePTSD.com/VikingsTERRITORY.com/purpleTERRITORYradio.com) this pre-season (and beyond) for all your Vikings coverage and if you’re looking to purchase some tickets to any sports events/concerts/theater shows take a second to read this article as we’re working exclusively with Ticket Club this season and are offering a FREE annual membership on their network (a $50 value, which means that you’ll have 12-months of access to tickets anywhere in the country without those irritating and expensive 20% fees that other ticket sellers have!).