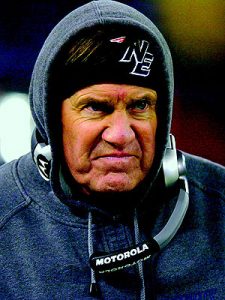 For better or worse, the Pats and Rams will be facing one another in tomorrow’s Super Bowl. With that in mind we at the VikingsTerritory.com/purplePTSD.com/purpleTERRITORY Radio family wanted to preview the 53rd Super Bowl by predicting who we thought would be the victor (and in some cases, what the score will be). So without further ado, here’s our prediction(s)!

Tom Brady will be playing in his ninth super bowl Sunday. He is the single most prolific quarterback in NFL history, as far as winning goes. The Patriots are going against the LA Rams, who haven’t been to the Super Bowl since 2001, when they were the St. Louis Rams and led by Hall of Famer Kurt Warner. The quarterback for the Patriots in that 2001 game was none other than 2nd year player, Tom Brady. Sunday might be the last time that we see Brady on the field, and maybe Bill Belichick too, but we can’t see into their minds to know what they want to do. Certainly, Brady looks like he may have lost a step or too in the last couple years, but the man is nothing if not a winner.

The Rams would have to do a whole lot to disrupt him and the Patriots offense if they want to have a chance at winning, because New England’s defense normally shows up for these big games ready to play. I expect this game to come down to a Tom Brady led drive with less than 2 minutes on the clock. Brady throws a touchdown to Gronkowski to win by 4 points. Then, Tom Brady can walk off the field a winner, and come back next season to do it all again.

In another dimension, the Saints and Chiefs are playing in Superbowl LIII tomorrow. Two offensive juggernauts with defenses that have shown flashes of brilliance throughout the season and the postseason. Unfortunately they’ve also proven incompetent at times… Which is why the Superbowl will feature the Rams and Patriots.

The Rams arrived on a silver platter, gifted by the referees in the NFC Championship game on a brutal, dangerous and outright unfair no-call. The Patriots, meanwhile were the beneficiary of a boneheaded offsides penalty which erased a Tom Brady interception that should have sealed the game in favor of the Chiefs. Instead the idiotic overtime rules spelled defeat from the coin flip.

So we’ve come to this. Two undeserving teams vying for immortality, fame, inflated future earnings and, most likely, an asterisk. With a win, Tom Brady will have the most Superbowl wins in NFL history. With a Loss, he will have the most Superbowl losses in NFL history. This year, I’m rooting for the Rams and I don’t think it’ll be close. I think they’re the better overall team on offense and defense.

They’re more exciting and I think they are the future. Sean McVay’s offensive mindset is setting the pace for new coaching hires in the NFL, meanwhile their young team and crafty acquisitions make this a scary team for years to come. I hope we’re going to see a changing of the guard with a 45-24 Rams victory.

For the record, I’m taking the Chiefs over the Saints in an alternate dimension and a much more exciting game. 54-48.

-Senior Writer purplePTSD.com
-Co-Host of ‘Vikings on the Clock’

A bit of a Chris Berman “Swami Score”. Call me crazy, but the Brady and Belichick experience is overblown, as all of their Super Bowls are close games. Also, the Patriots rarely strike first in Super Bowls, proving the game plan isn’t always flawless. As a result, McVay and the Rams click early, as the two week break allows the young coach to get extra creative with the playbook. Todd Gurley re-introduces himself to the world and melts the clock late to prevent a Tom Brady comeback.

While I personally think the New Orleans Saints and Kansas City Chiefs are much more deserving of playing for the Lombardi trophy, we as football fans aren’t allowed to have nice things, so here we are. Dread it. Run from it. The Patriots arrive all the same. Tomorrow’s game is a rematch 17 years in the making, and it may end up being just as memorable.

I think this game will come down to experience, which the Rams just don’t have. This will be Tom Brady’s ninth Super Bowl appearance and 40th playoff game. Head coach Bill Belichick is 30-11 in playoff games. While the Patriots are an aging crew that is slowly (but surely) coming to the end of its dynasty, they aren’t done yet. On the other side of the coin, the Rams are a franchise on the rise, but they are young. Sure, they have players with previous Super Bowl experience like CJ Anderson and Aqib Talib, but that won’t be enough.

Furthermore, the numbers just aren’t on the Rams’ side. When looking at the number of points scored, the two conference champions are just about the best, with Los Angeles at 2nd most and New England at 4th most. Most of those are because of the quarterbacks; Jared Goff and Tom Brady had the 6th and 10th most passing touchdowns, respectively. However, points allowed is a different story. New England’s defense kept the team close to the top at 7th in the league, but Los Angeles was not near as stout and finished at 20th overall.

I hate to say it, but the future is clear. Brady is going to be the first quarterback to collect six rings, 17 years after he got his first from the same team.