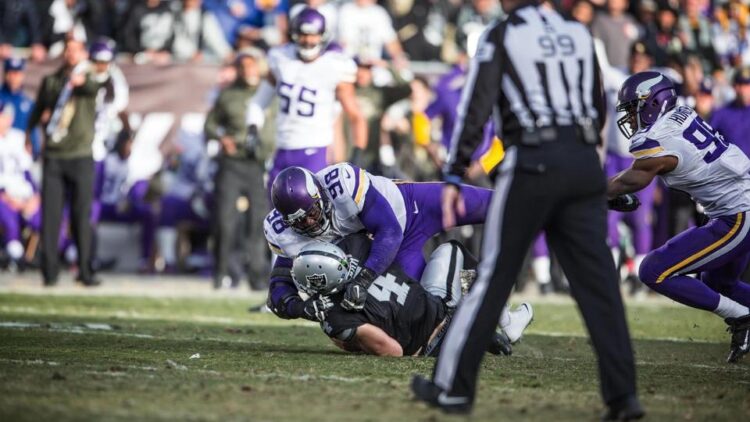 Sporting a 5th-best run defense and a league-worst pass defense, Oakland is obviously suspect to the aerial attack. Thus, Minnesota will have to undo all the work they’ve done this offseason and go back to their 2018 pass-heavy ways. Here are some players that will be crucial to accomplishing that:

Kirk Cousins, QB: Listing the quarterback as an important position is painfully obvious, but after a loss to Green Bay last week Cousins will be under a microscope all day. He has only completed 52% of passes this season, with a TD-INT ratio of 2-2. Cousins is again leading the league in fumbles, currently at 4. He only needed 8 completions to beat the Falcons, but that clearly wasn’t enough last week as his 32 attempts in Lambeau only produced 230 yards and one touchdown. While there may have been some poor calls by referees, a good quarterback has to get the job done regardless. Cousins needs another performance like Week 4 against the Rams last year. While the Vikings did ultimately lose that game, Kirk was on fire, throwing 36 completions for 422 yards, 3 TDs, and no picks. He has the arm. He just needs to be more selective on when and where to throw the ball.

Adam Thielen & Stefon Diggs, WRs: Arguably our two most lethal offensive weapons, the duo has not been very dynamic so far this season. Combining for 11 receptions, 204 receiving yards and 2 touchdowns across 4 player-games, Thielen and Diggs haven’t been performing to the elite standard we’ve come to expect from them every game. This is by no means solely their fault; OC Kevin Stefanski has directed the team away from a pass-dominated offense to one that takes greater advantage of our running backs. However, facing a defense that is absolutely terrible against receivers, now is the time to show up and show out, something our boys have no trouble doing. I can easily see each of them scoring at least one touchdown apiece this Sunday.

Derek Carr: Derek Carr will always hold a special place in Vikings fans hearts as the man who they could have had instead of Teddy Bridgewater. In fact, a few short years ago the Carr vs Teddy debate was all the rage. Now however, there’s questions whether either team made the right decision as both Carr and Bridgewater have yet to put together careers that live up to the hype. Carr has been an average NFL quarterback while Teddy has been sidelined with a gruesome knee injury. Carr is probably on his last legs in Oakland and will have to play to prove his value as the starter going forward. Look for him to try to light up the Vikings with smart decisions and the occasional shot deep. Of course, this is a very stout Minnesota defense that has nullified Carr in the past.

Hunter Renfrow: Renfrow is a player that I was very high on coming out of Clemson, and I think with good reason. He’s very polished for a rookie and has very good hands. He’s also quick and can run routes with the best young NFL players. His first two games as an NFL player haven’t been incredible, six catches for 43 yards, but if he gets the matchups he wants, unlikely with the Vikings secondary at nearly full strength, he could light it up. Either way he’s a good possession receiver and the Vikings defense has been known to give too much cushion at times to prevent the big play.

Benson Mayowa: This guy is a bit surprising. The seventh year defensive end has bounced around the league his entire career and has never been an impact guy, but he has been a solid professional. This season, he already has 3.5 sacks and two forced fumbles. The Vikings offensive tackles have done a much better job this season, but they must protect Kirk Cousins today. We all remember week three of last season when Cousins was hounded all day by the Bills and turned the ball over in multiple ways due to pressure. The Raiders will also have rookie Clelin Ferrell at the other defensive end spot. Although Ferrell was taken head-scrathingly high, he does still have a great skill set and could give the Vikings trouble. The line will need to give Cousins a clean pocket and Dalvin Cook room to run today.

Dalvin has made linebackers look silly the first two weeks of the season, and expect that continue. The Raiders are the worst defense the Vikings will face In their first three games, so another big day for Dalvin Cook is suspected.

The packers didn’t really make many plays last week, Kirk just made too many mistakes. Zimmer could elect to take the ball out of his hand, or he can let his QB go out and make some plays. The Raiders secondary is poor and will have trouble handling Diggs and Thielen

Teams have moved their best interior player over top of The Vikings Left Guard because it’s a better matchup. Brabudry and Elflein will need to communicate to stop ultra strong Defensive tackle Jonathan Hankins. He’s the least skilled Defensive tackle they’ve faced this season, but his strength can cause issues up front.

Outside of all of the bird species names in the NFL, perhaps no two teams have a more similar
name/aesthetic than the Vikings and Raiders. After all, Vikings are technically Raiders (which
begs the question, what are Raiders and why is a team in Oakland named that?). But that’s not
my assignment for today’s piece, rather I am here to discuss the history betwixt today’s two
teams and in doing so I thought I’d start with a rather lazy comparison between the two teams,
so I could juxtapose that with the rather limited history that the two teams have actually had
playing against one another.
They’ve met in the regular season 14 times and once in the post-season. That game was Super
Bowl XI, a game in which (per usual) the Vikings were favored but went on to essentially just get
destroyed by John Madden’s squad. It was so bad that the Raiders actually set a (then) Super
Bowl record 429 yards, and despite a scoreless first quarter the Raiders also set another record
for the most yards in the first half (with 288), which helped them put up 16 points in the second
quarter (to the Vikings 0). While the Vikings outscored the Raiders in the third quarter 7-3, they
went into the fourth quarter with a score of 19-7 and ended the game with a gut wrenching
32-14 dismantling.
When it comes to the regular season, though, instead of just paraphrasing
Pro-Football-Reference.com, or the paraphrasing of Pro-Football-Reference.com by
DailyNorseman.com‘s Christopher Gates (who is an amazing writer), I’ll just cross post the stats
that Gates grabbed from PFR.com for your reading pleasure:
https://www.dailynorseman.com/2019/9/21/20876825/brief-look-oakland-raiders-minnesota-vi
kings-historyTotal regular season games between the Raiders and the Vikings: 14All-time record: Raiders, 9-5Total Raiders points scored, head-to-head: 335 (23.9 points/game)Total Vikings points scored, head-to-head: 280 (20 points/game)Longest Raiders winning streak vs Vikings: 4 games (11 December 1977 to 14 October 1984)Longest Vikings winning streak vs Raiders: 1 game, five different times (most recently on 15
November 2015)Most recent Raiders road win in series: 20 November 2011 (final score 27-21)Most recent Vikings home win in series: 18 November 2007 (final score 29-22)Biggest Raiders road win in series: 26 points, 14 September 1981 (final score 36-10)Biggest Vikings home win in series: 11 points, 8 November 1987 (final score 31-20)Now back to me.Outside of that Super Bowl, today’s game may be the most important match-up
between the Vikings and Raiders. The Vikings are in desperate need of a  strong
performance, namely/especially from Kirk Cousins behind center. The Raiders are in
rebuild mode and should be an “easy” win (if that’s a thing in the NFL) and while this
game screams “IT’S A TRAP!” like Admiral Ackbar after a few Four Lokos, it also is much
deeper and more terrifying than that.
So, while this may have seemed like one of the more boring games on the schedule back when it
was released in the off-season, the intrigue (and potential for complete disaster) make this game
one of the more important week 3 contests in team history as well as one of the more important
meetings in the regular season between these two historic franchises.