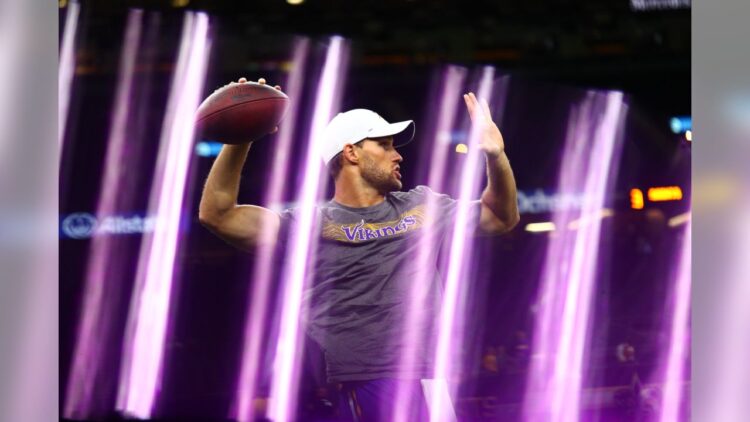 As former Vikings linebacker Chad Greenway once said, “strange things happen when the Vikings play in Soldier Field.” But when the result is another Vikings loss, like it often is down there, strange becomes normal. The Vikings lost another big divisional road game on Sunday, this time to the Chicago Bears by a score of 16-6.

The Bears defense was as tough as advertised, and they put a hurting on the Vikings offense. They sacked the quarterback, bottled up the running, won the turnover battle and locked down the receivers, writing the perfect prescription for beating the Purple.

“They got after us defensively, today, pretty well–we had like 90 yards going into the fourth quarter,” head coach Mike Zimmer told KFAN radio.

The loss drops the Vikings to 2-2 on the season and into last place in the NFC North Division. And the view from there has to be pretty poor, but they will have to start climbing out of the basement when they head to the Big Apple next week to take on the New York Giants—winners of their past two games.

In a game where the Minnesota needed their QB to win it, Vikings signal caller Kirk Cousins didn’t get the job done. It is not all his fault, but plenty of the blame lands at his feet. He held the ball too long at times, overthrew an open Adam Thielen that might have been a touchdown, didn’t see some open receivers, fumbled twice (although Riley Reiff got beat badly by Khalil Mack for the strip sack on the fumble he lost), and he just never produced enough offense to win a game when the opponent sold out to stop the run. His numbers included 27 of 36 passing for 233 yards, one touchdown, no picks and a 91.5 quarterback rating. Cousins doesn’t look comfortable in the pocket with Mack and Company coming after him, but he has to play better—and that has to be more action than words.

The offensive line took a step backwards against the Bears and it wasn’t in an attempt to protect the quarterback. They are improved unit this season and have had some good games, but today’s wasn’t one of them. The Bears, minus Akiem Hicks, sold out to stop the league leading rusher in Dalvin Cook, but the line never provided any room for him to sneak through for any yardage. There were numerous penalties on the line as they struggled mightily protect Cousins—and they failed at that as he suffered six sacks on six hits (resulting in two fumbles) in the game. The line is better, but even with right guard Josh Kline back from injury, it’s not good enough to protect against the Bears defensive front.

The Vikings defense gave up an early touchdown to the Bears, and with the offense struggling (against a very stout Bears defense) it was enough to lose another divisional road game. The line never got a sustained rush that could in any way effect what the Bears were doing on offense. They knocked out Mitch Trubisky during the first series but the backup, Chase Daniels, played better than the starter had done this season. It all starts with the rush, and the Vikings never surmounted one, allowing Daniels and the Bears offense to stay on the field and score enough points for the win. To be a team with a good defense you better bring one yourself.

Welcome to the NFL stats sheets, Olabisi Johnson. The star of the preseason made his first catches in the league with four for 35 yards, which was the second-most on the team (tied with Dalvin Cook, who had six catches for 35 yards). What it may demonstrate is that the Vikings are in a big need for a third receiver. Stefon Diggs and Adam Thielen were bottled up for most of the day (although Diggs finished with seven catches for 108 yards thanks to garbage time). The passing game was anemic once again in Chicago.

Dalvin Cook had little run to room (fourteen rushes for 35 yards) and he couldn’t produce anything on his own. He caught four passes for 35 yards, as well, but plenty of it after the game was decided. He did get in the end zone during garbage time, which is why we are talking about him here. But if you are running team and can’t run, you are going to get beat nine times out of ten. And that’s how they lost in Chicago.

Cousins put together a nice drive of 13 plays for 92 yards for the Vikings only score of the game. He completed 12 consecutive passes and had the offense moving like we had hoped to see all game long. Unfortunately, it came during garbage time in the game when the Bears were in prevent defense and working the clock. We will take the fact that the team was not shut out, but we offer no defense of this performance, because the game ended on the next offensive series when Cousins threw behind Thielen on fourth down. There is trouble in River city—and it starts with a C.

Penalties. Vikes had seven for 68 yards and the Bears had seven for 50. There was laundry all over the field this afternoon. The more the refs throw the flags, the more mistakes they make. They made some mistakes today. They make mistakes every week. That is not why the Vikings lost.

With the Bears lining for either a field goal or a punt on forth down in Vikings territory, head coach Mike Zimmer called a timeout to keep the Bears from taking a penalty for a more room to punt—or so it seemed. Then we heard that Minnesota had 12 men on the field, and if Chicago snaps the ball the Vikings take a penalty and get a first down. Zim made the right call on the timeout, but 12 men on the field has a history of being back for the Purple.

“Stranger things” happening in Soldier Field. Nothing sticks out egregiously, but this was another bizarre contest. Trubisky goes down on the first drive and his backup comes in and looks like the reincarnation of Y.A. Tittle. That was on the defensive line, which has been unable to get to him. Hopefully the series of strange things has ended for the Vikings.