The Most Memorable Vikings Players in my Life-Time Series: Pt. 1 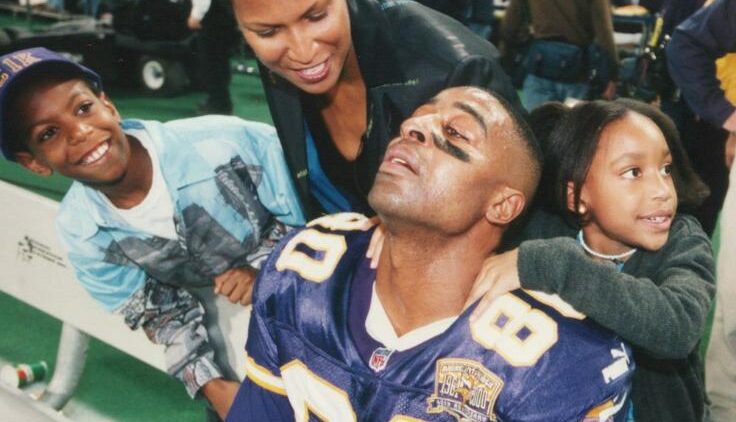 While the Vikings are looking forward to Green Bay this weekend and the malaise (as a writer and a fan) of the off-season is officially over, it never hurts to look back on SOME memories as a Vikings fan. Sometimes the present/possible future can be too nerve-wracking to think about (at least all the time). It’s with that in mind that I’m starting a new series that’ll break down the life/career of different Vikings I’ve personally been able to watch (live). While I have my favorite player(s), I felt like I had to start with Cris Carter, who was the man when I was younger and who was the mentor to my favorite Vikings/NFL Player ever, Randy Moss.

So, let’s do this thang…

It’s not surprising that Carter grew up in Ohio, considering his connection to THE Ohio State University, but what is surprising (to some) is that Carter was heavily recruited not only for his prowess on the football field but also for his hooping skills. After accepting an offer to play for Ohio State on the grid-iron and the hardwood, Carter became a consensus All-America selection after his junior idea (which made him Ohio State’s first All-American wide receiver) in football.

As just alluded to; Carter did intend to play both football AND basketball as a Buckeye, but after the results of his freshman season Carter decided to focus only on football as it was clear he had an amazing gift. His freshman season concluded a trip to the Rose Bowl, where he set a then record with nine receptions for 172 yards.

As anyone who watched Carter knows, he had great hands and ran great routes (and had some great ups, as well). He was also known for his acrobatic side-line catches, which means that (while he did obviously work on this craft) his NFL calling card was something ingrained in him from an early date. His quarterback during the 1985 season was named Jim Karsatos, who had the following to say about a catch Carter had on a ball that Karsatos meant to throw away/out-of-bounds:

That quote sums up Carter in the best way possible, and that talent was too palpable for the NFL not to notice.

With that, Carter was drafted in the 4th round of the 1987 supplemental draft by the Philadelphia Eagles. He played sparingly his first year (five catches for 84 yards), but as we know “All” Carter does is catch touchdowns and while he didn’t have a TD on all five grabs, he came close with two touchdowns his rookie season (that’s a 40% catch to TD breakdown… Not too shabby).

His second-season built on his first, with Carter getting more involved in the Eagles passing game in 1988. He caught 39 balls or 761 yards and tied for the team lead in touchdowns, unsurprisingly, with six. He built on that success even more during the 1989 season, at least in terms of red-zone offense, increasing his TD total to 11 that season but digressing in terms of catches (45) and yards (605).

The head coach of the Eagles at that time was the legendary Buddy Ryan and he and Carter did not get along. Because of that (and some of Carter’s life choices), Ryan made Carter a surprise cut after training camp before the 1990 season. While Carter was displeased at the time, he has since credited Buddy’s “Tough Love” with saving not only his career but his life. He posted the following on Twitter after Ryan passed away a few years back:

Condolences to Rex, Rob, and the rest of the Ryan family. You saved my life with tough love. https://t.co/OYSsfrFMhi pic.twitter.com/DyZ6dP58zw

In speaking on his time under Ryan and with the Eagles Carter has essentially said that Ryan cut him because of his addiction to drugs and alcohol (at least there weren’t any Pennsylvania online casinos back then?). Which, as gross as this take is, at least for once the Vikings were on the receiving end on the positive outcome of a scary and dangerous situation. Signing Carter off waivers on the 4th of September, 1990.

Also surprisingly, Carter didn’t make an immediate splash with the Vikings as he was stuck behind receivers Anthony “Don’t Call me Cris” Carter and Hassan “Don’t Call me Anthony” Jones. He did, though, exact almost immediate revenge on his previous team by nabbing 6 balls for 151 yards (including one 78-yard touchdown), on a mid-October edition of ‘Monday Night Football’, sound familiar? He finished his first year with the Vikings with 27 receptions, 413 yards and three touchdowns (his worst mark since his rookie campaign).

1991 was the first year we saw the Carter we’d end up loving and almost taking for granted. He led all Vikings with 72 catches for 962 yards (and 5 touchdowns). While he was succeeding personally, the Vikings as a team stagnating, and then coach Jerry Burns ended up retiring after Carter’s second season with the team (1991), thanks to the Vikes’ ho-hum 8-8 record.

Of course the Herschel Walker trade didn’t help, as the team traded away a ton of draft rights which severely dampened the Vikings chance to do anything in the early-to-mid-90’s (which makes you wonder just how many Super Bowls they’d have won had they not traded an entire dynasty worth of players/picks to the Dallas Cowboys). As they really wanted to start clean they brought in Stanford coach and acolyte of Bill Walsh’s school, Dennis “Denny” Green to bring the offense into the 90’s and wash their hands of the last couple seasons.

Green was obviously known then for his offense, but he was also referred to as the “New Sherrif in Town”, a title he lived up to by cutting players like quarterback Wade Wilson and the aforementioned Herschel Walker (they also traded defensive tackle Keith Mallard to the Seahawks) and bringing in new blood at multiple positions.

Green’s changes brought nearly instant success, with the Vikings becoming one of the NFL’s best team in his first season. They posted an astounding 11-5 record (losing two of those games by a combined score of 6), which was good enough for them to take the division (which was then called the NFC Central) for the first time since 1989. Green did that by replacing Wilson and Walker with quarterbacks Rich Gannon (who was 8-4 in 12 games that season) and Sean Salisbury (who was 3-1 in four games) as well as running back Terry Allen, who had over 1,200 yards rushing that season (an increase for Herschel “Dynasty (for the team that’s trading me) Builder” Walker’s 825 rushing yards).

It wasn’t until the ’93 season, with new quarterback Jim “Super Bowl Shuffle” McMahon, that Carter reached elite levels in every way possible. He surpassed all of his then-career bests, with 86 catches (up from 72), his first 1,000 yards season (1,071) and touchdowns (9). Carter only improved when the Vikings pulled a move we should all be used to by now, the signing of a Hall of Fame quarterback past his prime (known hereby as doing a “Vikings”).

The 90’s version of “Old Favre” was former Houston Oiler Warren Moon, who showed he still had gas in the tank. Carter (and the Vikings) was (were) the beneficiaries of Moon’s longevity, as he had career years not only in terms of the Vikings but also the NFL as a whole. In Moon’s first year in purple, Carter set the then NFL-record for most receptions in a season with 122, before airing the ball out constantly became the status quo. Think about that.

Over the next few seasons, Carter continued to carve out his niche as the best receiver in team history (up until that point), but it was 1998 when things really started taking off for the Vikings. From 1992 to 1994 the Vikings lost in the first round each season and even missed the playoffs altogether in 1995 (for the first and only time in Denny’s career). Moon was replaced by Brad Johnson, who had an immediate rapport with Carter as Carter continued putting up gaudy numbers that helped the Vikings make the playoffs yet again in 1996 and 1997 with a tough playoff win coming in 1997, for a score of 23-22 over the New York Football Giants.

It was the addition of Randy Moss before the 1998 season that brought the Vikings to the next level, going 15-1 his rookie season and falling in heartbreaking fashion to the Atlanta Falcons and their insufferable “Dirty Bird” dance. Moss was immediately supported by Carter who took him under his wing and taught him the tricks of the trade as well as the work ethic needed to utilize them. Not a lot of people give Carter the credit he deserves for teaching Moss everything that he (ie Carter) knew, with Moss’ game mirroring Carters in a lot of ways (hands, body control, sideline catching ability, vertical, scoring lots of touchdowns, etc.). ’98 proved to be the best chance Carter had to win the Super Bowl, as well, even though the Vikings had another shot in the 2000 season/NFC Championship game. That game was payback for the Giants as they destroyed the Vikings 41-0 at home, a loss so devastating that people at the time (myself included) were convinced that the Giants had access to the Vikings radio signals during the game (which would have allowed them to listen in on all play calls).

Carter played one more season in Minnesota, a season ravaged by the death of offensive lineman Korey Stringer during training camp and the loss of head coach Dennis Green (who was fired before the season was over and after half the fan-base turned on Green for his playoff woes), as well as a 5-11 record (which meant that the Vikings missed the playoffs). Carter spent that off-season considering what team to bring his talents to, leaving the Vikings record books re-written across the board. He was their all-time leader in receptions (1,004), yards receiving (12,383) and touchdowns (110), and broke records in other categories as well.

Carter specifically exercised a clause in his contract to get out of his deal with Minnesota after the 2001 season, showing that he did indeed want to play and not retire. Carter spoke with multiple teams (St. Louis Rams, Cleveland Browns, etc.) that Spring, before settling with the Miami Dolphins (who were in need of help at the position). 2002 was Carter’s last year in the league, leaving it as changed in general and in terms of records as he did when he left the Vikings. He caught the most touchdowns (at the time) of any wide receiver in NFL history not named Jerry Rice, for example. While he’s since been bested by receivers like Randy Moss, Terrell Owens and Marvin Harrison, Carter’s legacy is secure as a top-three wide receiver in the history of the game and for having perhaps the best hands in the history of the league.

His story is an inspiration to people like me, who are also overcoming addiction in their lives and, again, his impact on Randy Moss cannot be overstated. Carter is rightfully a member of the Hall of Fame and Ring of Honor and has done his part keeping the dream alive for Vikings fans on the numbers shows he’s been a part of, by almost always siding with the Vikings when asked for a game prediction before kickoff.

Just keep him away from any rookie Symposiums!