The End of the Teddy/Keenum/Bradford Debate is Coming 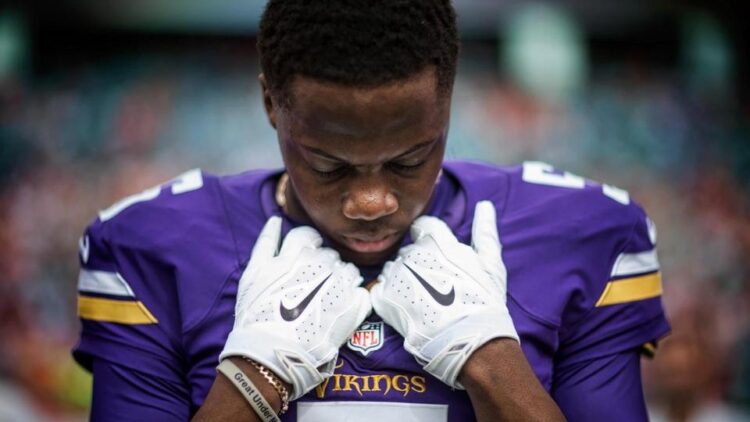 Soon, we may see the end of one of the biggest debates in recent Vikings history. With the injury to Drew Brees, former Vikings Teddy Bridgewater will finally get his shot to see significant starting time since his gruesome knee injury. That means we will finally see who was the better option of Teddy Bridgewater, Case Keenum, and Sam Bradford.

The Vikings decided to move on from all three quarterbacks who brought them many exciting wins, and of course heartbreak, when they signed current quarterback Kirk Cousins to a fully guaranteed $84-million contract. Let’s take a look at how the three options have done so far, and what Teddy needs to do to prove he was the best option.

Bradford’s time in Minnesota was short but memorable. After Bridgewater’s injury prior to the Vikings 2016 season, the team decided to move a first round pick to the Philadelphia Eagles for Bradford. A former first overall pick, Bradford had all the arm talent in the world, but rarely put together a fully healthy season. Bradford took the reigns from veteran Shaun Hill in week two, in the first regular season game at US Bank stadium, and outplayed Aaron Rodgers and looked every bit the Heisman Trophy winner he was at Oklahoma.

That 2016 team would rattle off three more wins before their bye week, but admittedly most of that was due to stellar defensive play. Coming out of the bye, the Vikes would lose four in a row, including a 20-26 loss to the Kirk Cousins led Redskins. By seasons end, Bradford would have a new mark for completion percentage in an NFL season, but the Vikes would end up just 8-8 and miss the playoffs. Bradford’s high completion percentage was likely due to his high amount of checkdowns because of Minnesota’s abysmal offensive line. Either way, 2016 was not a successful season for the Vikings or Bradford.

Bradford only played two games in 2017 for the Vikings. An excellent week one victory against the New Orleans Saints where he threw for 346 yards and three touchdowns was followed by three games of being inactive. The Vikings tried to fire up Bradford for their week five game in Chicago, but pulled him by the end of the first half. Bradford found himself on the injured reserve until the Vikings playoff game against the Saints, but Case Keenum showed that he was the much better option at that time.

The Vikings allowed Bradford to walk before the 2018 season and he signed with the Arizona Cardinals. Bradford started the Cards’ first three games, but was pulled in the final moments of week three for rookie Josh Rosen. Bradford has yet to play another snap in the NFL and is likely done.

Keenum came to Minnesota prior to the 2017 season to be the backup to Sam Bradford, but was thrust into the starting role following Bradford’s injury in week two. What he did after that was nothing short of amazing. He put up 3,547 passing yards, 22 touchdowns to only seven interceptions, and led the Vikings to a 13-3 mark and the number two seed in the NFL playoffs.

Even with a great regular season, Keenum cemented himself in both Vikings and NFL history with his playoff performances that season. First, against the New Orleans Saints, Keenum made the throw that would become known as the “Minneapolis Miracle” to Stefon Diggs, and the Vikings miraculously walked-off into Philadelphia. The next week, Keenum didn’t look so hot. Following an opening drive where the Vikings offense rolled down the field and scored a touchdown, Keenum threw a pick-six that seemed to turn all momentum to the Eagles favor. The Vikings would finish the game losing 38-7 and Keenum’s time with the Vikings would end on the biggest low since Blair Walsh’s missed field goal in the 2015 playoffs, or perhaps even the ‘98 NFC Championship game.

After he became a free agent, Keenum signed a two-year $36 million deal with the Denver Broncos. He played all 16 games for Denver in 2018, but has since been traded to the Washington Redskins to hold the starting job until Dwayne Haskins is ready to go. Keenum’s career since the debate has been better than Bradford’s, but there is a reason he was moved from Denver for a low draft choice. He has talent, but has not shown enough to outright win the debate so far. However, he is winning at the moment because of his ability to stay on the field and play a full season for a bad Denver Broncos team.

The Minnesota Vikings were riding high into the 2016 season. Sure, they had just come off a crushing divisional round loss to the Seattle Seahawks, but they had their quarterback of the future, an aging but still effective Adrian Peterson, and a shiny new stadium to play in. That all changed on August 30, when Teddy Bridgewater suffered what appeared to be a non-contact injury that almost made him lose his leg. Bridgewater would miss the entire 2016 season and the Vikings would finish a mediocre 8-8 with their future hall-of-fame running back gaining less than 100 yards and their quarterback of the future now uncertain if he would ever play football again.

Bridgewater made what can only be described as a miraculous recovery and found his way back onto the football field one last time for the Vikings in week 15 against the Cincinnati Bengals. In that game, Teddy threw two passes, one incompletion and one interception. At the moment though, it wasn’t about the result, it was about a man making his way back on the field after a gruesome injury.

Following the 2017 season, the Vikings declined to resign Bridgewater in favor of bringing in Kirk Cousins. Teddy would sign a one year deal with the New York Jets, but was traded to the New Orleans Saints to backup Drew Brees. Bridgewater started one game for New Orleans in 2018, their unimportant week 17 matchup with the Carolina Panthers, and threw his first touchdown pass since his injury.

So far, Bridgewater has not been the winner here, but he has a chance to prove himself with the thumb injury to Drew Brees. This is the opportunity all Teddy backers have been waiting for. The chance to show that he’s still got it and can earn the right to say “I told you so.” Of course we don’t know how he’ll do in extended time on his knee, or if he can throw the ball deep better than he could for the Vikings, but until Brees returns, we might finally get to see if Bridgewater was the best of the three, or indeed if the Vikings made a mistake in paying Kirk Cousins $84 million to be their man.