Reactions to the Stefanski Hire 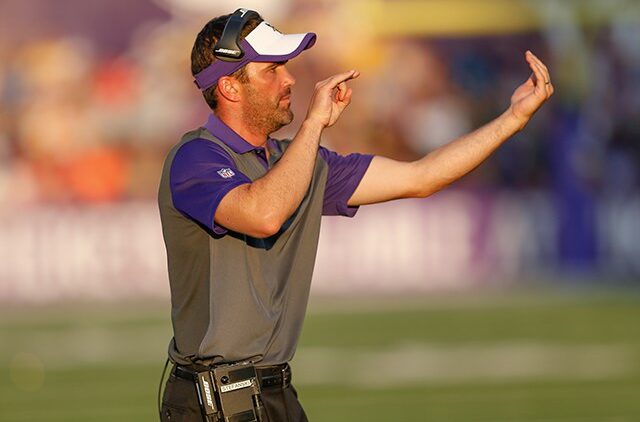 Unsurprisingly and at the same time thankfully, the Vikings announced that their interim offensive coordinator Kevin Stefanski would be retained as the offensive coordinator for 2019 this week. The writers of purplePTSD.com and VikingsTerritory.com reacted on our internal chat platform and thought that we should bring those reactions to the public. So, without further adieu, here’s some of the thoughts we had about the Vikings, Stefanski and 2019.

This article previously appeared on our sister site, purplePTSD.com! Make sure you check out both sites every day for all of your Vikings coverage (and join our message board to chat with our writers and other Vikings fans)!

The Vikings decision to hire Kevin Stefanski as the full-time offensive coordinator is the right one for both the organization and Stefanski himself. Hiring Stefanski keeps continuity in the Vikings offense, despite him only be interim coordinator for three games this season. Stefanski’s relationship and knowledge of the players on the roster gives him the best shot to come in and correctly utilize the skill set that each player has. Also, if Stefanski ever hopes to move up to be a head coach someday, this might be his chance to show what he’s got.

His time under former offensive coordinator and current head coach of the New York Giants Pat Shurmer, hopefully, gave Stefanski an idea of how to adapt an offense to the players you have. Shurmer had the most successful year of any offensive coordinator in the Mike Zimmer era, when Shurmer coached a Case Keenum led offense to a 13-3 record. That year that Shurmer had showed that if you can adapt to the players you have, and rely on a great defense, you can have great success.

The only thing that I worry about Stefanski is actually not a worry about him, but a worry about Mike Zimmer. If the team isn’t finding success being aggressive, I hope Zimmer doesn’t try to influence the offense to play to not lose. By this I mean, Zimmer has had a tendency to seemingly tell his offense to try to run the ball and rely on the defense, even if it is not working. I hope Stefanski, and whoever the new offensive line coach will be, can get the boys whipped into shape to make a dangerous, balanced attack that can give the defense time to rest and play aggressive when they get on the field.

The Offensive Coordinator position has been under a tremendous amount of turmoil during Mike Zimmer’s reign as Head Coach. This is worrying, and the firing of John DeFilippo meant more instability for a struggling offense. So, when Kevin Stefanski explored his options this offseason, Vikings fans had reasons to worry.

On its face, Stefanski’s decision should have been an easy one. If we was offered a Head Coaching job, he should go. Otherwise, he should stay in Minnesota where he is familiar with the players and has play-calling responsibilities. But, there are reasons to believe his choice was not so simple, as I outlined in my previous article. Could Zimmer be hard to work under? Are Offensive Coordinators less independent in Minnesota than the public believes? Has Stefanski’s relationship with the Vikings’ front office been irreparably damaged? Are coordinators worried about becoming the next John DeFilippo, whose reputation took a hit during his stint as OC with Minnesota?

I suspect Stefanski’s second meeting with the Browns addressed exactly these issues. Cleveland had likely settled on the hiring of Freddie Kitchens as their new Head Coach, and were exploring the possibility of bringing in Stefanski as their Offensive Coordinator. Again, an Offensive Coordinator with more responsibility and control over the offense in Minnesota should be preferable to working under an offensive-minded Head Coach like Kitchens. But, underlying issues could push Stefanski to look to get out of Minnesota.

So, it is a profound relief to hear Stefanski is returning as Offensive Coordinator. Not only do I have faith in his abilities as a coach, with impressive wins over the Dolphins and Lions to end the season, but it also calms my fears about the overall health and stability of the OC position. I feel much better about the future of the Minnesota Vikings, and Mike Zimmer, with Stefanski choosing to return.

If you’ve followed purplePTSD.com/VikingsTerritory.com for any amount of time you’ll probably know that I react to “Big” Vikings news with a mix of emotion and rationality I like to call Emotionality (patent pending). That Emotionality reared it’s bipolar head this week with the announcement that the Vikings had retained Kevin Stefanski as their offensive coordinator for 2019. I had and continue to have a myriad of feelings about this move, the first and largest of which was a profound feeling of relief. Relief in the fact that Zimmer and company hadn’t run another coordinator out of town and relief that the Vikings didn’t have to scrape the bottom of the barrel to find a coordinator (since most of the people rumored to be of interest to the Vikings for the position had signed contracts elsewhere, which also lead to the feeling that perhaps no one wanted to join an organization that had fired John DeFilippo mid-way through a disastrous season).

I spend a lot of time interacting with our readers and with Vikings fans (and other writers) in general and because of that sometimes my initial views become skewed because a lot of Vikings fans are pessimists for obvious reasons. Because of the lack of offense this team was (or wasn’t?) able to muster under both DeFilippo and Stefanski, at least against good-to-great defenses, the move felt like something that was underwhelming at best and terrible beyond that. However, the difference between Stefanski and DeFilippo, perhaps hopefully, is that he’s been with the organization longer than anyone and because of that he’s been able to see what has worked and what hasn’t, namely under coordinators like Pat Shurmur. Shurmur was able to completely revitalize his reputation in a little over a season as a failed head coach to one of, if not the most sought after head coaching candidates with skill players that still are under contract for the Vikings.

The main difference between the Shurmur offense an the offense that Stefanski oversaw during the final three games of the season was one obvious one, the quarterback, and a few less obvious ones in the offensive line. Shurmur benefited from having a line with Joe Berger at right guard, which allowed Mike Remmers to play his natural position (right tackle). Nick Easton was also healthy for most of the 2017 season, which meant that the Vikings had a line of Riley Reiff-Nick Easton-Pat Elflein-Joe Berger-Mike Remmers. The difference between that line configuration and the one that the Vikings had in the 2017 playoffs and beyond should be apparent to anyone and it’ll also be the key to the 2019 season. As of the timing of this piece the Vikings have limited cap space to add any big free agents at the position, however they do have a draft coming up in late April that should allow them to mainly focus on rebuilding the unit (as they have limited needs anywhere else on the roster).

Give Stefanski and Kirk Cousins some time and you’ll see that this Vikings offense can compete with the best. They have tremendous talent everywhere on the roster (on both sides of the ball) and by bringing in the successful elements from the coordinators he’s worked under for over a decade, Stefanski should be able to bring this offense to the level we all hoped for when the team signed Cousins under a year ago. So, I’m very happy that this move was made and have high hopes, regardless of what fans are saying on our Facebook page.