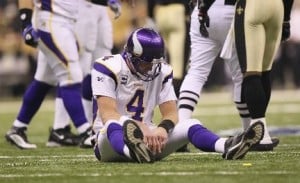 Growing up as a Vikings fan you become used to the team making a run once every seven to ten years in a way that really gets your hopes up. It’s not just that the team seems good enough to make the Super Bowl, but that they’re playing on a level that turns once indifferent children into weeping piles of mush come January. On a level that when looking back, feels almost mythical. On a level that makes you realize that the team definitely needs to strike while the iron is hot because you know that that opportunity doesn’t come every single season.

I was one of those indifferent kids in 1998 when the Vikings were undefeated in the pre-season and I vividly remember attempting to sneak into a dance at St. Anthony Village high school, getting caught and talking to the students there about Randy Moss and how amazing he was. It was then that I went from a “fan” who would rather ride my bike around Northeast Minneapolis on Sunday’s with my friends to one that would ride my bike through fire to ensure that I made it home in time to watch the Vikings game the following Sunday. I, like many fans, look back at those days as some of the best times of my life.

Because of that, we as Vikings fan still look back at certain years/seasons in almost a religious way. If you say 1998 to a Vikings fan they’ll know exactly what you’re talking about and will have a story about watching that game and how it made them feel. Everyone remembers where they were and what they were doing, on a level damn near their wedding day or the day their child(ren) were born. Closely behind 1998, especially for Millenials and those who weren’t old enough to watch the four Super Bowls or the “push off” game against Dallas, is (the) 2009 (season/NFC Championship). I can vividly remember sitting in my cubicle at work before that season, hitting f5 on Google News to see if there’d been any more sightings of Favre playing football with the Hattiesburg High School kids and then waiting to hear if he had returned on the private plane that owner Zigi Wilf had sent for him with Ryan Longwell and company aboard it. I was one of the rubes that went to Winter Park when Favre arrived and I honestly may never feel that mix of hope/excitement and genuine magic ever again. Had he rolled up in the pope mobile that day no one would’ve questioned it.

The difference between 1998 (or 2001/2007) and 2009 is the type of disappointment we felt as fans. After the ’98 game, people blamed Gary Anderson, who hadn’t missed a field goal or extra point all season, but of course missed a 39-yarder that would’ve iced the game. Some blamed then head coach Dennis Green, who decided to kneel before half-time instead of using the (then and arguably still the) best offense in NFL history to try to pick up enough yards for a field goal or just going deep to Moss. Point being, the blame fell on the team itself as opposed to the feeling in 2009 which was that the Saints and the referees were both equally to blame for a game in which their defensive game plan was to literally injure Brett Favre.

A year and a half ago I wrote an article that contained GIFs for every late hit the Saints had on Favre and the Vikings players in general because as time had passed I felt like non-Vikings fans had basically washed their hands of 2009 and were looking at the Saints Super Bowl victory as this magical moment for New Orleans instead of what it was, one of the most disgusting outcomes in sports history. The narrative that the Saints had successfully promoted was that the Saints were this amazing ray of hope for a city/state/region that really needed it, because of the aftermath of Hurricane Katrina instead of seeing it as it was which was a team that cheated it’s way to their first Super Bowl win while milking the collective guilt of everyone to do so.

When we switched to the new site format on purplePTSD.com, some of the articles didn’t transfer over, that being one of them. Otherwise, I’d share both the article and the response to it with you, although should this article get any traction I guarantee you’ll hear a lot of the same stuff from Saints fans that I heard then (and heard immediately after the game in 2010). New Orleans Saints message boards and it’s sub-Reddit found the article and shared their opinions on it.

The consensus was that I needed to “get over” the game and that the Vikings still had a bunch of turnovers and thus their objective cheating (per the NFL’s bounty-gate ruling) didn’t matter. That’s not an argument, that’s like saying we didn’t need to cheat but did anyway. Which is the same “logic” as the “get over it” “argument”, as they’re basically saying that time negates the reality that they cheated.

So, I initially didn’t want to write this piece because, while I don’t believe in the high road (especially online, because bullies/trolls/Saints fans interpret silence or the high road as weakness or proof that they’ve “won” and only exacerbates their behavior) I felt like there’s a lot more to talk about in terms of the Vikings and because we’ve added about ten new writers to the purplePTSD/VikingsTerritory network I didn’t want to bury someone else’s well-researched article with my emotional ranting. But, I ran across an article that outlined Saints receiver Michael Thomas Tweeting the following, and honestly just felt like I had to say something:

Hey Roger pick up the phone.

Essentially, Thomas like many of the Saints players and fans, are calling for a “re-do” of the NFC Championship. That’s something that’d be unprecedented and is also something that the rules might allow for. However and unfortunately (in general, not in this instance), the NFL is a reactive league and only changes rules when something horrible and embarrassing happens. For example, after the 2009 NFC Championship game, the NFL changed the rules for overtime. Now the league will most likely change the rules to allow teams to challenge pass interference calls to allow for the refs to check plays for those infractions.

It’s really hard to feel for the Saints, however, because they were on the other end of bad no calls back in 2009. While that was ten years ago the Saints still have the same head coach and the same quarterback, so it still feels like the same team to Vikings fans, especially when you’re dealing with the same fan base, a fan base that told me recently to get over 2009, that I needed to get a life, that X amount of plays don’t define a game. I really wish I could share screen shots of those responses from my article because I’m sure those same people are arguing that that one play was so unfair that the game needs to be replayed.

Because of that, I have to say… Yes! By your former “logic”, shouldn’t the Saints offense have overcome that no call? Shouldn’t the defense have stopped the Rams from getting in field goal territory, twice?

While it’s said that two wrongs don’t make a right, I believe that a team that used an objective mixture of not only cheating, but a type of cheating that was meant to end seasons/careers for opposing players combined with the fact that this was overlooked because of the feel-good nature of the Saints winning two years after Hurricane Katrina… Is just a terrible team/group of people from the top down. It’s gross and awful and because the fanbase not only defended it but reveled in it, which means that they deserve to feel how bad they feel right now as far as I’m concerned because we all felt that way in 2009 and still do feel that way. Sure, there were fines and suspensions in 2010, but that didn’t change the fact that the Vikings were robbed of their first Super Bowl appearance in decades or that had they overcome the cheap shots that Favre would’ve been sidelined thanks to an ankle that was the same color as the Vikings home jerseys.

I mean. Look at this and tell me you feel bad about ONE no call.

The final element of this awfulness is that the Vikings would’ve most likely started Sage Rosenfels or Tavaris Jackson at quarterback in the 2009 Super Bowl, or had the league allowed, a redo of the 2009 NFC Championship (since that’s what the Saints fans want now). So, not only did the Saints purposefully injure Favre to decrease the Vikings chances of winning THAT game, but they also basically were ruining any chance for the Vikings to win their next game(s, considering how Favre’s ankle felt months later). While you may argue that because the bounties came from then-defensive coordinator Gregg Williams (not Drew Brees or Sean Payton), the fact remains that they both benefited from it tremendously.

So, when I see Saints fans feeling bad for themselves all I can do is use their words against them and every argument they’ve had defending the 2009 Saints against them as well. Get over it. Get a life. It was one play. Boo Hoo. Excuses, excuses, and then add that karma is a B.

That’s not to say that I agree with those arguments, which’d be hypocritical. Rather, I want to show them how inane those arguments were and continue to be. The Rams even admit that it was pass interference and I am not arguing it wasn’t, just that if a bad no call had to end any team’s season I’m really, super glad that it was the Saints because perhaps they’ll finally begin to understand how we felt after 2009.

Editor’s Note: We are never going to go to a paywall system even as we continue to grow, but we could always use more budget to bring you all more amazing content and to accomplish our goal(s) of covering the Vikings for a living. With that in mind we’ve created a Patreon for those of you that like what we’re doing and would like to join our community! $5 (or more) a month would go a long way towards that goal, so we’d really appreciate it and either way will keep grinding to bring you the best content in the game!

If you want to discuss this piece with the author and other writers/readers from VikingsTerritory.com/purplePTSD.com and purpleTERRITORY Radio… Click Here to join our Message Board!