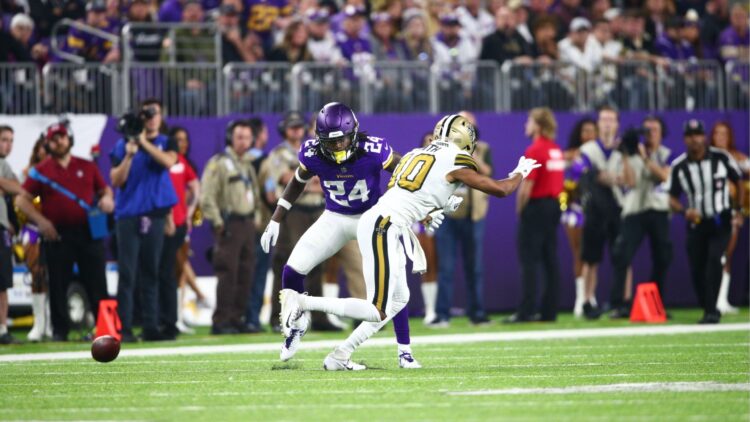 Holton Hill, one of the breakout players on the Vikings defense last season (along with safety Anthony Harris), will be sidelined for the first four games of the upcoming season thanks to a suspension that was just announced from the NFL (according to multiple sources). Hill has reportedly been suspended for violating the league’s policy on performance-enhancing substances, although which substance(s) Hill tested positive for have yet to be announced.

NFL announces that #Vikings CB Holton Hill has been suspended without pay for the first four games of the 2019 regular season for violating the NFL policy on performance-enhancing substances.

Hill joined the Vikings last year as an undrafted rookie free agent, despite the fact that he has the size and skill combination that makes most teams drool. Hill reportedly had “Character Issues”  and was suspended from the Texas Longhorns as a junior for violating team rules, (reportedly) stemming from an incident that involved marijuana and the police but no arrest (because it’s Texas and football, source: Varsity Blues).

It’s been quite the off-season for Hill, who was also reportedly with Vikes running back Roc Thomas when he was arrested for felony marijuana possession at his apartment in Mendota Heights. A warrant had been issued for Thomas’ apartment after neighbors complained about the smell of weed and when they entered Thomas’ apartment they found him with another man, who is rumored (but yet to be confirmed) to be Hill.

This can either serve as a wake-up call for Hill or the beginning of the end of his time as a Viking, but either option hurts the Vikings in the short-term. Regardless of where you stand on marijuana these days, the fact is that he knows why he wasn’t drafted and he also knows the expectations of his team and the league. Adding a PED suspension to the situation only makes things worse and that’s something that the Vikings cannot (and should not have to) handle at this point, as Hill got a decent amount of playing time during his rookie year. Add to that the fact that Mike Hughes is still rehabbing from his torn ACL and you’d think that the team would have been looking for more of the same this season.

Sadly and frustratingly, they’re getting more of another kind of same from Hill. That “same” is an inability to follow the rules and have some self-restraint. Zimmer doesn’t seem to be the type of coach that’ll put up with this, so, that means that they’ll either give him an ultimatum or… Draft another corner. The idea of which frightens me to no end as this is one of the most important drafts in team history, perhaps the most important. The team needs to get offensive line help after years of that position group being ignored in favor of the defense, namely the corner position. So, the last thing we needed before leading up to the draft was anyone, let alone a young corner, giving Zimmer a reason to start looking at his Lisa Frank trapper keeper full of corner prospects from the combine.