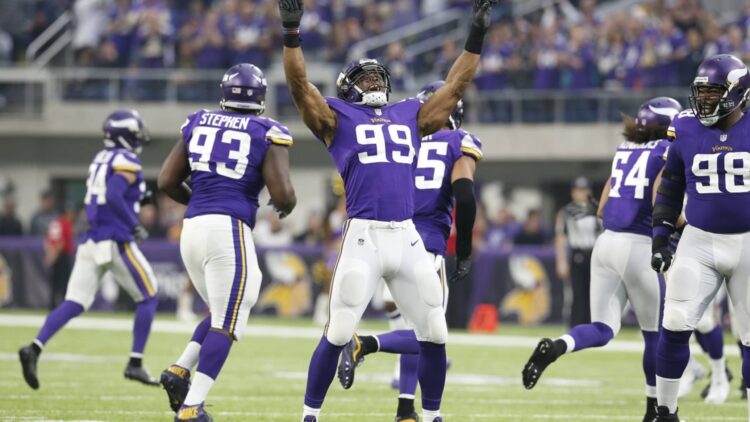 The Vikings needed a win after the tough loss last Monday Night against in Seattle, and hosting the hapless Detroit Lions (3-9-1) was just what the doctor ordered. The Lions, with their starting quarterback on the sidelines, put up little fight on Sunday afternoon at U.S. Bank Stadium, as the Vikings rolled to a decisive 20-7 victory.

The game marked a return to form for head coach Mike Zimmer’s defense, which had been reeling in recent weeks, and the offense did enough to secure a solid, if not slightly underwhelming performance. The game was the reset the team needed as it pushes for a playoff spot and there was really little to complain about in the game.

The win moves the Vikings to 9-4, a game behind the Green Bay Packers (who beat Washington on Sunday) in the NFC North Division. They Purple hits the road again to play the Chargers in Los Angeles next Sunday before returning home for the final two games at The Vault.

The defense must have read their clips this week. They came to play from the opening series (a batted down pass by Harrison Smith, another by Shamar Stephen and then a sack by Danielle Hunter), and continued it through the rest of the game. They weren’t perfect, and playing against a third string quarterback (see the throw on Harrison Smith’s interception) certainly helps. But the team shut down the Lions (who had played most teams close this season) allowing them just seven points and 231 yards in the game. The defense didn’t let the Lions on the board until near two minutes left on the clock. That is the kind of performance that head coach Mike Zimmer and all of the Purple faithful were looking for against the Lions.

Kirk Cousins looked sharp on Sunday. He had a couple high throws early, which has been a typical start for him this season, but once he settled in, OC Kevin Stefanski began rolling him out, where Cousins started throwing some darts. He threw a dart to Bisi Johnson in the end zone (albeit a little high, and Johnson made a great grab) and proceeded to move the offense down the field with more darts. By the time of the first drive of the second quarter, Cousins had already spread the ball around to eight different receivers (on the game he hit 12 different receivers, 11 if you don’t count Garrett Bradbury’s reception after a near pick by the Lions defense). He finished the game 24 of 30 for 242 yards, a touchdown and a 114.2 quarterback rating. Another solid performance for Captain Kirk, who is beginning to play his way into a contract extension.

The kicking game came through on Sunday. Following a game in which a missed extra point caused some consternation and stomach upset for folks still digesting Turkey day leftovers, Dan Bailey hit a fifty yarder to get the Vikings on the scoreboard for the only time in the second half. On the day, Bailey was perfect on two field goals and two PATs. Baily, together with punter/holder

Britton Colquitt (six punts for a 55 average) and long snapper Austin Cutting appear to have solidified the kicking game for Minnesota—at least for this week. Zimmer, the guy with the most churning gut when it comes to kickers, is the head coach, after all.

Bisi Johnson, among many other rookies this season, has been a quiet contributor. With Adam Thielen down for five games (and hopefully not counting), Johnson has taken advantage of it—grabbing his third touchdown of the season to open the game’s scoring. Johnson runs great routes, limits mistakes and generally grabs all his targets. The Vikings have found a third receiver in Johnson, who is only going to get better with experience.

Danielle Hunter feasted on the Lions rookie quarterback David Blough (in the first road start of his career). On the day, he had three sacks, but the first one set a new mark in the league. Hunter became the youngest player (25 years and 40 days) in NFL history to reach 50 sacks since they started tracking them in 1982. Not bad for “the project” who was taken in the third round of the 2015 draft.

Dalvin Cook came into the game with a bum right shoulder. So, those of us who follow him closely (you know those with him on their FF team) figured he would get limited duty. And he did. With a backup like Alexander Mattison in the stable, that has been the plan all season—limit Cook when you can to keep him fresh and healthy. Cook held up well (although gave way to Mattison a lot of the second half) and still provided some decent numbers—18 carries for 62 yards and a touchdown (thanks Dalvin). But the bottom line is that he came out of the game healthy and will be back in the lineup next Sunday.

Flag happy ref crews. This crew came in with the highest average of flags in the league and they kept that going on Sunday afternoon. On the day they threw 12 flags (a bit below their average. Were there penalties? Yes. Were they all legit? Probably. Do some of them happen every game and are let go by other crews? I would bet the answer is yes. Some more consistency, please. If this crew is consistently higher in number of flags thrown, perhaps they should be split up and brought into the normative rates of the rest of the crews in the league. There are always going to be disparities, but an attempt toward more consistency would be appreciated.

So what is exactly the plan with Xavier Rhodes now? Rhodes was dressed and active for the game, but he didn’t see much action in the game. He got in for a couple plays at the end of the first half and then was on the field for the first series in the second. Spot duty for Xav—is that the new norm? Get his head back together after last week’s meltdown? Fine. Keep him fresh and split time with Mike Hughes and Holton Hill? Okay. He acquitted himself well in the time he was in and he came up lame in a collision with Harrison Smith. But I think we will see him next week. It will be interesting to watch as the season heads toward the playoffs.