In Retrospect… was Cousins’ Contract a Bargain? 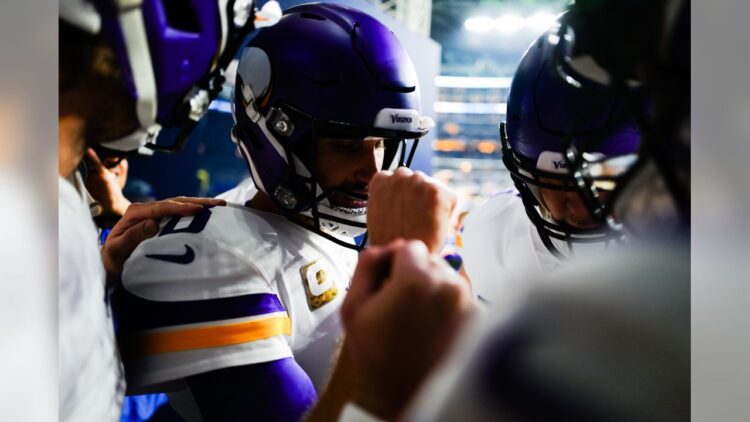 Editor’s Note: This article was originally posted on our sister-site, purplePTSD.com, yesterday morning (before Monday Night Football). Not that that changes the argument, but that game wasn’t included in the numbers for that reason.

I’m sure everyone reading this article has seen in the comment section of any article about Vikings quarterback Kirk Cousins (or the team in general), talk about his “massive” contract. Now, I put the word “Massive” in quotes because everything in professional sports is relative. Even the smallest NFL contracts make the money you and I make each year look minuscule. So, yes, the $84 million dollars that the Vikings guaranteed for their quarterback, Kirk Cousins, last off-season is a lot of money (to you and I) and it WAS a lot of money in terms of NFL contracts. So both in terms of real-life and in terms of what people were used to in the NFL. The thing is, and this is the point of this article, is that it is no longer as insanely expensive as it seemed at the time in terms of what contracts are and can be in the league we all love so much.

Cousins’ contract was a game-changer, sure, but taken literally (as it was), that means that it also dictated how much money other quarterbacks received when signing extensions post 2018. So, armed with what we know now, Cousins’ deal wasn’t as egregious as it seemed at the time and considering his high level of play this season, it is and was actually a bargain.

Per Sportrac.com, Cousins’ contract as a percentage of the Vikings’ salary cap in 2019 is still a lot. I could explain it, or I could just share their breakdown (which is much nicer than any words I could string together whilst furrowing my brow). 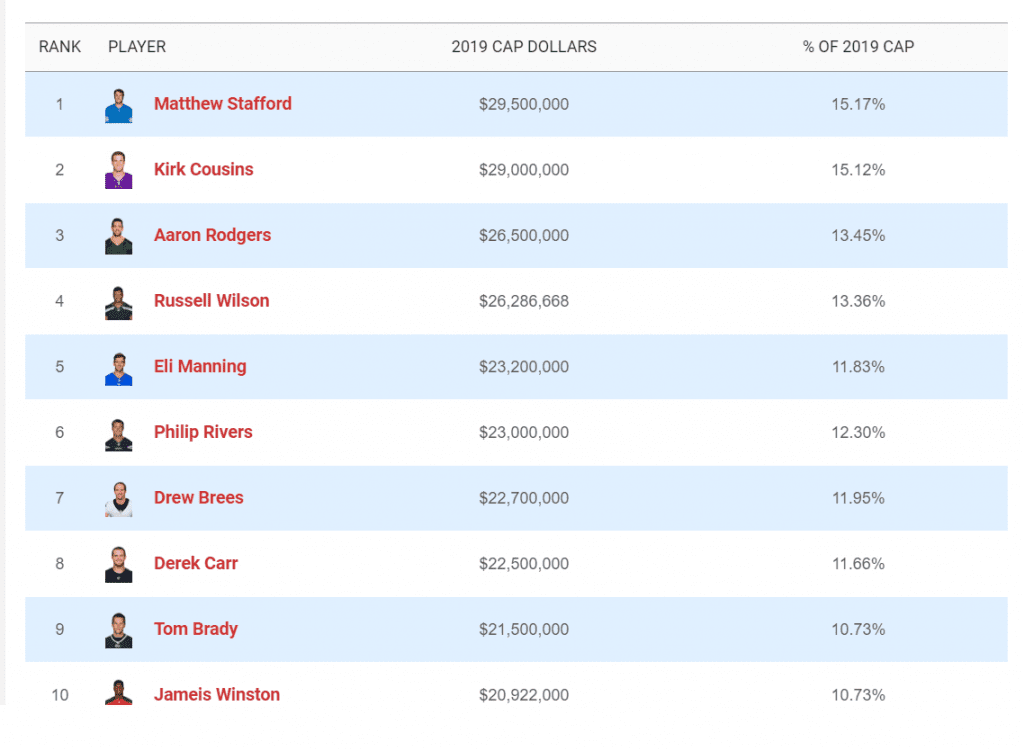 As you can see, the Vikings rank second in the NFL in terms of what they spend on the quarterback position as a percentage of their cap at 15.12%. That amount is only trumped by the lowly Detroit Lions, who spend a bit more on veteran underachiever Matthew Stafford. However, things change dramatically in 2020. Let’s take a look… 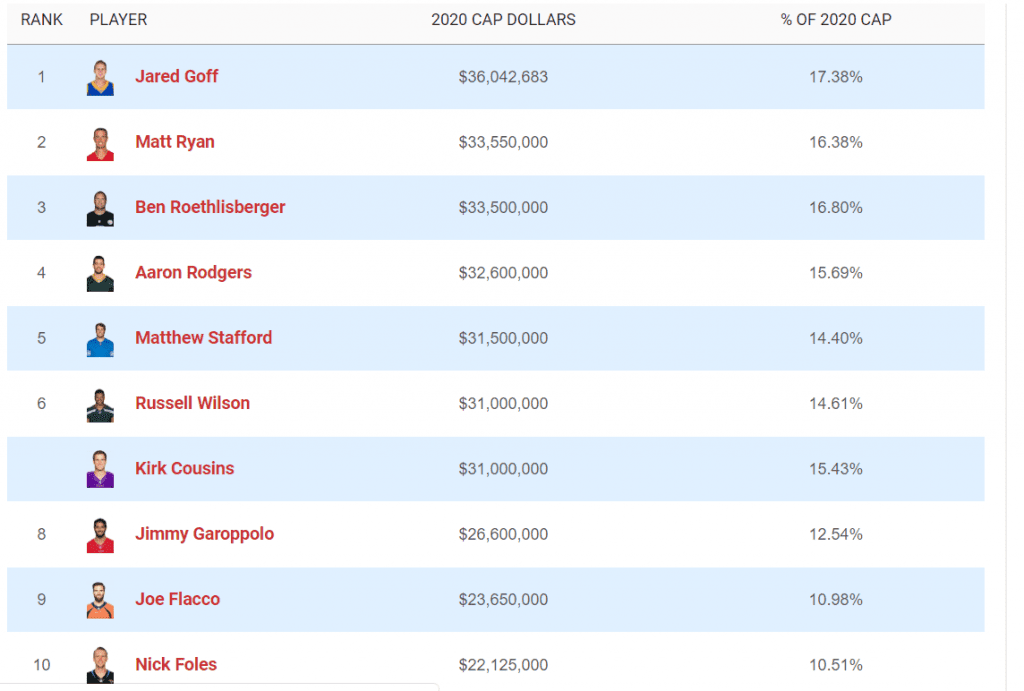 As you can also see, Cousins/The Vikings drop to seventh in terms of their percentages in 2020. That makes sense, as established or elite (or both) quarterbacks used Cousins’ deal as leverage for a much more lucrative extension beyond this season. Regardless of what you think of Cousins, considering how he’s performed in the vast majority of this season, his deal is much better than the deals that QB’s like Jared Goff received. The same could be said for Matt Ryan, who you’d think would get some of the flack that Cousins’ received as a “stat-padder” considering his personal output vs. the success (or lack thereof) of his squad this, and last, season. The same could be said for Goff, who “lead” his team to the Super Bowl last season. However, Sportrac’s list isn’t the only metric people are using to determine the value of a quarterback as compared to his contract. An article from today from The Washington Post’s Neil Greenberg, titled ‘Kirk Cousins went from bust to bargain this season’ outlines a pretty nifty metric for examining just that. In his article, Greenberg uses a metric from TruMedia that breaks down expected points added per game from the addition of a new quarterback. After finishing as the 14th “best” passer in the NFL last season, Cousins only added 0.2 expected points (which is, according to Greenberg “the number of points scored above what we would expect given the down, distance and field position of each play”). How they determine that I’m sure is reliant on some fancy algorithm that’d give me a nosebleed, so I’ll just take their word for it.
Comparing that performance to Cousins’ 2018 salary, Cousins only “earned” $1.1 million in cap dollars in 2018 (compared to his $24 million dollar cap hit). So, yeah, I get the frustration from last season even if I don’t really agree with the logic (as the offense was a complete mess last season from the line down to the running back, all the way up to the offensive coordinatorS (plural)). But, again, let’s take this as gospel for the sake of argument as it at least is consistent in analyzing quarterback play solely, so it’ll give us an idea as to what Cousins’ performance means in 2019.

Speaking of which, Greenberg discusses the early-season woes of Cousins and the Vikings, then goes into Cousins’ post Week 4 breakout. According to Greenberg/TruMedia, the Vikings offense is scoring eight points per game more than expected on Cousins’ throws (that includes Weeks 1 through 4). That means, according to their metrics, that Cousins is performing at a level that’d require a salary this season of $47 million. That amount is so high that it almost makes up for 2018, bringing his total earned salary to $48.3 million of the $53 million he’s made.

You can see that below, courtesy again of TruMedia and Greenberg (as well as The Washington Post): While I’m sure some of you are arguing that it’s Vikings running back Dalvin Cook, not Cousins, that has improved the Vikings offense (which isn’t how football works), Greenberg discusses that as well.

He states that while Cousins “improvement has coincided with an improved Minnesota rushing game”, he continues that “…not all of the Vikings’ offensive progress can be attributed to the emergence of Cook”. Why?

Despite Cook’s massive numbers, according to Football Outsiders’ Defense-adjusted Value Over Average (the DVOA you see NFL analytics guys talking about on Twitter right before your eyes gloss over and you time travel to the next morning), the Vikings “only” have the 10th-best rushing attack in the NFL (as opposed to one of the top two or three). DVOA compares “success on every play to a league average based on situation and opponent”. So, basically, what the Vikings and Cook pick up on first-and-ten from the Packers 25 vs. what other teams have or would. The passing game, by comparison, “enjoys the fifth-best passing efficiency, per the same metric”.

Point being, let’s give Cousins some credit. I wrote an excruciatingly long piece about that last week. Titled, ‘Is Cousins the MVP? Does it Matter?’, the piece explains that, no, Cousins isn’t the MVP. So now that we’re done arguing an (mostly) arbitrary and subjective award, let’s at least give the guy credit when credit is due.

I’ve seen every excuse in the book thrown at Cousins this season as those who were so glad to call him a bust attempted to explain away his success, lest, god forbid, they have to admit that perhaps they were wrong. Simply because Cousins didn’t perform up to (HUGE) expectations in 2018, doesn’t mean that he won’t or can’t in 2019. That’s, again, not how football works. Now that he has some semblance of an offensive line/run game/consistent offense strategy (none of which he had in 2018), he’s shining. Yes, he is also surrounded by nearly unmatched talent at every skill position, and yes he’s not perfect. But, that’s why the Vikings made the move to get him, isn’t it?

The idea was that the offense in 2017 wasn’t matching the level of the defense, despite having a lot of talent on the roster. That was partially due to the fact that their quarterback, Case Keenum, couldn’t make and wasn’t allowed to make every throw on the field. That limited the Vikings’ playbook, their options and eventually their season. The idea was that if they could find someone who could make those throws, it’d be hard to stop this team considering the talent they had on defense. For a team that allowed under 16 points a game in 2017 on average, the idea of a team that could put up 26.3 points per game (as they are in 2019) was something the Vikings front office couldn’t, and shouldn’t have, pass(ed) up.

For the most part that’s what we’ve seen since Week 4. Except now it’s the defense that’s performing under expectations. While that’s a topic for another article, the reality is that Cousins is not only performing up to his contract in 2019, he’s massively exceeding his contract value. While that may mean scary things for the Vikings post-2020 (when Cousins, by design, is set to sign a new contract with the Vikings or elsewhere), it means that we should not only be relieved in 2019, but ecstatic, in terms of the play from Cousins.