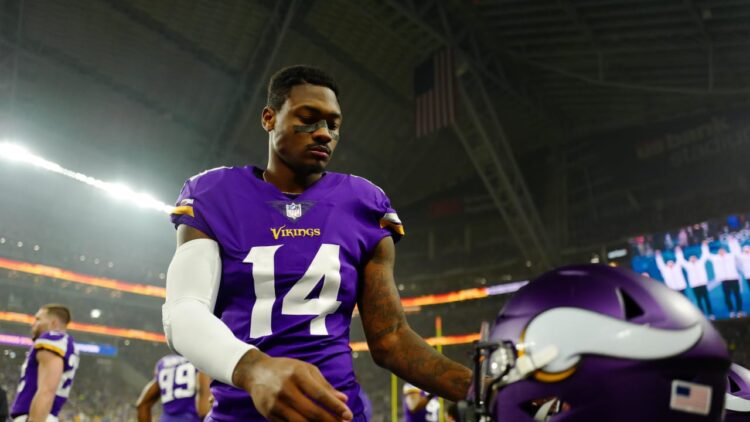 In a tale of two halves, the Minnesota Vikings came back on the Denver Broncos from 20-points down at halftime to win the game 27-23 in dramatic fashion. The comeback tied for the fourth largest in Vikings history and it took every unit on the field to come out of the locker room and correct the many errors from the first half.

The comeback (not a benchmark of the Purple’s quarterback) was so improbable that it was the first time in head coach Mike Zimmer’s tenure to complete such a comeback (zero of eight previously). Want more? It was the first time (in 100 instances) league-wide over the past five years in which a team has come back from 20 or more points down at halftime. And it came against the number four defense in the league coming into the game.

The team stunk in the first half and the Purple faithful in the stands of U.S. Bank Stadium let them know it. And according to Zimmer, they had it coming.

“They booed us at halftime, and we deserved it,” Zimmer told KFAN radio. “But the second half we started playing better and they started yelling a lot more. It was nice and loud for them the second half.”

The win moves the Vikings record to 8-3 and still a half game behind the Green Bay Packers (who were idle this week) in the NFC North Division. The Vikings themselves, move on to their bye week and then return on December 2nd to take on the Seahawks in Seattle. The team had better rest up since the games don’t get any bigger than that one.

Kirk Cousins, who came into the game ranked as the third best quarterback in the league, played another decent game and led his team to one of the biggest comebacks in team history. He didn’t get a lot of time in the backfield in the first half—whether it was on the offensive line, Cousins holding the ball too long or the product of a really good Broncos front seven—and the offense got shut out at home in the first half.

But they went to the locker room, changed things up a bit playcalling-wise and played with a sense of urgency (often going to the no-huddle) and proceeded to turn things around from a half in which they only had 41 total yards and four first downs. And Cousins had plenty to do with it. He threw three touchdown passes (including a beautiful 54-yard strike to Stephon Diggs on the money and in stride) and ignited the offense. He finished 29 of 35 for 319 yards, no picks and a 133.2 quarterback rating. The critics are rarely quiet when it comes to Cousins, but a game like has to settle some down over the next two weeks.

The Vikings tight ends were instrumental in this game. Cousins hit rookie Irv Smith, Jr, for the team’s first score on the opening drive of the second half—and his first touchdown of his career. Smith (three catches for 20 yards) was bested by his partner in crime Kyle Rudolph, who made  five catches for 67 yards and the team’s fourth score that put them in the lead for good. Even Tyler Conklin got into the act with two grabs for 28 yards—one on a big third down play. The tight ends have been relatively absent from the offense (even though it has always been a staple of Gary Kubiak offenses), and the confidence is growing in the room—as the number pf opportunities like they saw today continue to increase.

“We feel like we have the best room in the NFL,” Rudolph told KFAN. “We’ve got three guys who go out there every day and make plays to help this team win and we showed it today.”

The offensive line in the first half gave Cousins little time and Dalvin Cook little room to run. They battled against one of the best fronts they will face this season and were losing the war for the first 30 minutes of the game. They tightened things up in the second half as the offense went to the no huddle, play action passes and getting the quarterback out of the pocket. They gave up five sacks on the day (most of which Cousins blamed on himself), but there were some struggles. But they deserve credit for not knuckling under and fighting throughout the second half for the win.

Stephon Diggs, like most of the offensive weapons on the Vikings, was non-existence in the first half—we wondered if he was on the sidelines with his injured buddy Adam Thielen. He caught one pass for 34 yards in the first half, but it was called back on a penalty on the offensive line (see below). Then in the second half he became the go-to guy when he began to beat some double coverage and Cousins was able to find him. Diggs caught five balls for 121 yards and a pretty score and made some tough shorter catches that kept drives going for Minnesota. It is a testament to Diggs and his teammates that they kept grinding and finding a way to pull this game out.

Dalvin Cook had a tough time finding any room to roam against the tough Broncos defense, but you can’t hold him down forever. Cook kept battling against a stout defense and finally did finish the game with five receptions for 31 yards and had 26 yards on 11 rushes (a paltry 2.4 average) and the team’s third touchdown. It is not a line that will make his fantasy team owners happy (myself included), but Cook remains the most vital cog on this offense. He took a back seat to his quarterback in this game, but it was good to see that if you can take away Cook, you can’t necessarily shut down the Vikings offense (for 60 minutes, anyway).

The defense spotted Denver a 20-poit lead in the first half. Sometimes it was bad defense, sometimes it was penalties, sometimes it was some bad luck in good coverage, but it ended up being really bad on the scoreboard. The letdown we feared (see below) was in full flower on this side of the ball. To their credit they gave up only three points in the second stanza, and that might be the best you can say about the defense on this day. They lost Harrison Smith to a hamstring injury, so he and the rest of the defense will want to regroup and get back to playing like they can,

Slow starts. We all worried about a letdown after the big win over the Cowboys in Dallas last week. I certainly was. With the bye in the offing, you’d think you’d want to come out and give it all you got and then take a break. Not the mentality of this team somehow. They showed plenty of heart in the second half and will likely enjoy their break a lot more than they would have if they had lost.

Losing to backup quarterbacks. Brandon Allen was playing in his first road start as an NFL quarterback and he jumped out to a 20-point halftime lead over the Vikings. He looked like he was going to be the third backup quarterback this season to beat the Vikings, but it didn’t happen and the team was lucky to avoid it. Just because there isn’t a lot of tape on these backups, that shouldn’t be an excuse for them beating up the defense so badly. They need to figure this out.

Penalties hurt the Vikings in the first half. A hold by left tackle Riley Reiff (questionable) negated a 34-yard pass play from Cousins to Stephon Diggs and a jump start to the Vikings offense. The next defensive series a hand in the face by defensive end Everson Griffen prevented the defense from getting off the field on a third down. Two killer penalties of the four (for 44 yards) in the first half. Then, lining up to defend a punt on special teams, Eric Wilson gave Denver a second set of downs in their first drive in the second half—just when they were about to get off the field. You can’t have this and expect to win football games.

Fumbles. One on a kickoff return by Ameer Abdullah and another on a punt return by Mike Hughes. The Vikings dodged bullets on both mistakes (one of them thanks to safety Andrew Sendejo’s interception), but that is not the way it always happens. Might need to go find Marcus Sherels for rest of the season.