Bradbury, Smith Jr., Taylor and Blasingame have all Arrived in Different Ways. Will they Contribute in 2019?

Come as you are.

It could be Minnesota’s mantra in 2019. The Vikings are looking to improve on a 2018 performance and an 8-7-1 record that saw Mike Zimmer’s squad fail to make the postseason. The offseason overhaul this year has meant adding new faces via the NFL Draft, free-agent signings, and scooping undrafted guys from the NCAA level.

Preseason prognostications put the Vikings in competitive territory. ESPN pegs their likely record at 10-6 while Oddschecker has Minnesota’s chances to win Super Bowl LIV in the top half of the league.

Here’s the skinny on four new players ready to contribute for the Purple and Gold when the 2019 NFL season gets underway in August as I see it as someone who follows the Vikings but who isn’t necessarily a fan.

The Vikings filled a critical need on the offensive line by drafting Garrett Bradbury of out NC State with the 18th overall pick. He’s a versatile position-filler who can plug the center hole left by Pat Elflein’s move to guard. He can also play at left guard, a slot vacated by the departure of Nick Easton.

Bradbury offers much-needed protection for QB Kirk Cousins and a run game that struggled a year ago. The hype around Bradbury is real as his tape shows a very dominant player who will massively impact the Vikings’ offense in a couple ways.

No one is happier with Bradbury’s arrival than Elflein, who enters his third season in the league. “I was excited we were getting another great lineman…we got a better unit as a team when we drafted him,” said Elflein. He has also said that he feels “more comfortable” at guard than center, so the Bradbury pick actually improved two (much needed) positions on the Vikings line, which was really their main and only point of weakness in 2018. However, it also happened to be the, arguably, worst position group to have that weakness and so it’s exciting to think what this Vikings team/roster could do with some time and a decent running game.

Because of that I believe that the Bradbury is one of the best picks in the 2019 NFL Draft. 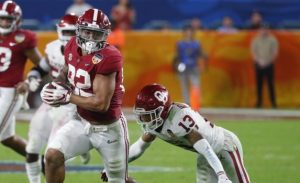 An ideal F-tight end, Irv Smith Jr. is set to make a splash from the beginning. The second round, 50th overall draft choice from the University of Alabama gives Cousins a target in the middle of the field and a completely different kind of tight end than they have in Kyle Rudolph. Which should create all sorts of mismatches when the Vikings run their two TE sets this season.

Expect to see Smith used in a variety of aggressive roles lining up in the slot, backfield, or wideout positions. The 6-foot-2, 242-pounder is also a speed threat. He clocked the third fastest 40-yard dash among all tight ends at the NFL combine with a 4.63-second run. He is also no slouch when it comes to blocking, something that Rudolph has struggled with, so he might end up getting more opportunities than some expect early and often in 2019.

Having two pass-catching tight ends in Rudolph and Smith Jr. is something that the Vikings have wanted for years. It’s exciting that they have such diverse talent at the position now (at least on paper) and considering the fact that they have the best 1-2 punch at the wide receiver position in the league, it’s exciting to think that they might have something similar at the tight end spot. That’d create a pick your poison situation for opposing defenses and with Cousins having time (again on paper) to deliver the ball in 2019, the sky could very well be the limit for the Vikings. 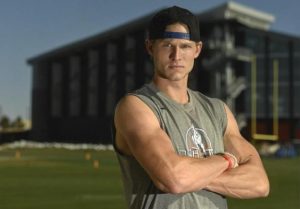 Coming over from Denver is Jordan Taylor, a strategic free-agent signing. Taylor’s four seasons with the Broncos were spotty due to injury; he missed the 2018 campaign due to hip surgery.

However, he’s been productive when healthy, generating 351 yards on 29 receptions in 26 appearances over the 2016 and 2017 seasons. Taylor offers another downfield threat for Cousins if he can stay off the injured list.

With a one-year contract on the book, the Vikings haven’t given up much to take a shot on Taylor, however, if you combine the fact that he’s one of Kubiak’s guys and the great start he’s had with the Vikings at OTA’s (with more circus-like end zone catches) and it’s not hard to see why Taylor has a gigantic lead in the WR3 competition.

He also brings something to the Vikings passing game that they haven’t had, and that other receivers competing for the third spot can’t. That’s his size. He’s 6’5″ which makes him the tallest receiver on the depth chart and it’s not hard to imagine the Vikings lining him up alongside Kyle Rudolph in the red zone to create height mismatches, especially against nickel corners who are typically sub-5’10”. There was some concern that he might start off slow because of the double hip surgery that caused him to miss most of the 2018 season but since that clearly hasn’t happened, it looks like Taylor is going to be the reliable WR3 that the team needs. 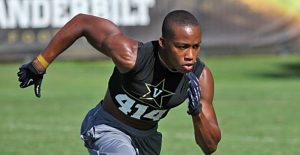 Overall, The Vikings received a B+ from NFL.com’s Gennaro Filice for the 2019 draft class, the best showing in the NFC North.

But not every newcomer entering the team from the college ranks was a draft pick. Case in point is Khari Blasingame, an undrafted free-agent pickup.

Blasingame spent his college days as a fullback for the Vanderbilt Commodores. He amassed 401 yards and five touchdowns on 96 carries during his senior campaign in Nashville last season. He also nabbed 25 passes for 320 yards.

The run/pass diversity Burlingame brings to the club is a welcome addition. Expect to see him on some creative plays and special teams assignments especially come training camp. With a roster as stacked as the Vikings roster spots will be a premium and with C.J. Ham already on the roster as the shoe-in fullback (as well as Dalvin Cook, Ameer Abdullah, Mike Boone and Alexander Mattison on the roster as well), he might end up on the practice squad even if he physically reminds one of the recently departed Latavius Murray more than anyone else on the roster.

Knock on wood time. Should Dalvin Cook suffer another injury that requires him to miss time, you could see Blasingame get called up from the practice squad and never look back.