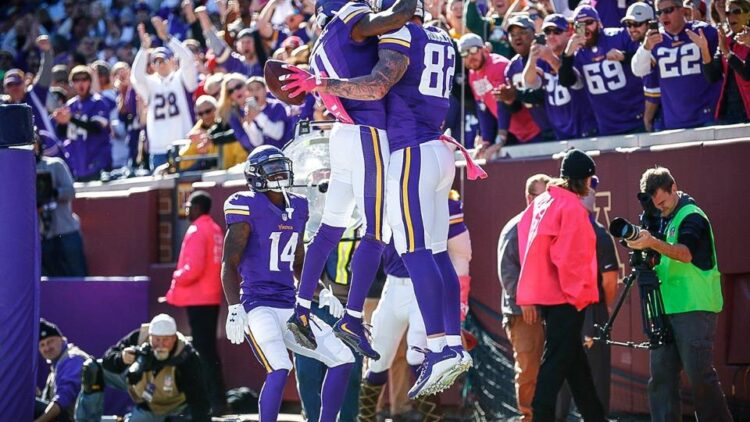 One of the main stories of the off-season thus far, which is as omnipresent and increasingly frustrating as gopher warts in the dorm rooms of the East Bank at the U of M, is the “will they or won’t they” story surrounding Kyle Rudolph. The story has been written about multiple times on our network (and every other Vikings news site) and from every angle, so we won’t delve into the details here (thank god). The Rudolph story, while interesting (at first) and important in terms of the Vikings offense this upcoming season, is actually a great example of a larger story that people have alluded to but not necessarily confronted head-on — like the first of many gophers warts — and that is that the Vikings are clearly all in when it comes to their goal of winning a Super Bowl this season. In every sense of the word. From the roster to the salary cap. While it may not necessarily be “now or never” for the purple and gold, this upcoming season may very well be their best chance to win the first Lombardi Trophy in franchise history.

There have been other times, especially recently, where it seemed like the Vikings were all in. But to really understand what makes one season more “all in” than another, we first should define exactly what I’m talking about when I say that, as there are multiple meanings and levels of doing so. A good example is the first-round pick that the Vikings traded to the Philadelphia Eagles after Teddy Bridgewater’s knee (and subsequent career in purple) exploded during a non-contact drill at Winter Park (and not the Twin Cities Orthopedic Center, which’d be too ironic, even for the Vikings).

Articles from that time mention the Vikings’ Super Bowl hopes being dashed by that injury, and so it’s important to remember that the Vikes’ Super Bowl “Window of Opportunity” has been open at least since Blair Walsh’s kick somehow sailed wide left on a 27-yard field goal during the 2015 playoffs. The Vikings have been aptly aware of this, and after Teddy “crumpled” to the field at Winter Park, they used a first and fourth-round pick to snap up the Eagles’ Sam Bradford. That move felt like a win-now and screw-the-future move, especially since Vikings general manager Rick Spielman loves him some draft picks, especially first (and seventh) rounders. So when I say they were all in, I mean that.

The Bradford move, which was made out of a mix of desperation and the belief that the Vikings couldn’t take a year off from their league domination plans, showed that the Vikings’ ‘powers that be’ really did consider the team to be on the cusp of something special at the time. That feeling only increased when they started that season 5-0, and the subsequent season when they made it all the way to the NFC Championship game with Bradford’s back-up Case Keenum. Despite those glimmers of hope (and proof that they were on the right track), there was always some cap space left the following off-season for the team to improve their points of weakness and to sign some of their young core to long-term contracts. At no point during the past few off-seasons did the Vikings risk losing some of the players that they’d developed. That simply isn’t going to be the case next off-season. And frankly, it isn’t really the case right now (hence all the restructures to simply re-sign players or to even sign draft picks).

With the roster quite possibly being the best it’s ever been to the amount of cap space the team has left, the 2019 Vikings are the apex of what general manager Rick Spielman, head coach Mike Zimmer and team cap guru Rob Brzezinksi have been building this decade.

That previous financial flexibility and the belief that they were super close to finally winning a Super Bowl explains why they offered the largest contract (at the time) in NFL history to Kirk Cousins. And it’s his contract that people point to when they talk about the current salary cap issues that the Vikings have. That’s where the Kyle Rudolph situation comes in.

The Vikings have reportedly asked Rudolph to restructure his contract to lower his 2019 cap hit in order for the team to do simple things like, you know, sign their 2019 draft picks, or enter the season with enough cap space to sign a veteran should the team lose a key piece to injury. Luckily for the team, other players have been willing to restructure, whether it’s been taking less money like defensive end Everson Griffen or converting their salary to a “signing bonus” ala Eric Kendricks (to sign first-round pick Garrett Bradbury). This proves that while Brezinski has been masterful at making the numbers work, the Vikings have clearly run out of money.

That’s not a good sign for next season as there are a few core players that the team will need to re-sign regardless of how the 2019 season ends. The following notable Vikings will be unrestricted free agents after the 2019 season (as of the writing of this article):

The team will also have the option of adding another year to Everson Griffen’s contract. While that list might not necessarily strike fear in the hearts of some Vikings fans, especially when it comes to Treadwell, we’ve all seen how long it takes Vikings corners to acclimate to the NFL. So with 2018 first-round pick Mike Hughes coming off of an ACL tear, it’s safe to say that he won’t be able to replace Waynes or Alexander’s output this season or next.

On the other side of the ball, second-round pick tight end Irv Smith Jr. simply isn’t the same style of tight end that Kyle Rudolph is, and there’s no guarantee that he’ll be able to become the reliable end-zone target that Rudolph has been — especially as it typically takes time for tight ends to acclimate to the speed and strength of defensive players in the NFL.

Then there’s Everson Griffen, who the Vikings have the option of resigning (club option). Whether or not that happens depends on how well Griffen bounces back from a down season where he missed multiple games, and in which his impact dramatically declined in the games he was able to play in. There’s no reason to think he won’t bounce back, which means that he could be up for a relatively large contract (as he has flirted with breaking records in recent years). Even if he doesn’t match that output he still could land a large contract via free agency (as pass rushers typically cash in and he’d only be around 32 next off-season).

Sure, there are a lot of ways that the Vikings could make all of this work. They’ve shown the ability to make the numbers work in recent years and the NFL’s salary cap does increase every year. For example, a lot of people are pointing towards Cousins’ contract (again), and/especially if things don’t pan out this year it’d be surprising if he didn’t take a pay cut (or if things do go well they could offer him an extension beyond 2019 that’d include a lower 2020 cap hit). Then again, Cousins is one of a couple of Vikings players that are on Cameo.com, which is a site where you can pay famous people to send 15-to-30 second video notes to family or friends (or in the case of Brett Favre, white supremacist groups). Despite his massive contract, Cousins is on that site, spending his limited free time to get $500 a pop to say Happy Birthday to people’s dads. That’s not a joke (not that being frugal or liking money is a bad thing, which is why we offer a playMGM bonus code, but still, the fact is that he doesn’t really need the money). Then again, some have said that Cousins is over-prepared when it comes to the game. So maybe we should look at any amount of time he doesn’t spend obsessing about football as a positive…

The point of all of this is that the Vikings roster as we know it, and have known it in recent years, will definitely be different next season. That’s always the case in the NFL. But what’s been special about the Vikings under Spielman/Zimmer/Brzezinksi is their ability to keep their core players together more so than any other team.

While it looked like that was going to change this year as defensive leader Anthony Barr was set to join the Jets (who seem obsessed with Vikings players recently with Teddy Bridgewater joining them and even practice squad players like Jeff Badet almost joining them before the Vikes stepped in and paid him to stay), he ended up staying with the Vikings, a sign that the players are also all in when it comes to winning a Super Bowl this year.

It’s safe to say, though, that the Vikings simply won’t have the money to keep some of those leaders next year. So, if they’re going to make another deep playoff run, 2019 is the year. It’s at least their best shot at doing so.

That might be asking too much of some of the rookies they added in last month’s draft, namely on the offensive line. With Garrett Bradbury starting at center at this week’s OTAs and former center Pat Elflein moving to guard, that leaves the right guard position — which is arguably the easiest position on the line to acclimate to (or at least the position with the least amount of pressure on the line) — to rookie Dru Samia, who played on the best line in the country last season at Oklahoma, to other recent free agency signees like Josh Kline, who hasn’t missed a game in a few seasons. Brian O’Neill is entering his second year at right tackle and he’ll have more help next to him regardless of who ends up starting. Bradbury is a stud and shouldn’t have any (major) issues transitioning to the NFL and Elflein had a stereotypical sophomore slump but he’s going to be healthy this season and he said that he feels more comfortable at guard. That leaves left tackle Riley Reiff, who should get more help on the blind-side.

The Vikings roster will be relatively stacked at each position in 2019. While it might be stressful to think that this is the year that they’ll have their best chance to be the best team in the NFL, it’s also safe to say they arguably have the best or most complete roster in the league. That brings us back to the Kyle Rudolph situation.

Losing a leader on the offensive side of the ball, especially for a team that has big question marks at the third wide receiver spot, would be a big loss. But, it could be a sign of things to come. Thankfully, the irritating fact that this situation seems to never end means that the window to trade Rudolph is probably closed. So, one way or another, Rudolph should be in purple and gold come the start of the season. Dressed for a team that has the most talent on a per position basis in my lifetime. That might change next year, for Rudolph and the team in general, so the Super Bowl window has never been more wide open.

Let’s hope they finally take advantage. It may never be this open again.