Vikings Need To Point The Truck At Mack 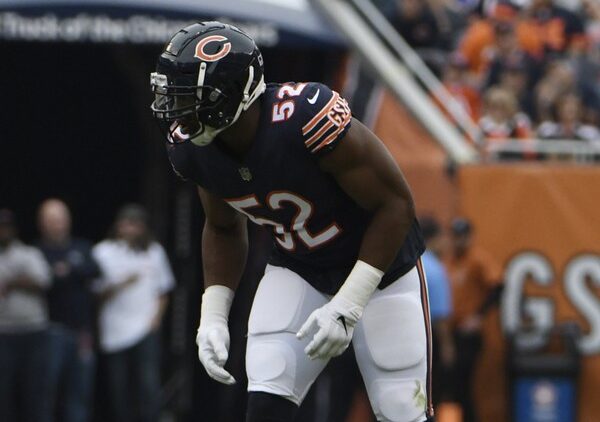 The Chicago Bears added Kahlil Mack to an already formidable defense last season, and the hybrid linebacker took that team to another level in 2018. Is there any way the Minnesota Vikings can affect Mack’s dominance on this coming Sunday?

Of all the teams that could have been augmented by the defensive player in the game, of course it had to be the Chicago Bears.

Former Bears head coach John Fox and current defensive coordinator Vic Fangio had already built a good defense in Chicago, and Fangio was kept in charge of the unit as new head coach Matt Nagy, an offensive specialist from Kansas City, came aboard to run things.

It took them from very good to superlative, and, at times, dominating. Mack’s presence on the edge of the Chicago defensive line made the Bears’ attack a dangerous riddle to solve on every down.

In 2019, they look like they’re just as good, if not better after three games.

So how do the Minnesota Vikings face the problem that Mack and his impressive squad present?

The first thing Minnesota has to do is face it. Don’t run away from Mack in this game. If they want to be a team that can generate yards with a power running game, they should show the Bears that they are not intimidated by one player.

Use blocking combinations to game the game right at Mack. It may not show dividends right away, but they need to try to intimidate and tire the game’s best defensive player.  He’s a powerful dude, but there’s only one of him.

Point the truck at him and hit the gas. This will most likely be a game that is decided in the second half, and the Vikings need to prove they can put some tread marks on the Chicago front seven.

A Sense Of Urgency

The Vikings’ play-action needs to be precise and direct. Kirk Cousins must have a stop-watch in his head and deliver the ball quickly. Replace blitzers and stick those reads, they won’t be open long.  Pressure will be there–early and often.

If everyone’s covered–get rid of the ball!  Sacks will give the Bears some of the momentum they used to beat the Vikings twice last year. New Bear defensive coordinator John Pagano has supervised a defensive that has zero-to-few weaknesses, and he’s letting his boys fly on Sunday, just like they did in 2018.

That means he’ll let Mack loose to do what he does best; rush the passer and hunt the ball down.

Don’t let him do it. Let’s see him shed a few thousand pounds of Viking guard and tackle coming at him and see if he can find a Viking running back. The Minnesota zone-run scheme will make it more difficult for Mack to dominate from the first point of attack he consistently won last year.

Vikings’ OC Kevin Stefanski needs to challenge his offensive line and his running backs to put there money where their mouth is. These guys want to “pound the beef”? Then pound it. With any success, very good things will happen. This game is a big task that will require a big effort from the Vikings up front. If they have any pride, they’ll remember the beat-down they took from this defensive line last season.

They’ll also know that with the Packer’s loss on Thursday night, this game just got added value. The winner sneaks to just a half game behind Green Bay for the lead in the NFC North.

After their game in Soldier Field, the Vikings have a trip to the Meadowlands to play the 1-2 New York Giants, then remain at home for three solid weeks to play Philadelphia, Detroit, and Washington.

This Viking offense can sally forth knowing one every good thing on Sunday afternoon. They’ve got a 100% healthy running back named Dalvin Cook who will play this game’s wild card.

If they can create space, they can put a great defense off-balance and get number 33 into the open field, where he has shown the remarkable power and agility he displayed in 2017.

They’ve also got their own defense, a pretty tough bunch that will have their back through the entire contest.