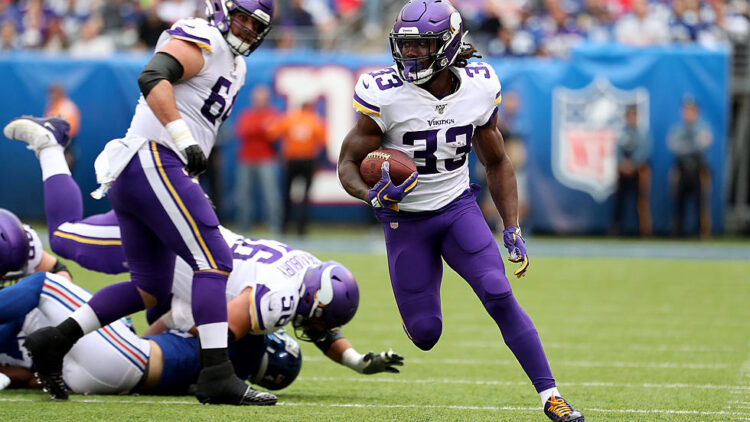 For a guy who came out of Florida State with a draft report that said he was a bit of a liability in the passing game, Dalvin Cook must have done his homework on catching screens. In 2019, he’s been deadly.

A running back with 542 rushing yards and an impossible 5.9 per carry average in five games should get a break for the most part from a team’s passing game.

Instead, Cook leads the Vikings with 21 catches on the year for 200 yards, the majority of that yardage coming upon his uber-effective use on Viking screen plays.

In this initial play-action screen from the first quarter of last Sunday’s Giant’s game, you see Cook feign a simple handoff, wait for his center and two guards to slide left and eat up the New York LB and corner, then hands catch the ball and shoot the gap for a huge gain.

It works because New York’s front moves on him to start, sees the fake and attacks Cousins, leaving him clean behind his wall of blockers after the catch.

The second screen is mismanaged by the Vikings’ rookie center Garrett Bradbury, but Cook receives a quick ball from Cousins and tears away from the New York LB that has a crack at him. He sets up the corner with a move fake back into the field and dances further to the sideline for a first down and another big gain.

Lastly, Kirk Cousins expertly uses the direction of his head to move the New York defense left, delivers a clean screen to Cook right, and watches as number 33 uses both his blockers and his speed to get past the Giants’ defensive line and into their second level.

It’s far from perfect execution, but with Bradbury’s first diving block in front of him, Cook is on his own to turbo past both blockers and defenders alike. If the Giants’s LB doesn’t catch Cook with a diving tackle below the knees at the sideline, no doubt he would split-leg the run back into the field and follow Adam Thielen‘s downfield block for a touchdown.

The Difference In Dalvin

Indeed, every NFL team run the screen game. No one as effectively as Tom Brady and the New England Patriots. For that team, the diversity of their athletes show the strength of offensive coordinator’s Josh McDaniels play design. If you don’t know what side it’s coming from or who’s going to run it, it’s more difficult to anticipate and stop.

The variable that gives the Vikings such a dangerous advantage over even the Patriots screen game is Dalvin Cook himself. In full health, the third-year tailback is a talent this team has not seen since Percy Harvin left in 2013. No one ran like Adrian Peterson, of course, but as an offensive double threat, Cook has taken his game to another level in 2019.

Cook, of all of the bunch however, is the best runner between the tackles. There is an intrinsic skill number 33 possesses that his counterparts share, but do not equal. In no small way, it can create the direction of a defense on a strong play-fake, and then set up them up to have to deal with the play’s misdirection, and a quickly set-up screen.

A screen that features Cook himself, no longer a star in the making.