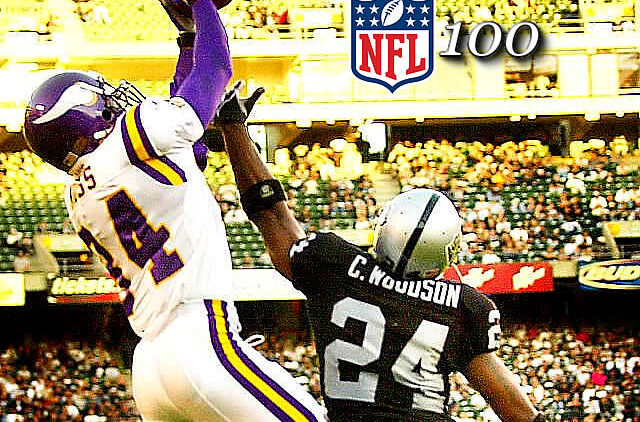 From NFL history, you have one receiver to put on your football team. You pick Randy Moss. So does everybody else.

Former Minnesota Viking Randy Moss was the tallest, fastest, and most dangerous wide receiver in the history of the game.

If Moss didn’t have the best hands in the game, please tell me who did. Also tell me who could run 25 miles an hour, keep those hands low and then hop them up for a fingers catch over track champions and career-long double-teams.

I did not say Moss was the ‘greatest’. Greatness is an overused word for a higher argument. For example, I consider Walter Payton to be the greatest football player I’ve ever seen, but not the best running back.

Ask them–in a hypothetical retrospect–who they would choose if they had one choice of ONE wide receiver to put on their team, Jerry Rice or Randy Moss. They can’t have both.

Let them judge by ten years of performance, rookie season to age 30, but put both men at their prime athletic age of, say, 22-25.

All team variables are constant. This means the quarterback is someone like Rich Gannon or Daunte Culpepper. Neither receiver has ever played with either quarterback, and the season starts in a few months. The ‘team’ has a good running game, good defense, good special teams, or if you’d like, is poor in all three regards.

I truly believe that each one of those coaches hardly hesitates (except Mr. Walsh, who is slightly reluctant) before answering:

On Passion And Paper

It is certainly true that Jerry Rice owns every record worth keeping in the big wide-receiver book. Most receiving yards, most receiving touchdowns, receptions, etc. It’s also likely they don’t get touched in our lifetime and beyond. Rice’s twenty years in the league are extraordinary, his work ethic is legendary, and his place on NFL’s Mount Rushmore is carved in stone.

To most of the world, RICE is the GOAT.

However, that didn’t stop Randy Moss, at the end of his last season in the NFL in 2013, from immodestly confessing that he thought he was the best to ever to play the game at the wide receiver position.

Instantly, Moss had reaffirmed his status as a villain to fans and press alike.

Jerry Rice himself even offered an opinion on Moss’ statement later that year:

“I still say this today — I think Randy Moss was the most talented (wide receiver). I was not the most talented, but I was going to outwork you. He’s (Moss) 6-5, could run a 4.3. Could outjump you. Struck fear in the heart of the defense. But you have to have it here, in your heart.”

These comments were one, pretty convincing testimony that Moss truly was the best, and two, perplexing in Rice’s sentimental conclusion.

Was Jerry actually telling us that Randy Moss, who played for 14 seasons, had 982 receptions for 15,292 yards and was second only to Rice himself with 156 touchdowns, didn’t have heart?

As Coach Mike Ditka would say, “who you crappin’?”

To the point of things, Rice continued:

“I know he (Moss) says you can’t bring the stats into the scenario, but I think that’s part of being the best receiver to play the game. Also, you put my numbers up against Randy’s , and my body of work compared to his, and there’s a big difference.”

So let’s compare that body of work, for clarity, and perhaps to the peril of my argument.

Debating the best players of NFL history through statistics can be an icy path. Does anyone consider Emmitt Smith the best running back to ever play the game? Of course not, though he clearly wears the belt on paper.