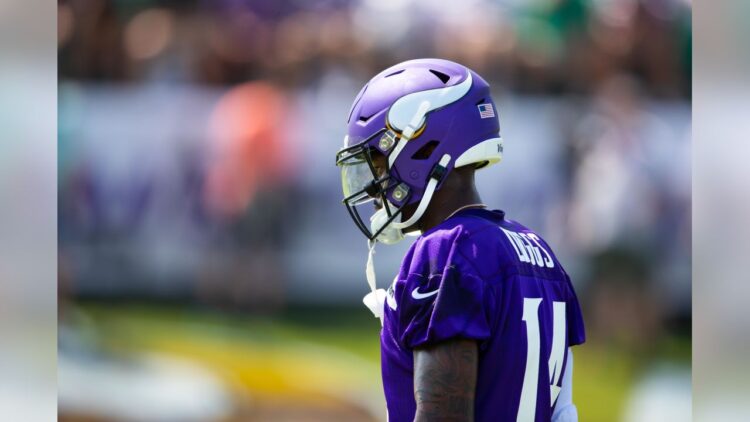 After Stefon Diggs and Adam Thielen, there is a mix of unproven talent and professional disappointments in the Minnesota Vikings’ 2019 wide receiver room.

Since 2016, Stefon Diggs has missed nine games due to injury.

Diggs is a tough guy.  He has played hurt in crucial games and made plays on the football field when he probably should have been tending to infirmities.  But at 6’ 0”, 190 lbs–and blessed with a mouth that runs with him–the dude takes a licking.

So, it’s almost a matter of mathematics that we understand that, every now and then, Diggs is going to get hurt, miss a game or two, or at best, play dinged up.  Right? As a matter of fact, he was recently reported to be suffering from a hamstring strain which made him miss practice time, and after three games, he has five catches on the season. Last season, Diggs had nine catches for 128 yards and two touchdowns in the week two game in Green Bay alone.

Things like this mean that having a WR three is essential to the Vikings success in 2019, while a four is necessary just to complete certain formations.

Adam Thielen lines up opposite Diggs.  In 2017, Thielen was selected to be a Second-Team All-Pro.  In 2018, he was absolutely skipping to another All-Pro selection after eight consecutive 100-yard receiving games to begin the season.  But then, finally, defensive coordinators’ playing the Vikings’ got the memo.

Facing more corner press and extra safety defense, Thielen then averaged only 56 yards receiving in the final eight games of the season.  He was also held under 40 yards receiving in four of those games. This, along with Diggs’ troubling variable with full health, made the Vikings a somewhat delicate proposition for 2019 in the passing department.

So what do the Vikings have to show for all the off-season anxiety, college draft, training camp, etc.?

A recently waived Laquon Treadwell returning because a recently signed Josh Doctson began his Viking career on IR. A woefully undependable Chad Beebe headed back to trainer’s room, and a rookie named Bisi no one has heard from this year at all.

Just as we begin week four by traveling to Chicago in what is the Vikings’ most important game to date.

What would happen if Adam Thielen suffered a slight tear in his hamstring? Or Diggs missed a few games coming up?. It’s a concrete possibility–and if it becomes a reality, it will pose a very big problem for the Vikings in 2019.

Minnesota’s third option last year were the lead feet of Kyle Rudolph, the stone hands of Treadwell, and a flash in the pan named Aldrick Robinson. In 2019, Robinson is gone, Rudolph returns in what he (but few others), consider “prime” condition, and Minnesota now presents a rookie tight end to augment their Pro Bowl starters.

Laquon Treadwell’s presence may comfort a few, but they are the receiver’s agent, social media rep, and lawyer.

In Chad Beebe’s senior season at Northern Illinois, he was redshirted in his senior year for an offseason injury.  As a rookie, the Vikings’ activated him from the practice squad, watched Beebe play quietly in three games–and then promptly tear his hamstring in practice.

In 2019, Beebe has two catches, seven punt returns, three fumbles and a torn ligament in his ankle, sending him to IR after three games.

If Beebe ever starts, contributes at a high level and survives a season’s pummeling from NFL safeties and linebackers, I’ll wear a number 12 jersey all Winter–and Summer–long.

Beebe’s training camp competition in 2019 was Jordan Taylor, a tall, lanky receiver with fairly slow feet and long hair.  He had good hands and some craft, but recently had surgery on both of his hips. Are you kidding me? Both hips? A wideout?

He lasted until the Saturday before final cuts.

So there you have it.  This team is one solid injury away from fielding one Pro Bowler and a flank of one or two guys that may be out of this league in another season.

It will take more than a little luck for this lack of foresight to not bite them in the rear end.