Redskin In The Game: Cousins Welcomes Doctson To Minnesota 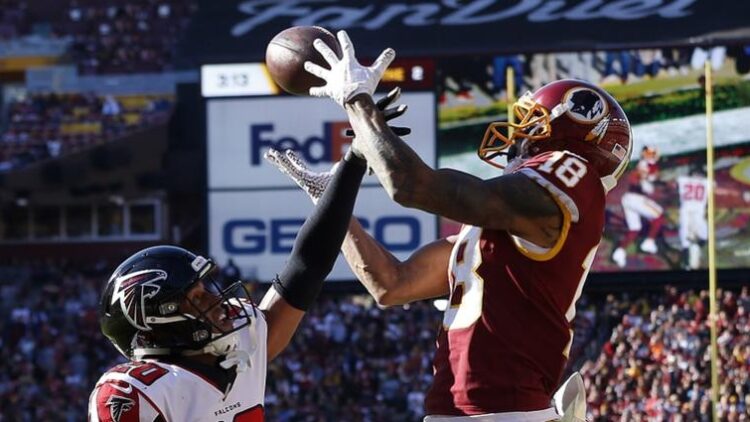 With every seemingly ham-handed move the Vikings have made of late regarding their quarterbacks and placekickers, they may have just pulled off something that replaces some anxiety with true excitement among fans.

Let’s recap: in three seasons, Treadwell gave the Vikings 56 catches 517 yards and one touchdown.  Losing him at this point is like losing that bathing suit that didn’t fit but you always kept in a lower dresser drawer.

However, in 2018 alone, the newly acquired Josh Doctson gave the Redskins 44 catches, 532 yards and two touchdowns in 15 games played.

But here’s the thing, folks.  In 2018, Washington’s head coach Jay Gruden put together plans for an offense that was commanded for that season by good old King-Of-The-Paper-Cuts Alex Smith, a quarterback not exactly an ideal fit to Doctson’s vertical game.

After Smith’s season ending injury in week ten, that offense was lead by a trio of thirty-two-year-old quarterbacks by the names of Josh Johnson, Colt McCoy, and Mark Sanchez.

It may have worked out that in 2019, Jay Gruden has seen great promise from his rookie crop of receivers and found Doctson expendable, but at this point, it doesn’t matter.

This guy is a real piece of luck–and immediately applicable talent–for the Vikings.

His familiarity with Kirk Cousins for not one, but two seasons.

In 2015, Doctson was put on IR for his rookie season after an Achilles tendon tear.  Though he did not play, he certainly watched and communicated with Cousins along the way of his rehab.

That year, the Washington QB delivered the ball to a circle of Redskin receivers including backs, tight ends and wideouts.

Aren’t those the absolutely ideal numbers the Vikings’ brass dreamed of for Laquon Treadwell?  If Treadwell caught six touchdowns last year, is it foolish to think that his team would have won 2-3 more games than they did?

No, and far from it.

Tale Of The Tape?

Just take a look at these draft profiles for the two from WalterFootball.com.

Are they the same guy?

In three seasons, Treadwell has one touchdown, in only two seasons of playing, Doctson has eight.

In one season with Kirk Cousins as his quarterback, Treadwell has one touchdown, Doctson has six.

The Vikings jumped on Doctson, while Treadwell went unclaimed through the waiver process.

One might speculate that Doctson, who had impressed Redskin coaches and OTAs and training camp, had begun to lose confidence with his team and his own future in Washington.

In five seasons, head coach Jay Gruden is 37 – 42 – 1.  In the last three seasons, Doctson has watch Cousins leave and be replaced by NFL retreads Alex Smith and Case Keenum.

A reasonable prognostication for the Redskins in 2019 is winning seven to nine games, a cake baked by Gruden in nearly each of five seasons as head coach.

Is it possible that Doctson knew the Vikings, and perhaps Kirk Cousins, were interested in signing him once he was cut?

All we do know is that two former Redskins are now dressed in purple and will try and re-establish a relationship that looked so promising two seasons ago.

For the Vikings and their new wide receiving corps, that’s very good news.

Editor’s Note: This article comes from ‘The V61’ (vikings61.com), a friend and partner of Vikings Territory!  Check out them out daily for news, analysis, and history of the Vikings!