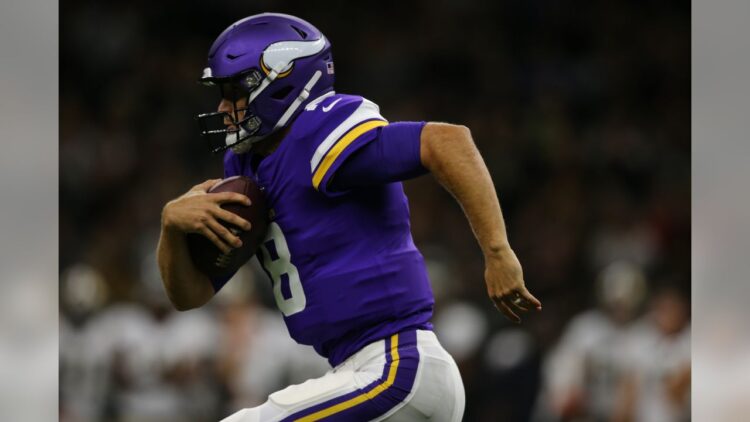 Early on in training camp, Vikings head coach Mike Zimmer said that quarterbacks coach Klint Kubiak was working with Kirk Cousins on “instinctively creating space” within the pocket. Zimmer noted that when opposing defenses double-team receivers Adam Thielen and Stefon Diggs, no one is left to “cover” the quarterback. So, in order to counterattack the blanket coverage being applied to the duo, something had to be done.

For those of you who follow my Twitter feed, “Kirk the Scrambler” has been a common theme since the beginning of training camp. It honestly started off as sarcasm, but then it kept happening more and more. You couldn’t ignore the trend. Cousins was running, a lot. And not just on designed run plays…

For example, on this play in team red zone drills, his reaction to the pressure being applied by Everson Griffen appears to be rather instinctual. He looks to the middle of the field during his drop back. As he sets his feet at the top of his drop-back, he takes a quick glance to his left. He sees Griffen closing and without hesitation turns and takes off to the open field.

This next play is from the night practice. It’s similar to the scramble we saw from him during the first preseason game. After a 3-step drop, Cousins steps up into the pocket and takes off into the open space in front of him.

Here’s the play I was referring to from the game on Friday. In a passing situation on third-and-nine, New Orleans brings a blitz up the middle. Cousins side-steps the pressure, steps up into the pocket and takes off for the first down.

Kirk has wheels, like he kept promising us pic.twitter.com/pnUSdRoCgD

Not only have the quarterbacks been running pocket presence drills in practice every day, there are more built-in QB runs in the Vikings’ new offense. Here’s a quarterback draw from the 2 yard-line in team red zone drills.

In theory, the more Cousins is required to use his legs (on sneaks and bootlegs) in practice, the more comfortable he should feel utilizing them during games. This play is a designed bootleg to the right. With Danielle Hunter left unblocked, he charges at Cousins to try to run him down. Kirk sees that he has a few steps on Hunter and accelerates to the corner for a diving touchdown.

Here’s another designed rollout, this time to the left. Cousins is able to gain enough separation from the defensive end by using his legs. Then, without planting his feet, he’s able to deliver an accurate throw on the run (across his body) to hit wide receiver Adam Thielen for the completion.

First play… Kirk Cousins rolls out to his left – hits Adam Thielen. Good for about 7. pic.twitter.com/jnBasBLOUB

Now, as stated earlier, the fact Cousins is running more could simply be a trend. It could also be the result of a new offense that has more designed QB movement. Either way, if opposing defenses continue to double-team Thielen and Diggs, they’ll have to account for the nifty 30 year-old quarterback who appears to be adding a new number to his repertoire.