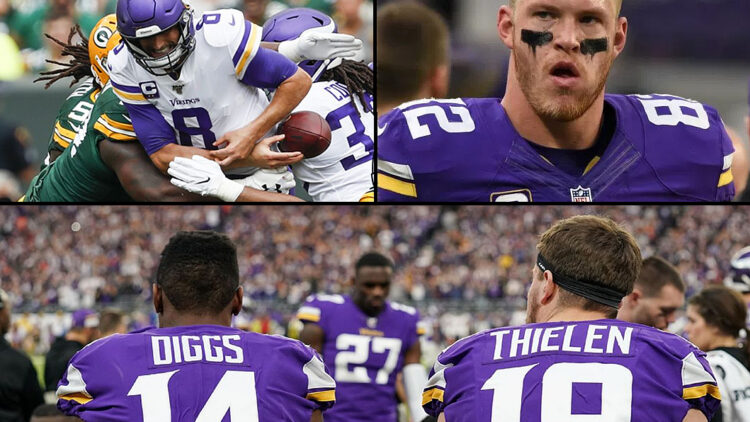 The Minnesota Vikings payroll for one quarterback, two wide receivers and one tight end is over $58M for the 2019 season.  For that money, they are ranked 31st out of 32 teams in passing yards after four games.

It’s not often that an essay on a football website addresses the owner of the team as a “player” in regard to the future of a team, but for Zygi and Mark Wilf, the state of the Vikings’ passing game has to be a big concern.

A big concern because of the big money the Wilfs’ have spent on it.

Go ahead and put aside the money that an incredibly underacheiveing Kirk Cousins is due, how about Kyle Rudolph, who for around $9M this year has five receptions for 32 yards?

As for Adam Thielen and Stefon Diggs, who in 2018 had the best years of their career, the frustration of being underutilized this season is beginning to show up in different ways.

In Thielens case, comments to the press.  Responding to reporters after the dramatic defeat his team took on Sunday in Chicago, the six-year receiver said: “I think we’re just as frustrated as every fan in the state of Minnesota, every Minnesota Vikings fan. We are more frustrated; we put everything we have into the offseason. We grind every single day, and then to put a performance like that, it’s so frustrating, it’s unbelievable.”

His teammate, Stefon Diggs has shown his chagrin to the state of the Vikings offense in a less verbose way, by refusing to speak to the media in more than a week.  In fact, Diggs exited the Minnesota locker room yesterday before the press had a chance to talk to him about the Chicago loss in which the receiver caught 7 balls for 104 yards.

Quarterback Kirk Cousins seems to repeat the same things after he has bad game performances. He’s a humble person who wants to do better, but quite honestly, he’s just getting worse as this team’s leader.

His 52.9 rating at Green Bay two weeks ago was worlds away from his 91.2 rating in Soldier Field, but the actual administration of his offense was just as bad.

Again, Cousins overthrew his receivers on long passes, at times failing to even locate them free on the field.  Cousins’ five incompletions over 15 yards have all been overthrows, and he is now 6-10 with 2 TDs on passes that have traveled 15 or more air yards in four games this year.

But Adam Thielen, though discouraged, at least understands the task before himself, this passing offense, and ultimately, the offense itself.

The Wilfs, a family from New York where the Vikings will play their next game on Sunday against the Giants, expect no less than such an effort from Thielen–as well as three highly paid players who are his teammates.

If they don’t see it soon enough, there are most likely going to be changes in their football team.