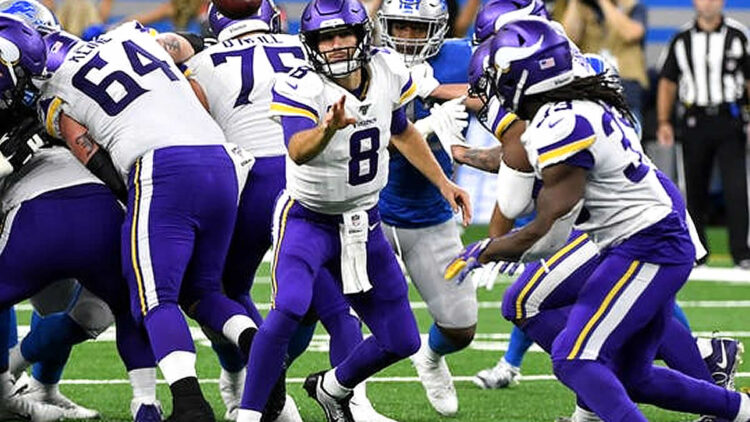 Without garbage time stats included, the Detroit Lions accumulated 26 first downs, 438 total yards and 30 points against Minnesota defense on Sunday, Fortunately for Vikings’ fans, their team’s offense performed even better in the game.

The Lions are certainly an improved offense from 2018, but the question here is whether the Vikings defense is as good as last season’s unit.

Currently, they rank sixth in total defense in the NFL; 7th in rushing yards allowed, and 15th in passing.

With the Lions losing their starting running back Kerryon Johnson in the game’s first quarter, Detroit ran the ball only 20 times for 88 yards, but passed it 45 times for 364 yards and four touchdowns.

If that’s the work of the 15th ranked passing defense, I’d hate to see the numbers on the worst.

Cornerback Xavier Rhodes continued his sketchy season, being beaten by his man consistently and giving up two of Marvin Jones’ four touchdowns.

On Jones’s last score over Rhodes, the cornerback threw his helmet to the turf in frustration. He then stood on the ensuing two-point conversion try by Detroit and watched fellow cornerback Mike Hughes successfully defend a pass to Lions’ WR Kenny Golladay.

The writing on the wall may be getting more legible to number 29. Clearly, ‘Rhodes Were Open’ in Ford Field on Sunday.

Fortunately, for this unusually out-of-step bunch, they had a group of teammates with their backs covered in Detroit

Quarterback Kirk Cousins completed 70% of his passes, threw for 4 touchdowns himself (without an interception), and got numerous Viking players involved in scores after starting wide receiver Adam Thielen departed the game in the first quarter with a hamstring injury.

The injury came on Thielen’s 25-yard touchdown catch to make the game 7-7.

Vikings’ running back Dalvin Cook once again extended the Minnesota playbook with remarkable runs through the Lions’ front seven–or eight or nine at times–and finished the game with 142 rushing yards, his fifth 100-yard game on the season.

Rookie tight end Irv Smith Jr. caught five passes for 60 yards, and Stefon Diggs again stole the show with seven catches for 142, including a game-clinching 66-yard catch-and-run down to the Detroit goal line with under three minutes remaining in the contest.

After the 42-30 victory, Vikings’ head coach Mike Zimmer decided to give one game football to quarterback Cousins–and another to his entire offensive unit.

A solid credit to good work and team football in a tough game where a challenged Minnesota defense needed an assist from their guys on the other side of the ball.

The Vikings now have a short work week and meet the 1-6 Washington Redskins at US Bank Stadium on Thursday night. A win there makes Minnesota 6-2 at the season’s halfway point before traveling to Kansas City to play the Chiefs.