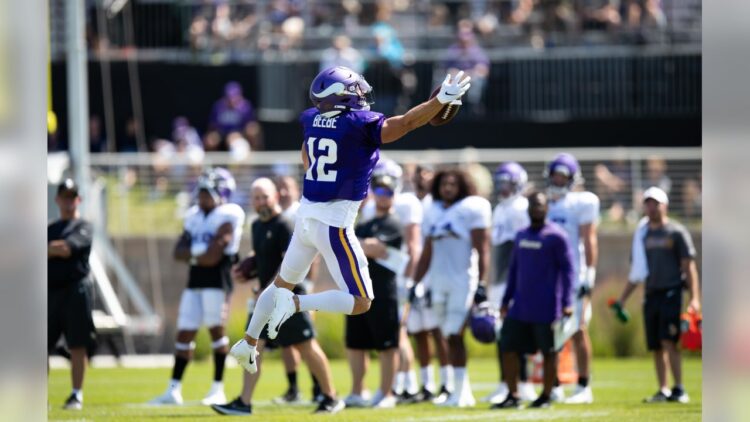 With no clear-cut favorite to grab wide receiver spots behind Adam Thielen and Stefon Diggs, Minnesota may see what’s out there after final NFL roster cuts on August 31st.

Ladies and gentlemen, the contenders (and their preseason stats) for the Minnesota Vikings’ wide receiver spots three and four positions are:

Forgive us for not including Jeff Badet and Dillon Mitchell, but even those guys know that their best chances of an NFL job lies on a practice squad here or somewhere else.

So, despite the OTA, minicamp, and training camp hype of Chad Beebe and Jordan Taylor, the pair has given fans as much hope to be an offensive threat on the game field as TE David Morgan.

Zylstra has qualities. He has a big body. He also has good hands. But it doesn’t take a detective to decipher that he’s got below-average foot speed. That means he does not separate from defenders when he singled out in coverage, kind of a necessity in this league.

Oblasi Johnson, the Vikings’ seventh-round pick from Colorado State and a fairly solid front runner here, has more than one thing going for him.

One: he’s made plays in the preseason.  As Stefon Diggs taught us in 2015, great value at the wide receiver position can be found in the late rounds of the NFL draft.  Players just have to show the coaches they can make plays when given the chance. Johnson has done that.

Two: he’s young and healthy. Health is a factor with this competition, as Beebe, Taylor and Zylstra have hardly proven durable in their brief NFL careers.

Three: Johnson has good quickness and savvy, already showing he can not only be corners with his routes but also run with the ball after the catch. He’s not big at 5’ 11” 195 lbs., but has shown that he works hard at practice, something head coach Mike Zimmer has noted.

This assessment, I’m afraid, leaves the Vikings in want.

Chad Beeb and Jordan Taylor have been involved in a preseason disappearing act that Harry Houdin would appreciate.

Laquon Treadwell might as well change his jersey nameplate to “Re-Tread” at this point.  Unfortunate, yes, but it is what it is.

If the Vikings put him on the field on Thursday night, it remains a potential enticement for trade.  However, it’s becoming clear that nobody wants to trade for Treadwell.

If NFL scouts and executives have seen anything, it’s star college wideouts that can’t compete at the pro level.

The Grass Is Always Greener

That leaves Minnesota with one last credible option. Find a wide receiver cut by another franchise they would help this offense in 2019.

How about examining the wide receiver rosters of either the New Orleans Saints or the Carolina Panthers? Both have 11 receivers on their current roster with perhaps 8-10 positions to fill.

Veterans like Jarius Wright, Torrey Smith and Alrick Robinson may get the axe, while young athletes like Austin Carr, Keith Kirkwood and Emmanuel Butler may only make practice squads, available to sign away to active rosters.

It’s regrettable to see that the 2019 Vikings may be lacking in credible and dependable pro wideouts that can contribute on Sunday.  Sure, you need special teams’ players, but we’re talking turkey here, as in catching the football.

Perhaps Drew Petzing, the Vikings’ wide receiver coach, feels good enough to move forward with a pair to make his primary group, but it can’t be a conviction reassured by his players’ performances in the preseason.

If the Vikings fill their active roster with only the group they have, it should be after a long look at who may become available on September 1st.

Editor’s Note: This article came to Vikings Territory from our friend and partner, ‘The V61’ (vikings61.com).  Check them out for Viking news, analysis and history!