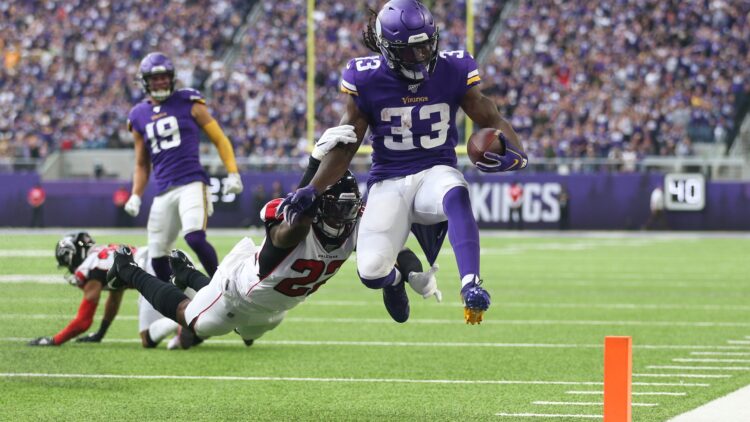 The Vikings were not good at running the ball last year.  They ranked nearly last in the league in both expected points added and success rate on runs in 2018:

Not coincidentally, John DeFilippo’s offense last year was the second-most pass-heavy team in the NFL.

Yet one week into the 2019 season, the Vikings are by far the most run-heavy team in the NFL, and have improved from arguably the worst rushing offense in the NFL to one of the better ones:

What changed?  How are Kevin Stefanski and Gary Kubiak turning things around?  Taking a look at the Vikings’ most effective plays, how Kubiak drew them up in his old playbooks, and what new wrinkles Stefanski is adding may start to give an answer.

Gary Kubiak built his reputation and won three Super Bowl rings as offensive coordinator and head coach off one foundational play — outside zone.  That core play is a big reason why the Vikings hired Kubiak and Rick Dennison.  Here it is in action:

Here is how Mike Shanahan and Gary Kubiak drew the play up in the 2004 Denver Broncos’ offensive playbook: 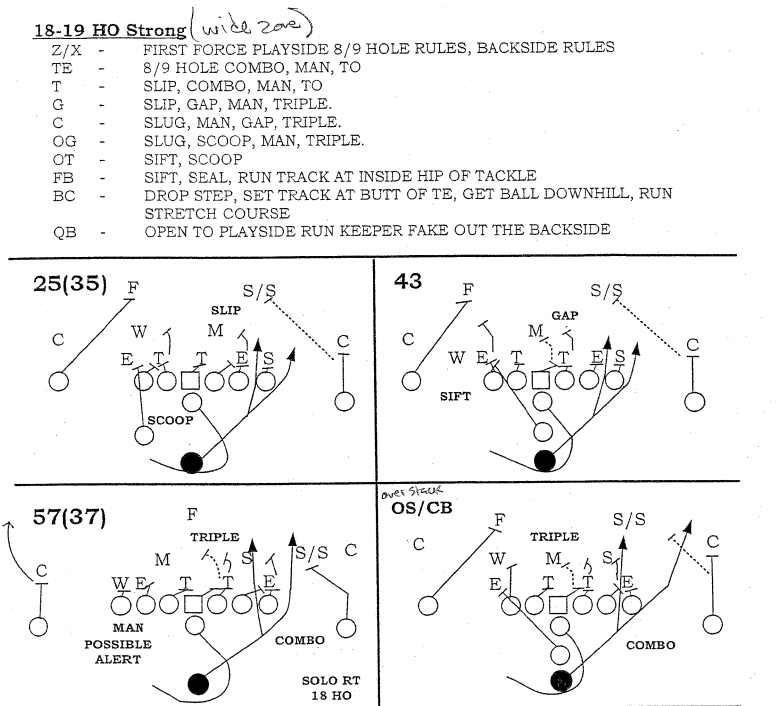 Zone blocking starts with the synchronized footwork of the offensive line, and the first step on an outside zone play is called a “bucket step” — stepping six inches backwards playside to explode laterally as fast as possible.  Blockers who are “covered,” or who have a defender in front of them, block that playside defender, ideally walling them off or at least occupying their defender.  Blockers who are “uncovered” help double-team a defensive linemen, and once that lineman is under control, climb to the second level to wall off a linebacker.

As Kubiak’s playbook states, the ball carrier’s job is to aim at the butt of the tight end, stretch the field, and either “bounce” the play around the edge, “bang” inside one of the playside blockers if the edge is covered, or “bend” back towards the backside if no playside lanes have been opened.

In the play above, Kyle Rudolph and Brian O’Neill occupy their defenders who are aligned too wide to reach (turning the play into more of a mid-zone run).  Cook “bangs” the run inside Brian O’Neill through the lane opened by Josh Kline’s reach block.  Garrett Bradbury has perhaps the most impressive block as he is able to control the nose tackle along with Elflein’s backside cut block then climb and take the linebacker out of the play as well.  And the downfield blocking from Irv Smith Jr. and Brandon Dillon sets Cook up for a 22-yard gain, his longest of the day.

But while Kubiak may have laid the groundwork of this offense, Stefanski is adding his own wrinkles, as shown in this next play below: 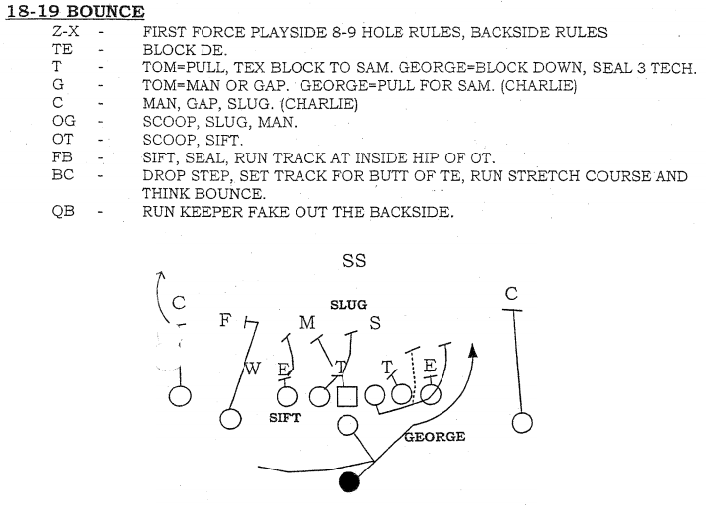 The key block here is the playside tackle (here, Brian O’Neill) blocking down on the three-technique (here, Grady Jarrett).  The Vikings were clearly game planning for Jarrett, and this call takes the Falcons’ star defensive tackle out of the play with a surprise down block, which sets up Josh Kline, along with Kyle Rudolph and C.J. Ham, to clear out space past the edge.

From there, Cook flashes tremendous explosion to the edge, instantly sees the cutback lane past Kyle Rudolph, then finishes the run with a pile-driving hit to Deion Jones.

Stefanski runs this play out of 22 personnel (two tight ends, a running back and a full back) with both tight ends in the box, which condenses the formation and gives Cook more room to stretch, and it also forces Atlanta into heavier personnel less likely to catch Cook bouncing to the edge.

Gary Kubiak is most famous for his outside-zone rushing scheme, but the Vikings’ biggest rush of the day (EPA of 4.0) came not on a zone-running concept but on the classic man-blocking play — the power run:

The play is a staple of NFL offenses through history: here is a similar play from Mike Shanahan and Gary Kubiak’s 2002 playbook: 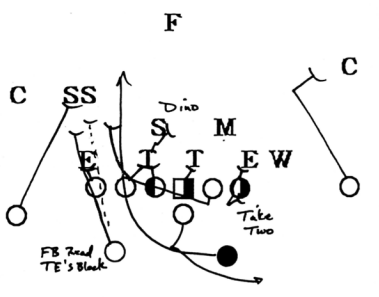 The distinctive block in a power run is the backside guard’s pull: in this play, it’s Josh Kline pulling and running behind the offensive line to block the playside edge and climb to Deion Jones.  Kline’s pull is assisted by Bradbury pancaking the nose guard in his down block.  Cook does an outstanding job here pressing the hole, which sucks the linebackers up into their gaps, then exploding to the edge with such burst that he’s almost untouched to the endzone.

But two things turn this play from a decent success to a touchdown: first, Damontae Kazee (#27) misreads things and takes himself out of the play, and second, Thielen ferociously pancakes his defender downfield, aided in part through the pre-snap fly motion which gives him a running start and gets the defender off-balance.

The play features normal outside zone blocking, except the Y tight end (here Kyle Rudolph) crashes down on the end.  With the down block taking out the end, both the playside tackle and guard pull to the edge.

And then on top of all that beef you have C.J. Ham blocking playside to the edge as well.  Stefanski’s call gives the Vikings the numbers advantage and gap confusion of a power run but with the lateral explosion of outside zone.

The execution on the play is excellent as well.  Mattison cuts upfield past the edge for just a split second, which freezes the defenders for just a split second to give the Vikings’ blockers (especially C.J. Ham) good leverage.  Every playside blocker wins his block, but Pat Elflein’s pull in particular stands out for knocking Keanu Neal in the dirt and springing Mattison free for a 17-yard run to the one-yard-line.

The Vikings ran that same play again earlier in the game, this time for a 23-yard gain:

The pre-snap motion and toss sweep design remain the same, but here the play is run to the opposite side of the field, so here it is Brian O’Neill and Josh Kline pulling after Rudolph down blocks the end.  Bradbury gets an excellent reach block on the 2i nose guard, C.J. Ham knocks two defenders out of the play, and Mattison gets even more yardage by hurdling Ricardo Allen and driving his shoulder into De’Vondre Campbell at the end of the play.

Cook scored his second touchdown on a split zone run, featuring normal zone blocking with the “split” coming from the tight end blocking across the formation:

Here the Vikings’ offensive linemen block similar to a normal inside zone running play.  The Falcons here make a crucial miscommunication — both Tak McKinley and Kemal Ishmael drop into coverage, leaving no end for Irv Smith Jr. to block coming across the formation.  Smith Jr. and Cook seize on the opening and, along with Riley Reiff, bulldoze their way into the end zone.

What turned the Vikings’ rushing offense around compared to last year?

The emphasis on outside zone running is perhaps the biggest difference.  Last year the Vikings’ rushing attack lacked a core identity — DeFilippo tried a million different running schemes to see if any could work, but wound up turning the Vikings into jacks of all trades, masters of none.  Stefanski and Kubiak instead are focusing on one core concept that plays to the players’ strengths: the athleticism of the offensive linemen and the explosiveness and vision of Dalvin Cook.

Moreover, that focus has helped the Vikings with their execution.  Rather than dabbling in a million different schemes, the offensive line have been drilling outside zone, and the emphasis shows up in the blocking.

Finally, Stefanski’s own schemetic flavoring is boosting the rushing attack.  The Vikings found big gains by game planning around Grady Jarrett, using heavy personnel and tight splits to let Cook’s burst stand out, and made ample use of pulling linemen to get defenders out of gaps and spring backs loose for huge gains.

While it has only been one game, and future defenses will undoubtedly respond to how well the Vikings ran to the edges, Kevin Stefanski and Gary Kubiak are already delivering big time returns for the Vikings’ rushing attack.