Oh My Guard! Vikings Have Needs Other Than Quarterback 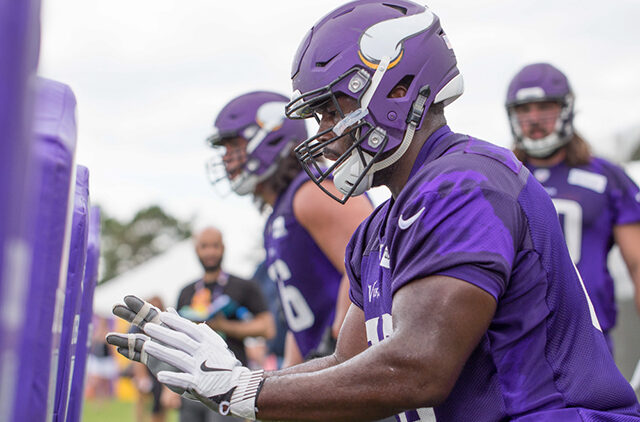 Lost in the swirling speculation and rumors surrounding the Minnesota Vikings‘ quarterback situation are the other positions on the roster that need to be filled.

Offensive guard is one of them.

It was assumed Joe Berger would retire following the season. Instead, the veteran announced he will return for a 14th season. It’s unclear whether or not the Vikings have interest in re-signing the 35 year-old. If so, he would be the presumed starter at his old position, right guard. At this point, however, it appears the Vikings seem content with allowing Berger to test free agency on March 14th.

Jeremiah Sirles will reportedly become an unrestricted free agent. His agent recently told local media the Vikings will not offer the lineman an RFA tender. Although Minnesota plans to offer Sirles a contract in free agency, they made need to out-bid other teams for his services. Sirles will likely receive a fair amount of interest on the open market considering his versatility (he can play tackle or guard), relative youth (26), and prototypical size (6-foot-6, 315 pounds).

Nick Easton, the starting left guard in 2017, is also a restricted free agent. Easton, who is coming off a season-ending ankle fracture, could receive a low-round tender of $1.9 million from the Vikings, but it would be in the team’s best interest to extend Easton and avoid the inflated cap number. Easton made $615,000 in 2017.

Guard/center Josh Andrews was signed shortly after the season, but Danny Isidora is the only true guard the Vikings have under contract in 2018.

Regardless of Berger’s potential return, the team will need to find a replacement in addition to depth. Free agency has a couple intriguing players, but not many upper echelon options. The draft, however, is considered deep with interior offensive linemen. Here are some of the top options that will be available to the Vikings this offseason.

Vikings Territory will take an in-depth look at these prospects in the days leading up to the 2018 NFL Draft.

Defensive tackle is another position the Vikings need to address. We’ll take a look at team’s DT situation, as well as available options in free agency and the draft later this week.