For Now, It Has to Suck 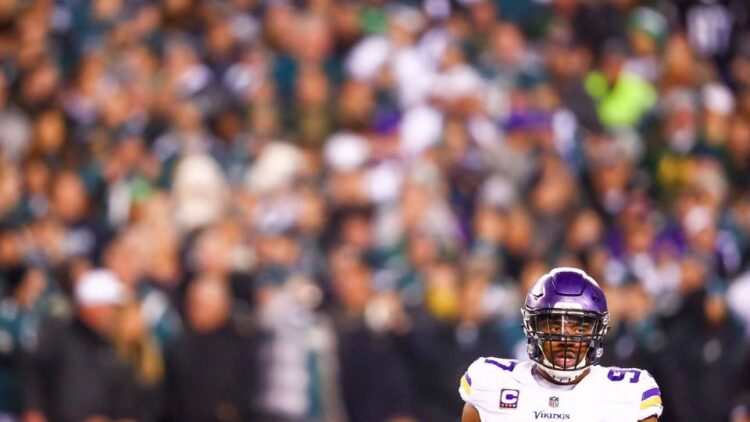 There’s a certain amount of wallowing that needs to happen after this sort of loss before we can move on to anything remotely constructive. So, if you don’t mind, I’ll start with that.

The Vikings’ 38-7 loss to the Eagles in the NFC Championship Game was soul-crushing. It was a dominant, poised performance from the home team, and an equally scattered and underwhelming showing from the visitors who, after weeks — and months — of building momentum, good will, and talks of destiny, seemed not to even belong on the same field as their opponents. It was all the magic from the Miracle in Minneapolis dissolving before us in the span of two quarters, seemingly as quickly and unexpectedly as it had arrived. It was a good, old-fashioned you-know-what kicking, and it fits neatly — painfully — next to the Vikings’ prominent letdowns of years’ past.

It would be one thing if they’d lost in a reasonable matter. If the run game wasn’t able to get going, and so the game became a defensive, slug-it-out punt-fest, with the Eagles making a few more offensive plays in the end and winning, say, 17-13. Or, if after playing a characteristically ballsy game, Case Keenum made one glaring mistake in Vikings territory, turning the ball over and allowing Philly to ice the game. Or heck, if Kai Forbath just missed a field goal.

Any of these scenarios would have been understandable —  borderline acceptable — for Vikings fans. We all had concerns coming into the game, and if those concerns were realized, so be it. But this? Mike Zimmer’s league-leading defense being eviscerated by Nick Foles, putting the game out of reach by the midway point of the third quarter? That same defense, so historically good on third down, giving up 10 of 14 third down conversions? A complete inability for Zimmer to scheme up an answer for the Eagles’ signature run-pass option?

No. No. This did not make sense. We’d get it if the offense, alone, struggled — we were prepared for that. But couple it with an all-out defensive meltdown against a backup quarterback, and it’s as just baffling as 41-donut or Anderson wide left. Like those other moments in Vikings NFC Championship lore, it hurts more because it shouldn’t have happened — not that way, anyway. We were prepared for the possibility of losing, but we sure as hell weren’t prepared to lose like that.

We’ll always have the Miracle, sure — I’m not among the folks who thought the only way to ensure Keenum to Diggs goes down in history is to go on and win it all — but those memories are for a later time. For now, we lick our wounds and recede from the football-watching masses for a while. You may or may not have the stomach to watch a Patriots/Eagles Super Bowl; I’m not yet sure if I do. But regardless, it’s not going to be the same breezy, fun spectacle it is when your team has been out of it for months. When they get this close and fall short, even thinking about watching two non-Vikings teams square off for all the marbles turns your stomach a little bit. It just all seems sort of wrong.

This one, like the rest of them, will take a while to get over. It’s a good thing we have practice.

And when we do — when we do finish with the requisite self-pity and spiritual probing and “do I really need to do this to myself every year?” introspection — we’ll move on to the next conversation. We’ll look to next year, and try to decipher the quarterback situation, and get excited about Dalvin Cook’s return, and attempt to figure out how to get more consistent pressure on opposing quarterbacks. There will be a draft and free agency and a training camp, and there will be hope anew, like there always is.

For now, all that matters is the Eagles are going to the Super Bowl, and the Vikings are going home. For now, the Eagles win. And that’s what hurts; the nagging remembrance that they are getting ready to play the biggest game of their lives, and it should have been us.

It’s going to hurt for a while, and that’s just the way it has to be. You remember this place, don’t you? Because at some point, every season, we always seem to get here.

There will be hope again. There will be positivity again. But for now, there isn’t. For now, it just has to suck.