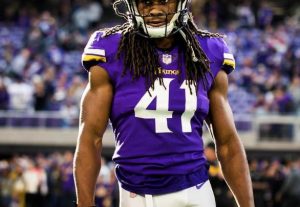 The Vikings were flexed into Sunday Night football at Soldier Field against the Chicago Bears, and then the Bears defense flexed its muscles and came away with a convincing 25-20. Turnovers and ineffectiveness on offense and not enough on defense spelled doom for the Purple going against a very strong and well-balanced Bears team.

The Vikings offensive line was no match for Bears defensive front (Minnesota rushed for 22 total yards in the game). And the defense let Bears  quarterback run wild in the first half on their way to a 14-0 lead the Vikings could not recover from.

The loss keeps the Vikings in second place in the NFC North division, 1.5 games behind the Bears, whose schedule is going to make them tough to unseat the rest of the way. The Vikings have the Green Bay Packers coming to town next Sunday and it doesn’t let up much after that. They need to regroup quickly and get back on track or may find themselves on the outside of the playoffs looking in this season.

Kirk Cousins went to the town of his birth, but it wasn’t likely the visit he was hoping for. He probably had a lot of friends and family in the stadium, and it wasn’t long before he was hoping they got stuck in traffic. In the first half, Cousins was 7-13 for 57 yards and a pick (for a 33.2 quarterback rating), and those incompletions included several bad passes. He was getting harassed by the Bears defensive front for most of the half and appeared to throw to spots in attempt to get the ball out before they converged, but he had some bad misses.

In the second half things didn’t improve much. The defense gave Cousins some opportunity to get his team back in the game, but his pick-six on a pass Laquon Treadwell pretty much sealed the game. Cousins led the offense on touchdown drives, (throwing touchdown passes to Aldrick Robinson and Stephon Diggs–who had 13 catches for 126 yards) but the turnovers really hurt. His final numbers were 30 of 46 for 262 (two TDs, two picks and a 76.5 rating) but he missed too many throws or miscommunicated with this targets to every give his team the fighting chance it needed.

The Khalil Mack (and Company) Attack was the story of the game. The Vikings had no answer for the one-man wrecking crew. They chipped him, doubled him and played away from him, but nothing really worked. And when they did stop him, then Akiem Nicks made up for it by blasting though the middle of the offensive line, disrupting plays, blowing up others and sacking Cousins or blocking his passes. It was not the offensive line’s best night, not by a long shot. I would call out names, but the entire unit had trouble with Bears defense. The Bears have a great front, but if something doesn’t change along the Vikings offensive line going forward, fans can get used to seeing more of the same in the future.

The Vikings defense played on their heels most of the night. They bent but didn’t break on the first drive, but when quarterback Mitchell Trubisky started running, everything went awry. The team appeared to be too late putting a spy on Trubisky, and when he stayed in the pocket, he made some nice throws (and some bad ones—he threw two interceptions). In the second half, the defense slowed down the top-five offense, but the damage had already been done. The offense could only make a garbage time comeback to make the final respectable. Head coach Mike Zimmer seemed to know what was coming this week from Bears head coach Matt Nagy (that is, just about anything), but when it came to game time, Nagy held the early upper hand and the home team held on for a win.

Coming into the game, many of the prognosticators thought that Harrison Smith would be an X-factor in the game. And early on they were right. Conventional wisdom said the Vikings would moving him all over the field and trying to give different looks to the second-year Bears quarterback. And in the early going that was just the case as Smith made plays in the flat, the secondary and in Chicago’s backfield. On the game had eight tackles and two of them for a loss, plus a fumble recovery. (Perhaps it’s not a great thing when your free safety is making all those plays, and clearly it wasn’t tonight.) Smith did have a roughing the passer penalty late in the game (and it was marginal), but it is hard to blame him when Trubisky is such a huge running threat—but when the game is on the line, none of that matters. You need to err on the side of caution.

There was another safety playing some ball tonight, Smith’s partner Anthony Harris. He picked up his second and third interceptions of the season in place of the injured Andrew Sendejo. Unfortunately, it only resulted in three points for Minnesota. Sendejo has been out several weeks with a groin injury, and there is no rushing that kind of affliction, but if he doesn’t get back soon, Harris is going to Wally Pipp him.

Hats off as well, to Stephen Weatherly. On the game he had, three tackles and one for a loss, plus he made a lot of good reads where he stayed in his lane and blew up some misdirection plays. On a night when we didn’t hear Everson Griffen’s named called a lot, we heard Weatherly’s quite often. He has made the most of his time filling in for Griffen when he was out, and it has really paid off for himself and the defense.

Turnovers. The Vikings were moving efficiently downfield in the first quarter and looking at least to tie up the game until Dalvin Cook got hit by a Mack truck and fumbled. Killed some early momentum. Cousins had two interceptions—one of them for a pick six—and neither of them were close to his receivers. The Vikings didn’t loss the turnover battle (they tied 3 to 3), but they lost the game and TOs were instrumental. The Bears were able to overcome their turnovers.

Mystery calls. The penalty on Eric Wilson near the sideline was a head scratcher. I can’t fault Wilson for a little frustration with the first half—I get it. But there wasn’t anything there to really call. That’s not to say it was detrimental to the Vikings, but that just piles on an already bad mojo in the game.

Bad penalties. Eric Kendricks, what are you thinking with that late hit out of bounds? The defense had Tarik Cohen (who they had trouble with all game long) stopped and he wa going out of bounds, but you gift the Bears (who definitely don’t need it), another 15 yards. Inexcusable in a game when every yard counts.