Vikes at Rams Preview–Stand Up, Show Up and Compete 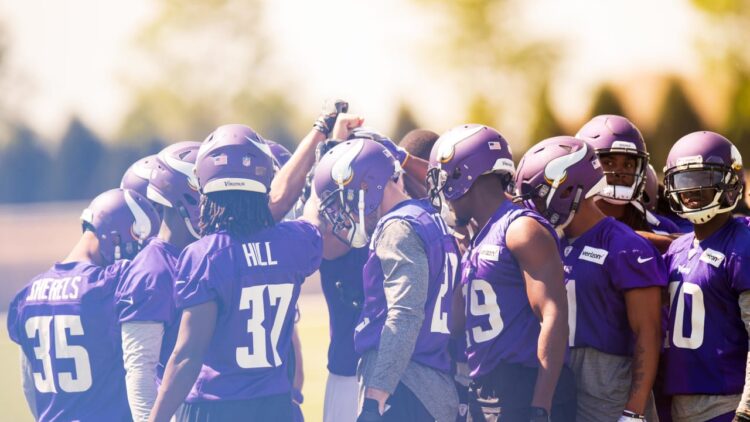 This short week from the Minnesota Mauling on Sunday at U.S. Bank Stadium at the hands of the Buffalo Bills to this Thursday feels like the longest week of the season. The Vikings suffered an embarrassing defeat at the hands of the so-called worst team in the league, and then two days later hopped on a play to Los Angeles to face the Rams, the NFL’s best team. And in-between that time they experienced the loss of one of their team leaders, defensive end Everson Griffin, as he reportedly was dismissed from practice last week and ultimately was hospitalized for a mental health examination. The adage that “Sunday can’t get here quick enough” is apt, but now Thursday may be coming too quickly.

The Griffen situation certainly must have weighed some on the minds of the Vikings last Sunday, as they played perhaps one of their most distracted and dispiriting games in recent memory (even long memory). After the game, we should have expected to see a livid head coach Mike Zimmer, but he was as shell-shocked as the fan-base and might have been distracted with more immediate concerns of Griffen’s well-being.

“The only thing we’re really concerned about for Everson isn’t really anything to do with football. It about him getting better,” Zimmer said on Tuesday. “In the five years that I’ve been here I’ve always loved Everson. The effort that he puts out, the work that he does, the chants you count on him at game time, even at practice. He’s always been a really good model for us, and obviously he’s going through some tough times now.”

But the NFL waits for no one. So the Vikings embark on resurrecting their season after two consecutive winless games and they must face head on, perhaps, the toughest opponent they will face all year. It is possible that getting out of Minneapolis is the best thing for them, in that they can concentrate fully on the X’s and O’s of the game and put aside, only for an evening, the fate of their brother-in-arms back home. Call it callous, but that is what it will take. And Zimmer said the team is handling it.

“We have been really disappointed in how we played last week,” he said. “That is the main thing. I know talking about Everson, our guys really care and love Everson. But our guys understand we all have a job to do. I haven’t noticed [the players being distracted by Griffen], we’ve only had one day. It’s hard, but they seem to be, other than disappointed about the loss, they haven’t seemed to be down or anything like that.”

Zimmer is right in the fact that the Bills game itself likely has his team in a funk. Losing in epic fashion like that will have that affect. But the Rams won’t care about any of it. They are formidable, undefeated and on a roll that they would like to continue. And there is good reason for it.

The Rams, who made the playoffs last year, have been a team on the rise with young QB Jared Goff and all-world running back Todd Gurley (currently the fourth-leading rusher in the league, and the league-leader in scoring with five touchdowns). They improved an already formidable defense with several offseason acquisition. They signed defensive tackle Ndamukong Suh to join a defensive line that features Aaron Donald, then they traded for cornerbacks Marcus Peters and Aqib Talib to bolster their pass defense. As it stands today, the Rams have the sixth ranked defense in terms of yards allowed (296.0 per game) and the first in points allowed, giving up 12 points per game. So far, it has been an unmitigated success.

The only bright spot for the Vikings offense (an offense that put up just six garbage-time points against the near-worst defense in the league last week) is that Talib and Peters were both injured last week and are unlikely to play for the quick turnaround game on Thursday. That creates an opening, but it remains to be seen whether or not the Kirk cousins-led offense will go through it.

Cousins will possibly see the return of running back Dalvin Cook in the game, and Captain Kirk could use the boost to the team’s running game. Last week the team produced six carries (two of them scrambles by Cousins) for 14 yards. If the running game falters, and Cousins has to drop back 55 times (as he did against the Bills), the Rams defense will feast on him and we’ll likely see backup Trevor Siemian running for his life before game’s end.

Defensively, the Vikings will have their hands full with Gurley, who is a threat on the ground or through the air, and with Goff, who is off to his best start as a pro. Last week in the “Battle for L.A.” against the Chargers, Goff was 29 of 36 for 354 yards, with three touchdown passes, one pick and a 123.8 passer rating. Goff doesn’t run as much as the Bills’ Josh Allen does, so that may help the Vikings defenders that had trouble containing the mobile last week. But Goff has plenty of targets to his so he doesn’t to run.

“They’ve got great receivers,” Zimmer said. “[Brandin] Cooks is a dynamic receiver, [Cooper] Kupp is really good, [Robert] Woods, he looks fast and even better than a year ago. Obviously, Gurley is a hard running back with great speed to get to the perimeter. Their offensive line does a nice job, and like I said earlier on the conference call, I thought Goff took a jump from his first year to his second year, but I think he’s taken another big jump here in his third year. He’s moving well in the pocket, he seems under control of their no-huddle offense and the things they do getting into the right plays and out of the right plays. It’ll be a great test for us.”

The Vikings are currently in the toughest part of their schedule (made tougher, apparently, by those pesky Bills last week) with the Rams on a short week and the defending Super Bowl champion Philadelphia Eagles the following week, so they need to show up and compete, which they didn’t last Sunday. These next two games are a tall order for a squad that is in clear disarray at the moment, and the fact they have to travel two time zones west doesn’t appear to help.

We’ll say it again, what the Vikings (who beat the Rams handily last season) need to do on Thursday is compete. They need to show up ready to focus on the task at hand and prove they aren’t the team that didn’t show up last Sunday. If they compete like they are capable, they can get a split of these next two games and that will help resurrect their season. Say’s here they will, but the win won’t come until next week.