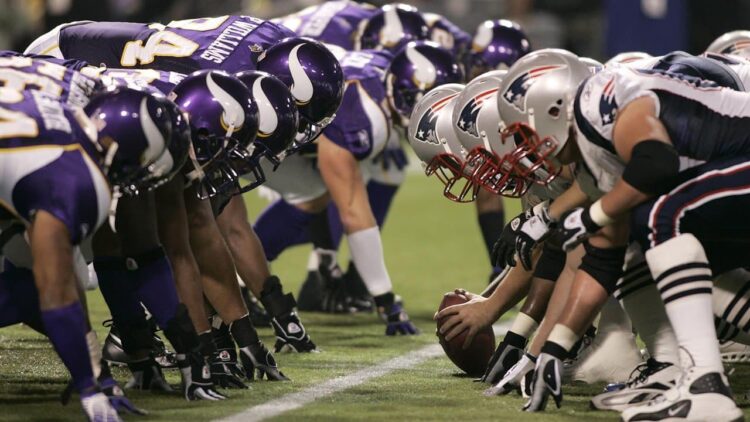 The Vikings don’t appear to be ready for prime time yet. They travelled to New England to take on the Patriots in Foxborough (where the Pats haven’t lost all season) and came away with a 24-10 loss. The Vikings still haven’t beaten a team with a winning record yet this season—and the bad news is that if they plan to make the playoffs, all those opponents will have winning records.

The Vikings stumbled out of the gate in every facet of the game, spotting the Patriots a seven-point lead. The defense stiffened, but it wasn’t until the last couple minutes of the first half that the Vikings offense showed any signs of life. They scored, and actually tied the game in the third quarter, but then the Patriots did what they usually do and turned up the offensive heat and put two unanswered touchdowns on the board.

The loss drops the Vikings to 6-5-1 and they remain 1.5 games behind the Chicago Bears (who lost in New York on Sunday) in the NFC North. The team could fall out of the playoff race with a Washington win on Monday. There are still in the hunt, however, and can help themselves with a win in Seattle next week, as the Seahawks leap-frogged them today.

Last week Kirk Cousins out-dueled Aaron Rodgers. He got a chance to best another future hall of famer in Tom Brady on Sunday. This time he came up woefully short. Brady didn’t do a whole lot, but he did get a lot of time to do it. He was 24 of 32 for 311 yards, one touchdown and one pick for 102.5 quarterback rating. Cousins, meanwhile, had some trouble on his way to throwing 44 passes, completing only 32 for 201 yards, a touchdown and two garbage time picks for a 70.3 rating. Cousins was his own worst enemy at times, throwing some bad passes (short and long) that could have helped move the sticks. The Patriots took away his favorite target (Adam Thielen) and Cousins held onto the ball too long. Allowed Brady’s time to look around, Cousins would have faired better, but he needed to be a lot better on his own to help the team win today.

Dalvin Cook was a bright spot on the Vikings offense Sunday, running the ball and catching it out of the backfield, making some minor splash plays all over the field. In fact, he was best player on the field for the Vikings, as he rushed nine times for 84 yards and was the leading receiver, grabbing five in the first half and finishing with eight for 22 yards. Cook looks great when the game plan gets him out in space, and his growing production and confidence is something to build upon going forward.

The Vikings defense had a large task ahead of them—stopping Tom Brady and the New England offense in their home field in December (they rarely lose under those circumstances). Aside from the Patriots’ first drive of the game, the Vikings held serve and kept things in check, until they got tired late in the third quarter and gave up two seemingly easy scores to the Patriots. While they did pick off Brady late in the game (too late), they offered little to no pressure on him (no sacks and one hit) and he was able to do whatever he wanted. The Vikings defense had their moments, but there weren’t enough to even be in this one in the second half.

The wide receiver duo of Stefon Diggs and Adam Thielen came into the game with some questions marks—both hurting, but Diggs more so. Diggs caught three big passes in the first half to keep the team in it and Thielen grabbed the Vikings first score on a five-yard touchdown pass. But that was about the extent of it (Diggs had five catches for 48 yards and Thielen had five for 22), and it was a big reason for the loss. The Patriots always take away what the opponents do best, and on numerous occasions, Cousins had time to throw and there was nowhere to go with it downfield—as a result, a lot of passes to Cook. But you need to attack the Pats downfield to beat them, and the Vikings inability to do so was due to Cousins and his two favorite receivers.

The ineffectiveness of the offense cannot all be thrown at the feet of the offensive line. They played fairly well when you take away a couple poorly timed holding penalties by Tom Compton. Cousins was sacked twice and hit six times, but at least one of those sacks is on Cousins, who held the ball too long and got himself in trouble. The running game did not have their worst game of the season, and some credit for that goes to the line. We’re not saying that improvements aren’t still needed to be made there, but we are not going to pile on the unit that gets beat up on a weekly basis.

The defense didn’t have a great day, but linebacker Eric Kendricks had a big one, with 16 tackles (eight solo) and a pass defended on the day. He was sometimes covering a speedy running back, such as James White, but that is part of the gig. It is hard to point out too much greatness on a day when the Vikings were beaten this badly, but Kendricks did yeoman’s work on the field, regardless.

Special teams. The Vikings looked discombobulated at the start of this game, but no one looked worse than the field goal kicking team. With a fourth and long coming, punter/holder Matt Wile was required on the field—no matter the call, punt of field goal or fake! He scrambled to get out there just before the ball needed to get snapped on a 48-yard field goal, and his lateness sunk the play before it had a chance to get going. Someone is responsible for this—the special teams coordinator, perhaps?

The Vikings started the game with a swing pass to Dalvin Cook that fizzled and set the tone for this one (and the rest of the team followed suit). They tried a funky screen pass later in the first and it was a loss of four yards. These plays work but are likely more effective after you set them up with a lot of aggressive play calling up the field earlier. I am no OC, but I hate to see the team going sideways before they have aggressively plowed ahead into the teeth of the defense to see what they can get there first.

Going for it on fourth down in the fourth quarter is the right call. The spot by the ref was generous at the very least and definitely wrong. I thought the previous spot on Thielen was bad, as well. The Vikings need to continue to be aggressive on fourth down. They have to do better on the play that is called, however. Head coach Mike Zimmer also got his first successful challenge of the season, which was also a good call and actually led to the Vikings only touchdown of the game.