Vikes at Packers Game Wrap—Vikings Kick Away a Big Opportunity 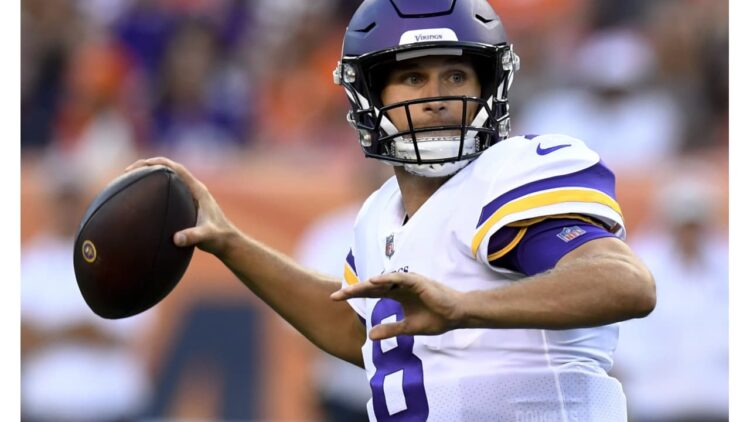 The Vikings and Green Bay Packers played to a 29-29 tie at Lambeau Field in Green Bay. And that statement should feel terrible to Vikings fans. The two teams played a heck of a game with drama and big plays throughout, but mistakes had a huge affect in the outcome for the visiting team. And two Vikings players, wide receiver Laquon Treadwell with a couple drops and place kicker Daniel Carlson with three missed field goals, including the game winner in overtime, were in the crosshairs of those mistakes.

The Vikings were the visitors and a tie on the road isn’t as bad as a loss, but it feels like it is when the team played as hard as they did and still came away without a win. In a game where the Minnesota fans are used to seeing the Packers work their late-game magic, and it was the Vikings who scored 22 points in the fourth quarter to send it to overtime. But they came up a little short, well actually they weren’t short, just a little wide.

“It’s obviously better than a loss and we would have liked to win it down there at the end. But we fought back, we fought like crazy, head coach Mike Zimmer told KFAN radio. “We got down in a hole in a bad environment. Our guys fought back from the deficit—we never waivered on that part of it. We just didn’t finish. We missed three field goals. We got a punt blocked for a touchdown. And quite honestly we could have played better on defense than we played.”

At the end of the day (and we mean that literally), the Vikings will still be tied for first place in the division (with the Packers) with a 1-0-1 record, and now they return home to play the 0-2 Buffalo Bills next week. It will be a long week for a couple players (and some rehab for Dalvin Cook, who left with a hamstring injury) before the team looks to get right at home.

Certainly the biggest story line coming into the game was Packers quarterback Aaron Rodgers’ injured knee. As everyone expected, Rodgers played, and since it was a big game against the Vikings, he played well. The defense did little to disrupt him or make him feel uncomfortable early (until Danielle Hunter sacked him the first drive of the second half). Rodgers worked some of his magic but didn’t exactly have it late in the game, as the heat increased. But he gutted it out with the bad knee and appears to be anxious for more.

“There is some respect on both sides. It’s a great rivalry,” Rodgers told Fox Sports after the game. “Obviously they had a great team last year. You know, I ‘m back; we feel like we’re in the mix. It’s going to be a lot of battles as long as I am play for the Green Bay Packers against Minnesota, and I look forward to it.”

Kirk Cousins checked what remaining boxes that he might have needed to check after Week 1 with an excellent performance in his first start at Lambeau field. Cousins stats line reads 35 of 48 for 425 yards, four touchdowns, one pick and 118.9 rating. But his game was even better than that. Cousins had a couple low throws that his receivers helped him out with but he did everything asked him of to win the ballgame. The 75-yard TD bomb to Stefon Diggs was exactly what Vikings fans have been looking for; the pass to the impossibly tight window to Adam Thielen for the game-tying score is what has been advertised. The coached liked his performance as well.

“He played very, very well,” Zimmer told KFAN radio. “I thought offensively we played well today. We still aren’t running the football well enough. But he bailed us out a bunch of time with some outstanding throws.”

The woes of the Vikings special teams, which a concern all preseason, reared its ugly head on Sunday afternoon. After the Vikings’ initial offensive series failed, new punter Matt Wire has his punt blocked—which was recovered in the endzone for the first score of the game. It put the Vikings in a big hole. Kick returner Mike Hughes had a big return of the following kickoff, but it was about the only bright spot of the day for the unit. The next punt was a touchback that shouldn’t have been. Place kicker Daniel Carlson missed a 48-yard (by about 48-yards) shortly before half. He had a pouch kick late that did little other than to give the Packers good field position. Carlson missed a 49-yarder in overtime and then followed it up with another miss of a 35-yarder to win it, and now he has to hope the Vikings coaches have lost Kai Forbath’s phone number.

Stephon Diggs has a funny Geico television commercial airing in which his “sticky hands” are on full display. On Sunday in Lambeau he showed that the ad is not exaggeration. Diggs turned a very low pass into a very difficult touchdown reception. He ran a great fade route for the two-point conversion that tied up the game late. And he finished with nine receptions for 128 yards two touchdowns and the extra point reception to put together another great afternoon. His buddy Adam Thielen did pretty well also (12 catches for 131 yards and a score), so the Vikings are in great hands at the receiver position. Diggs plays football, says the commercial. He certainly does.

We saw it all training camp and OTAs: Cousins to Laquon Treadwell. We didn’t see it much in preseason, however, and certainly not in the first game of the season. But in Lambeau the connection finally took a step forward when Cousins hit Treadwell on 14-yard post route for Treadwell’s first touchdown reception of his career. But then it took an about face. On his second target on a third down in the second half, Treadwell started running before securing a floater of a pass (from Cousins, who was being dragged down at the time) and dropped an easy conversion. His third target was even worse, a bullet in his hands on one of the final Vikings drive that went right through his hands right into the hands of Ha Ha Clinton-Dix, killing what could have been a game-winning drive. Laquon giveth, and then he giveth away. He is going to have to look over his shoulder for a replacement going forward, in addition to watching the passes into his hands. There is no longer any defending Treadwell’s play, even though this section started out doing so.

Defensive pass rush was non-existent in the first half, and the gimpy Rodgers appeared to move around with ease. They started showing up in the second half with some pressures, hits (nine) and sacks (four) and really helped keep the team in the game and giving the offense a chance to get back into the game. The defense had plenty of mistakes overall, leaving the tight end Jimmy Graham open a couple times that made it difficult for the team’s comeback. They were playing Aaron Rodgers, but a limited one, so they should have limited to fewer chances than he got in the game.

Some miscommunications between Cousins and his receivers thwarted a couple drives in the first half of the game. One receiver cut off a route and prevented a long strike and later Thielen were not on the same page and led to the short-circuiting of a drive. New quarterback, offense and OC, we get it, but it’s the regular season and that stuff should not be happening.

Andrew Sendejo, who loves to hit and avoided the hitting penalties on opening weekend, did not in week two. He hit Devante Adams coming across the middle on a big third down play and was called for hitting a defenseless receiver—tacking on an extra 15 yards to the catch. The Vikings could have gotten off the field with a pass defense and instead gave the Packers great field position and an eventual field goal. This kind of penalty adds insult to injury. It must be said that Sendejo avoided a similar penalty later in the game. Hopefully the hits are not a sign of things to come for Sendejo.

The Vikings staff missed an opportunity to challenge a call on the field that would have kept the Packers from getting a big play. Wideout Geronimo Allison caught a ball with his knee on the ground and cornerback Trae Waynes touched him down. Allison got up and made a first down and it became a huge gain—and the Vikings didn’t challenge the call. Someone on the staff should have seen it since the FOX TV broadcast crew did.