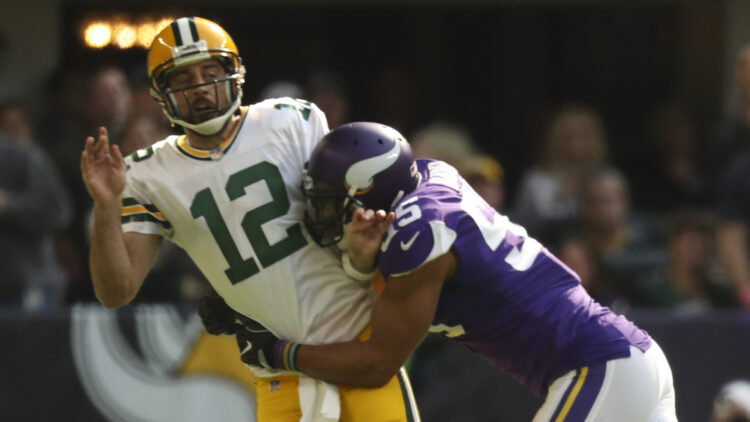 The Vikings hosted the Green Bay Packers at U.S. Bank Stadium on Thanksgiving weekend, and they thankfully didn’t end up like turkeys. Both team started a little nervous and out of sync, but then scored on four straight drives to get things going. Tied at halftime (like they were at the end of the first game), the teams traded blows and the Vikings came out on top with a huge 24-17 win.

The Vikings were the better team, as two missed field goals before halftime could have extended the final margin. But the offensive kept punching, the defense kept weaving and the Vikings came out on top.

The win moves the Vikings to 6-4-1 (still 1.5 games behind the Chicago Bears in the North), and the road doesn’t get any easier from here. Next week it is another big game under a late-game spotlight, as they face the New England Patriots in Foxborough. If you want to play with the big dogs in the playoffs, you need to beat them in the regular season. It started today and continues next week for Minnesota.

Last time out, Kirk Cousins out-dueled Aaron Rodgers in the tie at Lambeau. He threw four touchdown passes to Rodgers’ one and for 425 yards to Rodgers’ 281. In the rematch, Cousins once again came away with the upper hand—particularly because he got the win. Things started out a little shaky for the Minnesota signal caller, but he steadied the ship and by the end of the game, he was on top again. Cousins was 29 of 38 for 342 yards, three touchdown passes and a 129.5 rating (Rodgers finished 17 of 28 for 198 yards and one touchdown pass, a 94.0 rating). The Packers are now 0-3 at The Vault, and if the Vikings hired Cousins and told him job 1 is not to lose to the Packers, then, so far, he is 2-0. Officially, he is 1-0-1 with the tiebreaker and that is pretty good.

Dalvin Cook scored his first NFL receiving touchdown to get the Vikings on the board in the first quarter. It was nice bullet from Cousins near the right sideline, and Cook, with the help of a nice opening block by Pat Elflein, did the rest, racing and juking to the endzone. He seemed more excited about the opportunity to celebrate than the score (see below), but the run after catch was a thing of beauty.

Stefon Diggs was the big target for Cousins early and Adam Thielen was his target late, but both players scored a big touchdown for the team and were huge factors in the win. Diggs was eight catches for 77 yards and a score that finished in the corner of the endzone to tie the game, while Thielen was eight catches for 125 yards and a twisting, turning backward flop across the goal line. It was nice to see both back at the top of their game. Diggs and Thielen each had jaw-dropping catches at time, and they were needed to get the team over the top.

At some point in the second half (after the teams played to a 14-14 tie in the first) that the defense had to win this game for the Vikings. And they did just that. The numbers show that they shut down the Packers, and they came up huge in the second half when the Vikings need them to—just three points allowed in the second half. They sacked Rodgers four times and gave up just 254 total yards. The defense deserves a game ball for this effort.

If a portion of the game had a movie title, it might have been: “Kyle Rudolph—The Awakening.” After weeks of everyone from the media and fans to the Donut Club wondering where he has been on the offensive stats sheets, Rudy came up with one of his better games of the season. He was Cousins’ security blanket in the first half, catching seven passes for 63 yards (his total for the game). Whether it was by scheme or ineffectiveness or Cousins’ looking past him for Diggs and Thielen (perhaps), it was great to see him weaponized again.

Xavier Rhodes hasn’t exactly been himself this season, and it showed on the Packers second series of the game. Rhodes was chasing Davante Adams down the left sideline and then started playing hands tag with the Packers wideout as they ran. The play turned into a 26-yard penalty, which in turned became a touchdown to Adams against Rhodes. Adams got Rhodes on the lone touchdown pass from Rodgers in the first game, as well. Rhodes numbers this season are middle of the pack according to Pro Football Focus. He has been on and off the injury report this season, and appears to playing hurt(and now he is really hurt), but his play has just not been that of the shutdown corner that he has been in recent seasons. The Vikings, suddenly thin at corner, need him to get well as soon as possible.

Kicker Dan Bailey’s night was interesting to say the least. He missed two field goals before the end of the first half (not unlike his predecessor missing couple in overtime against the same team earlier this season. The second was unfortunate in that he made that kick, but it was taken off the board due to a false start on the Vikings. Then he got hit after the following miss and no penalty was called. On the game, he made one field goal and three extra points, but we are sure his head coach is looking for more—especially when he is kicking indoors.

Limbo celebration. Okay, I enjoyed the limbo celebration. It was quickly constructed and put into play. I like the play theme they have going with a lot of their cellies. But please, Dalvin, make sure you get across the line before calling for the celebration. That move to do so came awfully quick after he scored. But do it so more, Cook. I promise not to complain.

Too many Packer fans in attendance. (Or in other words, “too much volume”). The season-ticket holders had done so well in the first two years of U.S. Bank Stadium. Time to turn down the Packer volume next season again.