Pack at Vikes Preview: Loose the Tie that Binds 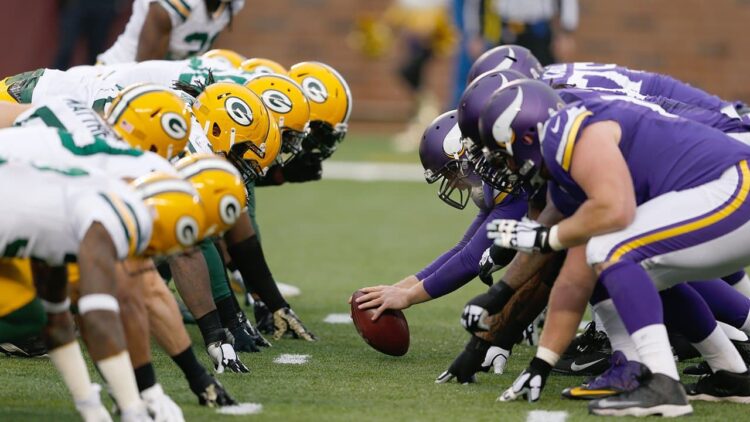 It’s Packers week in Minnesota. Not exactly like Turkey week across the country, but darn close around here. Somehow, thought, things feel a little different this season. The Vikings lost a big game in term of division standing last Sunday in Chicago and the Packers, at 4-5-1 are a little down this season, so the annual battle royal appears to have a little less luster to it.

Don’t believe it for a minute.

The Vikings host the Green Bay Packers at U.S. Bank Stadium on Sunday Night Football—and it was scheduled in that prime time spot for a reason. It’s a big game.

Pay it no mind that these two teams tied in the second game of the season, and that they both trail the Bears in the chase for the NFC North title. In fact, the 29-29 tie in Lambeau (the first time in NFL history that this particular tie score occurred) just left all involved with a bad taste in their mouths. It kind of felt like unfinished business—at least from the Vikings standpoint in that their field goal kicker missed two kicks in overtime to win it.

“It felt like a loss, yes,” Zimmer said of the tie. “We kick a field goal and we go home and we’re happy. Then around here, I do things for wins. So, the first thing [the staff] asked me, ‘Are we doing [such and such] on Wednesday for the team?’ I said, ‘No, we didn’t win.’ That was the first time I had to deal with that. So, I kind of preach wins around here more so than ties. But then again, I did think maybe it will help us but maybe it will hurt us, too. I don’t really know.”

Packers coach Mike McCarthy has a slightly different opinion of the game.

“The game itself is always a challenge when we play the Vikings,” McCarthy said, addressing a question about the tie. “For as hard a game as it was for both teams, the length of the game is something that we thought we handled from a preparation standpoint moving forward. But that really affected our team, probably the next couple weeks. We had a couple of injuries come at us the following week or two and I felt the length of that game played into it.”

Regardless, the loss to the Bears was a definite buzz kill. It dropped the Vikings into second place by 1.5 games, which is not insurmountable but is a tough row to hoe. Even more, thought, it was how the Vikings played that injected the E.coli into fans’ Thanksgiving turkey. They turned the ball over three times and turned the stomachs of the Purple faithful—who have been leaping off the bandwagon in droves this week and might be already looking forward to fixing the problems in the next season’s draft.

The fans need to rally, however, just like players, as the team is anywhere but out of the division/playoff race (they would be seeded sixth if the season ended the day before Thanksgiving). Zimmer knows how important this game is:

“It’ll be a great test for us this week,” he said. “I have the utmost respect for Green Bay and Coach McCarthy and the things that they do there. We’re going to need all of our fans in full force for this one. It should be a heck of a football game.”

The Packers aren’t the same team the Vikings saw in September at Lambeau. Quarterback Aaron Rodgers was still hobbled by knee injury he had suffered the previous week against the Bears and a little less mobile than we all knew him to be. But that didn’t really matter to Vikings cornerback Xavier Rhodes.

“Did you seek the Chicago-Green Bay game [in Week 1]?” Rhodes asked the reporter who asked him about Rogers’ mobility. “That [injury] didn’t change anything with him. He can sit in the pocket and not be mobile and still throw bombs, darts, on the money. I think it is more of his pocket presence and how smart he is in the pocket. He can feel a blitz coming from this way without even looking. You can see how he moves around in the pocket. He’s pretty good at that. He’s just pretty good at doing everything. This man is 100 percent going to the Hall of Fame first ballot when he retires.”

Well, he isn’t retiring before Sunday night, so the Vikings have to face him. They also have to face another Aaron in running back Aaron Jones. Jones was not on the field in Week 2 since he had been suspended, and now he has taken over the running game duties for Green Bay and really made it his own. In the four weeks since McCarthy decided to feature him, Jones has a total of five touchdowns and averaged 111.5 all purpose yards. He is quick, improving as a pass catcher and the Vikings are sure to see plenty of him.

“He can run the ball between the tackles and he can run the ball outside, as well,” Vikings defensive end Everson Griffen said. “Basically, we do things as a team. Play your keys; get off your block, don’t stay blocked; and gang tackle. That’s the only way to do it.”

On offense, the way to do it might be getting the run game going for Minnesota. Last Sunday night they ran the ball 14 times for 22 yards and that aspect of their offense was certainly missing. But that may be where to attack the Packers defense, which is fifth against the pass (giving up 223.0 yards per game) and less stout against the run, where the are ranked 26th in the league (126.1 yards per game).

The Packers defense gives up 24.3 points per game (ranked 16th), but the team itself has yet to win a road game this season. They will be coming into The Vault every bit as desperate as the Vikings (maybe a little more) to get their season back on the right track toward the postseason.

Everything is on the line for this one—the season series, the tie-breaker and perhaps the first step in a run toward the postseason. As if the bragging rights in this latest installment of a heated rivalry isn’t enough (Anthony Barr was a full participant at practice on Wednesday, so look for him to reacquaint himself with his old buddy Rodgers on Sunday), expect to see it all out there on the field. And a Vikings victory when the final seconds tick off the clock.