Lions at Vikings Preview–Silence the Roar 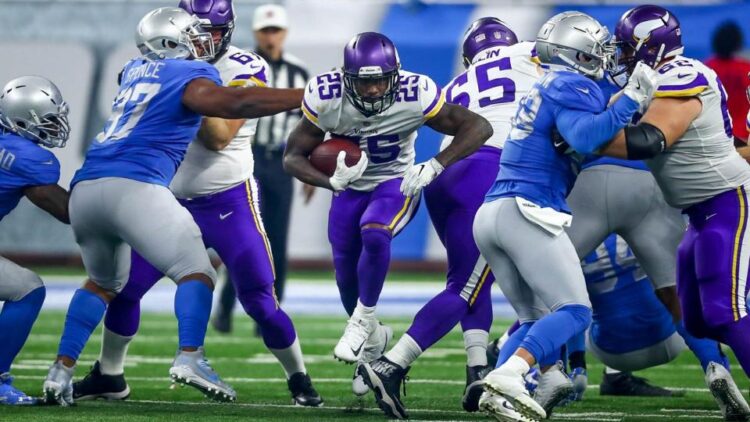 In the Minnesota Vikings locker room at TCO Performance Center, Dalvin Cook has a chart outside his locker that offers a descriptor of all the games this season. The Vikings are preparing to take on the Detroit Lions at U.S. Bank Stadium on Sunday, and for that game the descriptor is “Revenge Game.” In years past, that would have hardly been the case when the Vikings met the Lions, but this season it is a revenge game—and so much more.

The Vikings under head coach Mike Zimmer have never beaten the Lions at U.S. Bank Stadium, which includes the past two seasons. In fact, the Lions have won three of their past four games with the Vikings, and five of the past eight since Zim came to town in 2014. So, is he looking to exact some revenge on the Lions, a team the Vikings (who are 72-39-2 against Detroit overall) have never really had to exact much from.

“Big division game this week,” Zimmer said. “Excited to get back out there and continue to improve, try to get better. I feel good about this team. We just have to do a little bit better job finishing.”

Okay, so Zim isn’t buying into the media/fan contrivance that this is any more than a big divisional game—which it is, since the Vikings have only played one NFC North game in the first half of the season and it ended in a tie. Furthermore, one win separates the top of the division from the bottom, so all these games are definitely huge.

“I think the division games are very important, obviously,” Zimmer said. “But we try to take it one game a week, focus as hard as we can on this particular game, and obviously it’s a division game and it’s a big game, but it’s just how the schedule came out.”

But, perhaps, Cook is buying into the hype—it’s his season chart after all. And last season, in week four, at U.S. Bank Stadium, against the Lions, Cook’s rookie season ended with the tearing of his ACL. So, it is a revenge game in the sense that the Lions won the game, but maybe it is a little more in that to Cook, who went through a long offseason of rehab, and has missed five games with another injury (hamstring).

The good news is that Cook returned to practice on Wednesday, along with cornerback Xavier Rhodes (who missed the last game with an ankle injury), tackle Riley Reiff and safety Andrew Sendejo. Cook and the offense will be trying to continue the rushing game resurgence of late. This week they will face the 31st ranked rushing defense in the league (allowing 144.6 yards per game on the ground). Last week, Latavius Murray and company did well against the toughest rush defense in the NFL, so this may be just the week for Cook to return.

“The one thing about it is that they’re stout and physical up front,” Zimmer said. “They’ve given up some runs, but there’s a lot of no-gainers in there, too. They’re very physical in there, and we’re going to have to stick with it, going to have to keep pounding and keep fighting, stay on blocks because these guys are big, physical players. [Their] linebackers are getting downhill.”

The Lions are a little stingy on pass defense (with tough corner Darius Slay in the mix), currently the seventh ranked pass defense unit in the league (giving up 223.1 yards per game). Slay will likely spend some time covering Adam Thielen, who is (arguably) the best receiver in the league right now. Zimmer said he has seen defenses trying to scheme against Thielen, which makes sense, but they haven’t been very successful. Zimmer sees the Lions defense stack up this way:

“Played a lot of man,” he said. “They’ve got good players back there—two safeties back there are very good. Obviously, Slay is a really good player, but they play a lot of man and try to disrupt you at the line of scrimmage.”

They will still have to pick their poison amongst Thielen and Stefon Diggs, who caught 10 passes for 119 yards and a score last weekend. He will have something to say before this game is through.

On the defensive side of the ball, the Vikings have a new face to concern themselves with. Rookie running back Kerryon Johnson, who ran for 158 yards against the Miami Dolphins a couple weeks ago, is another weapon for defenders to be concerned about.

“He is good,” Zimmer said. “Very good. Runs hard, speed to the perimeter, catches the ball well, has been good in protection. He is a good back. I think [the Lions are] more committed to running the football. He has been running the ball extremely effective. I’m not sure it’s changed the run game all that much. There is a lot of similar runs they’ve had in the past, but they’re much more effective at it.”

Someone they don’t have to worry about is wide receiver Golden Tate, who was traded to the Philadelphia Eagles on Tuesday. Far from a move that says the Lions are giving up, it simply shows the confidence that the team has in its other receivers, such as Marvin Jones, Jr. and Kenny Golladay.

“The biggest point for me to make sure everyone understands is that this also shows a lot of confidence in the people that are in that room,” Lions head coach Matt Patricia said “There’s great players in that room, and there’s a lot of them. And there’s a lot of guys that have the opportunity to make plays and go out there and play at a high level, and we’re all good with that.”

Tate lead the team in yards and touchdowns, but there is still plenty of firepower in the passing game with Matthew Stafford chucking the football. The Lions are 17th in points scored per game with an average of 24.4.

“One of the areas he’s gotten better at is the red zone,” Zimmer said of Stafford. “He had thrown a lot of turnovers in the red zone in the past. He’s taking good care of the football now. As far as arm strength and things like that where you notice with quarterbacks is typically their arm strength doesn’t change that much or athletic ability doesn’t change. There was a corner blitz the other day that he wasn’t looking at and he ended up throwing to the X-receiver against Miami and so those kind of things they tend to see more and react to it quicker.”

So, some of the Lions-type things (such as turnovers and red zone failures) that the Vikings have come to depend upon may be disappearing. Turnovers should be an emphasis for Minnesota, since the Vikings (like most teams) are winning games when they win the turnover battle and losing them when they are on the short of that stick. They just might have to go out and win this one the old fashioned way by being the better football team.

And the Vikings are just that. They need only go out there and prove it by not making mistakes at home in a very winnable game.