Cornerback Battle is One “of” the Ages–Old vs. Young 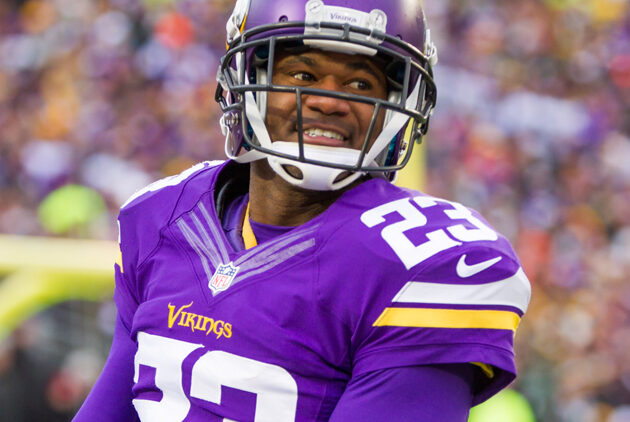 There is an old saying in the NFL: “you can never have too many cornerbacks.” Or maybe that is just Vikings head coach Mike Zimmer’s saying, because since he came to the team in 2014 he has been acquiring plenty of them. And in 2018 that has resulted in a fairly crowded cornerback room at TCO Performance Center, where Zimmer and his staff will have some tough decisions to make.

At the top end of the group, Xavier Rhodes has “closed down the roads” to anyone challenging for his position. He is considered near the top in the league for cornerbacks—and according to his teammate, cornerback emeritus, Terence Newman, he is the best—certainly when it comes to press coverage.

“He’s the best one to do it right now,” Newman said of Rhodes. “What’s unbelievable about him is that he’s big and he’s got some of the most ridiculous lateral movement for a guy his size. I’ve not seen that. I’ve played with Darren Woodson and he could play in the nickel and he could do it, but for Xavier to be that big and move like he does laterally is unbelievable.

“His feet. I’ve really never seen him have bad steps ever. And it’s a tribute to him because he works hard at it. He’s ready to fight everybody that talks to him. He’s just the ultimate competitor. I am not surprised that he is that way, I am just surprised that he has the physical tools to be the “it” corner. Everybody talked about [Darrel] Revis, but I think Xavier has the ability to supersede what he’s done.”

Okay, Rhodes is locked in at the starting left corner. And we can put Trae Waynes in at the right corner, where he was last season and has been all spring and summer. Waynes took a while to solidify that spot after being drafted by the Vikings in the first round in 2015, but he appears to be Zim’s guy for the coming season.

But after that it gets a little murkier. There is quite a battle going on at the slot position between the aging vet Newman and third-year corner Mackensie Alexander (who is taking most, if not all of the snaps at slot corner). Then there is rookie first-round pick Mike Hughes, undrafted rookie free agent Holton Hill and journeyman Marcus Sherels. Add to that Horace Richardson, who has one year of experience, and rookies Craig James and Trevon Mathis to make 10 and you better hope that the CB room at TCO has a lot of chairs. (I am sure it does).

The battle for roster spots is on. We have seen Mathis with a nice diving pass defense earlier in the week, and the entire planet (at least the portion concerned with the Purple) is fighting for the rights to lead the Holton Hill bandwagon. Hill is 6-2, 196 pounds and the subject of many reporters’ questions at camp. Newman answered one:

“We haven’t been able to press until today, but that is something I can imagine [from him] because he’s tall; he’s a big corner,” Newman said of Hill’s physicality on Monday. “I think it’s going to be something where he creates a bunch of matchup problems because he’ll be able match up with tall guys, short guys, and he’s got great size.”

If it were up to us mere observers, Hill would likely be on the 53-man roster. He has impressed many in camp with his speed to go along with his size and will be tough to cut.

Of course, we have to make room for the first-rounder Hughes, who is lightning fast (on defense as well as a kick returner), impressed the head coach with how quickly he has picked up Zimmer’s complex defense and has that lofty draft status. Plus, he knows the right things to say to reporters:

“It’s a lot of fun, Hughes said of camp. “I’m just trying to be a sponge; absorb everything in, all the information I can. Not only from the playbook but the bench and everyone who has done it. [The veteran players] have been throwing me a lot of knowledge, and I’ve been taking bits and pieces from everybody’s game and am trying to add it to mine and just make myself a better player.”

According to Newman, who, in his 16th season, might be on the bubble for the first time in his career, that is exactly what the vets are supposed to do.

“Everybody is trying to get better and perfecting their craft, so [the young] guys have asked of guys who have been around, ‘hey can you help me after practice?’” Newman said. “That’s what we do. We’re a team and we’re trying to help everybody get better. We need as many people as possible to play well throughout the preseason and stay healthy in practice and just compete. To get our receivers better, to get our offense better and get our defense better. We have to work together and try to help each other get better.”

It is the way of the NFL, the older players help the younger players learn the pro game and the younger players eventually take the older players’ jobs. It’s tough, but it’s reality. And nine-year veteran and former Golden Gopher Sherels is in the midst of the battle of his career. Every year we thought he would be cut. But every year he sticks around because he makes plays and rarely makes mistakes—such as dropping a punt or kickoff. That always impresses coaches—even teammates.

“Marcus is a baller! That dude, all he does is make plays,” Newman said. “Watching him play, it’s fun to watch him. He’s probably one of the most athletic people out there. All he does is make plays. Can’t say anything better. He’s quiet and a consummate pro. He goes about his business. Quiet; doesn’t say anything. He’s not crazy . . . like most of us. (I’m not crazy, though.)”

Sherels has been particularly active on the defensive side of the ball this summer. Generally kept on for his excellent special team play, he is a backup corner and appears to be (at least to this observer’s memory) engaging in the battle even more than in the past—he is making plays.

Sherels can see the numbers, and he knows that Hughes is pushing him in the return game as well as on the cornerback depth chart. But it’s just that versatility that gives both players a shot to make the squad but also make an impact this season. Sherels, back in the pre-Zim era, actually played a little (very little) safety in a very desperate, injury-depleted secondary. That is the kind of ability that keeps aging player like Sherels and Newman around.

“It’s really important,” Zimmer said regarding cornerback versatility. “At some point defensive backs get hurt and you may to take a guy and move him back to safety, or you may have to move him outside to corner or move him inside. And being able to do that, gives a lot of flexibility to the defense.

“I’ve been in some games where the nickel back got hurt, for instance, or two nickel backs have gotten hurt, and so you are really limited in what you can call. So, you have to finish out the game with certain calls because you stuck a guy in there because he really only knows one or two things.”

The last thing a head coach wants to do is shorten their playbook due to their players lack of versatility, so the more you can do the better. The younger guys have a longer future ahead of them, but they are learning the game (generally starting with just one position), while the veterans may have experienced the entire defensive backfield as their bodies begin to slow down—and savvy and experience become crucial.

It’s too early to say what the Vikings will do with their spate of cornerbacks for 2018, so the battle continues–there are plenty of player with their jobs on the line. Stay tuned to see who will still be standing when the last cuts are made.