49ers at Vikings Game Wrap: A Decent Start for the Purple 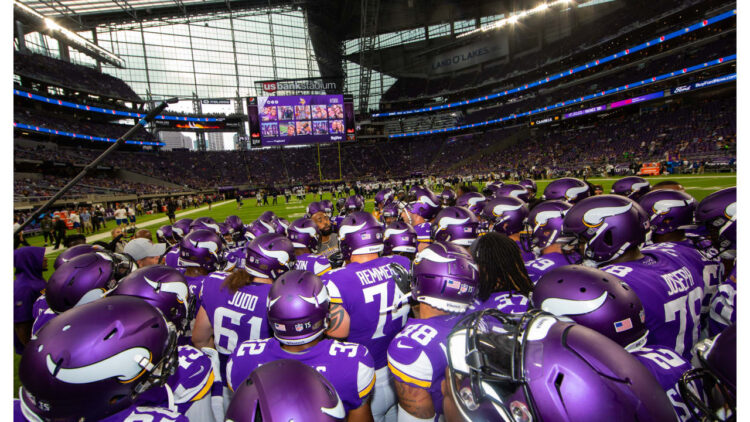 The Vikings can sell beer at the U.S. Bank Stadium this season because they didn’t lose the opener. And Vikings fan might be cracking a beer after watching the home team build a lead against the visiting San Francisco 49ers only to have the game tighten up a bit. The Vikings finished with a 24-16 win and it was a decent opening salvo.

The Vikings defense were the stars early in the game, thwarting Jimmy Garoppolo and the 49er offense in the red zone more than once—rookie cornerback Mike Hughes making the big play that temporarily opened up a tight game. The offense did it’s job in tacking on another score to make it a two score game, and that was all the vaunted Vikings defense needed to salt the game away.

The Vikings move to 1-0 on the season with a home win they needed to get some confidence rolling as the move into an early difficult part of their schedule. Next week is a trip to Green Bay to face Aaron Rodgers (who has a score to settle) and the rest of the Packers that the Vikings swept last season. They appeared ready for the challenge after the win over the Niners.

In his first game as a member of the Vikings, Kirk Cousins showed his worth (at least part of it, since he is being paid $84 million) in leading the team to a win?? on opening day. Cousins moved well in the pocket, making plays with his legs, as well as his arms. He had a few high throws form time to time, but generally hit his receivers in stride—there were no passes prettier than his touchdown strikes to Stefon Diggs and Kyle Rudolph. The pass into Diggs was a thing of beauty. On the day, Cousins completed 20 of 36 for 244 yards, two scores and no picks (a 95.1 rating). He even put his body on the line running for a first down and getting drilled late in the game (we likely won’t see him doing much of that again). Cousins had command of the offense and was the leader on the field—the Vikings offense are going to be in good hands.

Dalvin Cook is back to being the focal point of the Vikings offense. In his first game back after season-ending knee surgery in 2017, Cook was put to work quickly (had the ball in the first four plays of the game) and for much of the game. He finished the game rushing 16 times for 40 yards and catching six passes (tied for the most on the team) for 55 yards. Cook got hit plenty and shrugged it off, although he did have a fumble early after a bruising run that if he had held on to it might have changed the complexion of the game. In all, Cook looked very good in his first game after his promising but unfortunate rookie year and it is very good to have him.

Mike Hughes burst onto the scene with a big game for the Vikings. Getting plenty of snaps after Trae Waynes went down in the first half, the rookie cornerback came up with one of the biggest plays in the game—a pick six that worked to break the game open in the third quarter. He followed that up with another big play in the Vikings end zone, leaving his own man and breaking up a sure touchdown for Niners. It was all bouquets of roses for the rookie, as he did give up a long pass play in the fourth. But all in all, he was pressed into duty his first game and responded in a huge way.

The Vikings defense back to its usual form, by keeping the 49ers between the goal lines (rather than across it) for nearly three quarters of the game. They were at the bend, but don’t break best until the Niners finally struck pay dirt. The defense harassed quarterback Jimmy Garoppolo all afternoon (despite the elusive Niners QB getting loose to throw at scoring pass into the corner of the end zone). They kept good coverage on the Niners receivers, except for tight end George Kittle (who had four?? grabs for 54?? Yards). Statistically, the defense gave up 327 yards (90 of them on the ground) and forced a fumble and made three interceptions and sacked Garoppolo three times. They look to be back and much stronger than they did the last game we saw them play.

Everyone was worried about the offensive line coming into the game, particularly against a decent defensive line. The unit acquitted themselves quite well, giving Cousins time to operate most of the afternoon. They could have opened a few more holes for digs, and not all the sacks (three) could be completely pinned on them. It’s a good start but they will to get better each game.

Hopefully Daniel Carlson doesn’t read the morning paper or he would have read where head coach Mike Zimmer is worried about his young kicker in Star Tribune story. It appears as though he hadn’t (or else it didn’t affect), as he hit his one field goal attempt (48 yards) and made all three extra points. Carlson came into the game with some pressure, even before the newspaper quote, and he responded. Don’t expect that pressure on the rookie to abate anytime soon—it seems that is the way the coach wants it.

We are probably going to some bad calls this season—we always do—but they started a little early. Bad calls: The holding call on Xavier Rhodes in the end zone (which for my money was a little specious) was one. The false start that was called on a play the Vikings held the Niners on third down, both worked to extend the drive. Right call. Bad time for it to happen. Also, I don’t understand the penalty call on Sheldon Richardson, who was flagged for roughing the passer. But I think I will be writing that a lot this season.

Turnovers will kill you (Dalvin Cook) and save you (Harrison Smith with the recovery near their own goal line). They are huge momentum swingers, but neither resulted in points. The Vikings were moving when Cook, who made a great run, didn’t wrap up the ball after breaking a handful of tackles, so it might have cost them points. He won’t make the mistake again.

It’s the first game of the season, so not everything is going to go as planned. There were a couple funny plays taking place that remind you this is still goofy game. Andrew Sendejo made a great grab for an interception in the end zone but was ruled out of bounds—way out of bounds, but he dragged his toes anyway. Excellent, athletic move for the DB, but it came too late (not enough presence of mind??). later, the Vikings tried to snap the ball on offense, and everybody seemed on line with the snap count, except new center Brett Jones—who held the ball while everybody moved. It looked like he was messing with the offensive unit. Great stuff. It should probably be ending.

Injuries: Trae Waynes made a big pass break up in the end zone and immediately signaled the sideline. He received some treatment on the sideline for a knee injury and didn’t return to the game. He return was called questionable, so the hope it isn’t anything major. Additionally, Xavier Rhodes left the game with appeared to be a concussion (he was clear and returned). It is a light day for injuries but since they both came in the same position unit, it could be troublesome. The ascension of rookie corner Hughes couldn’t be more important.