Vikings at Packers: It’s Never Too Early to Call This Game Crucial 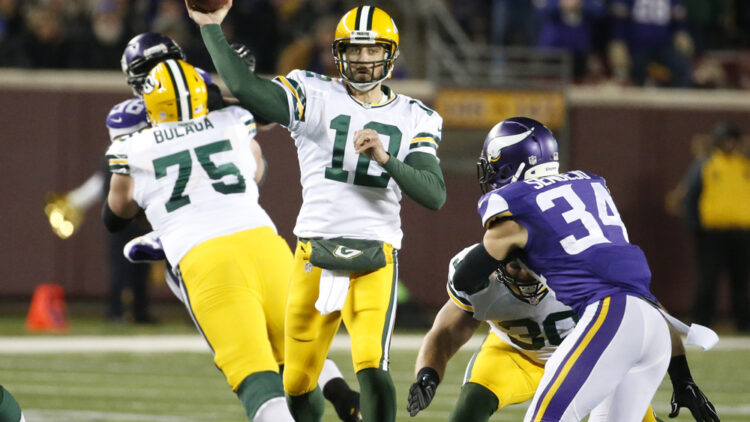 The Vikings dispatched the 49ers 24-16 and not only started the year on a winning note but came out of the contest relatively unscathed, although cornerback Trae Waynes did exit the game with a knee injury and his status is uncertain for Sunday’s game. Perhaps the most salient point in all of this was the successful Minnesota debut of quarterback Kirk Cousins, the prize fish that the Vikings landed in the offseason and one they believe will be the key piece of a Super Bowl puzzle come February.
The stat sheet says that Cousins threw for 244 yards, two touchdowns, no picks, and fostered a 95.1 passer rating but that doesn’t tell the entire tale. Cousins exhibited a cool and calm pocket presence even under a surprisingly menacing Niners’ pass rush. The 30-year-old veteran was hit nine times and sacked thrice but displayed the grit and determination Vikings’ fans were counting on when Cousins took off and slid head first trying desperately to make a first down and preserve the Minnesota advantage. He came up short but the effort was appreciated by his teammates and particularly head coach Mike Zimmer who said, “Hey, when the game is on the line, we’re trying to get the first down. Go for it. I’m all in.” That doesn’t mean that the coaching staff wants a steady diet of Cousins Kamikazes but it is a testament that the newcomer has already arrived and looks to be a solid fit in an offense with so many explosive weapons. l

The NFC North will not be a cakewalk regardless of which team emerges from the fray to capture the title as the Bears are now legitimate threats and the Lions have the long arm of Matthew Stafford to keep it interesting. The team they will face on Sunday now has their future Hall-of-Famer back under center as Aaron Rodgers will be locked and loaded when he and the Packers greet their familiar foes from Minnesota. But before we break down this pivotal game – yes every time these teams meet it’s pivotal regardless of the calendar especially when they are both the class of the division let’s click on over to our friends at Bovada, one of the leading and most reputable online sportsbooks in the industry, to see how they view this upcoming NFC East clash, but before placing some action check their complete review. The early line has the home field Packers as 1 ½ point favorites but it should be noted that the Vikings are 3-1 both straight up and against the spread over their last four meetings against Green Bay.

The last time these teams met the Vikings traveled to Green Bay and blanked the Packers 16-0 in December. It was the first time in nearly a quarter of a century that Minnesota had held Green Bay scoreless but it was Brett Hundley slingin’ for the Packers and not Rodgers. Yet, it’s hard not to be optimistic about Minnesota this season as they now have stability at the most important position on the field with Cousins signing a long-term deal and a defense capable of ringing bells all season long. The truth of the matter is that as talented as Rodgers is, the formidable Vikings’ defense is overwhelming and the Packers simply can’t match the swarming, tenacious defensive unit of Minnesota. Despite Rodgers’ best rendition of Lazarus last week, in which he was carted off the field in the second quarter only to return to throw for three TD strikes, erase a 20-point deficit, and lead his team to a 24-23 victory over the Bears, Minnesota’s defensive unit won’t allow that to happen.

They say if you’ve got a hunch – bet a bunch. This is a stellar early test for the Vikings and Cousins will experience first-hand one of the greatest rivalries in sports. Although the oddsmakers at Bovada are currently dealing the Vikings as slight underdogs, that could change at kickoff. Rodgers could very well feel the effects of last week’s knee injury this coming Sunday afternoon and if he does, this one could be over sooner than later.