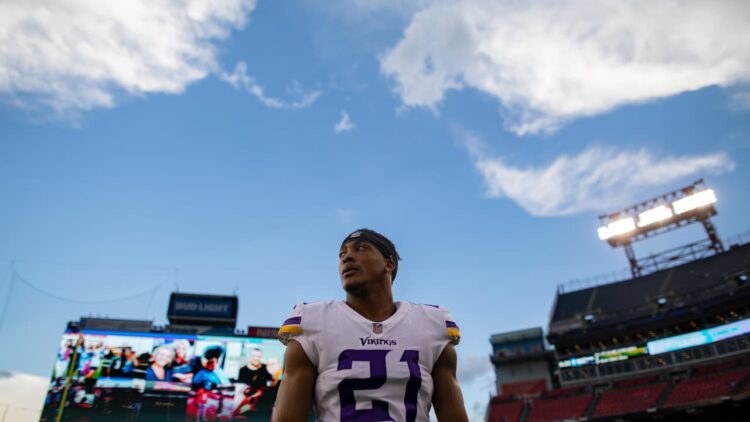 The 49ers were in town to face the Minnesota Vikings, a season after the Vikings were a game away from the Super Bowl. Kirk Cousins started his first regular season game as a Viking, and while he also earned his first win as a Viking, he also clearly played at a level he isn’t typically used to. Finishing the game with completions against attempts, Cousins was about nine and a half percent under his career completion percentage (which was 65.5% before Sunday’s game). It was clear this pre-season that this Vikings offense still had a lot of improvements to make in terms of learning new offensive coordinator John DeFilippo’s offense and just basically getting to know one another in terms of timing. Beyond that, the offense also had it’s star running back returning after missing 12 (regular season) games last season thanks to a torn ACL and while he looked as good as he did in the first three full games last season, he still also has to get back into game shape and also learn the nuances of the patchwork offensive line.

The clear star in this game was the defense, though. While they did give up a couple big plays, their three interceptions against Jimmy Garoppolo who was held to 15 completions against 33 attempts (he also threw for a single touchdown, which was objectively an amazing touchdown after rolling out to his left after escaping pressure). The 49ers were ravaged by injury during the game, especially on their offensive line, which helped the Vikings tremendously, as did those turnovers that ended up making all the difference in this game.

Knowing the Vikings players and especially their head coach, they won’t be happy with how this game ended up going, but they’re officially 1 – 0 on the season so it’s great that they ended up coming away with a win considering how large the room for improvement is.

– Rookie Mike Hughes stepped in to fill in for Trae Waynes who left with a right knee injury and who was listed as questionable and did not return. Hughes recorded his first interception while playing on the outside and also had a few great coverages as well and while he did also get beat on a deep pass in the second half, the team had to be encouraged by the play out of their first-round pick from Central Florida.

– Rookie kicker Daniel Carlson was 1/1 for field goals (48 yards) and also 3/3 with extra points, further proving that his pre-season struggle(s) were only a one-game thing.

– The Vikings were able to draw the 49ers off-sides late in the game while pretending to go for it on fourth and short from their own 40-yard line and while the 49ers got the ball back (a drive that ended with a Harrison Smith interception), one has to think that that play was at least partially responsible for how the game ended. I’ve never seen that actually work before (outside of Green Bay?), so it was nice to see something crazy like that actually work in the Vikings favor. Speaking of crazy instances, there was a roughing the passer call against the Vikings that was absolutely brutal and was part of new enforcement of players bodies landing ontop of quarterbacks thanks to Anthony Barr’s hit on Aaron Rodgers last season. Stay tuned for more 15-yard penalties for players being unable to ward off GRAVITY.

– We are doing pre-and-post game shows on our new online “radio” station, The purpleTERRITORY Network. Stay tuned for that by checking our homepage(s) on purplePTSD.com or VikingsTerritory.com, as we’re also doing a few shows during the week including our new morning show, Morning Joes, on Tuesday and Friday mornings (starting at 9:30) and also shows during the evening including Starting Line-Up with Giotto Troia on Wednesday’s from 4 to 6 and The purpleJOURNAL Podcast on Wednesday nights from 8:30 – 9:45!