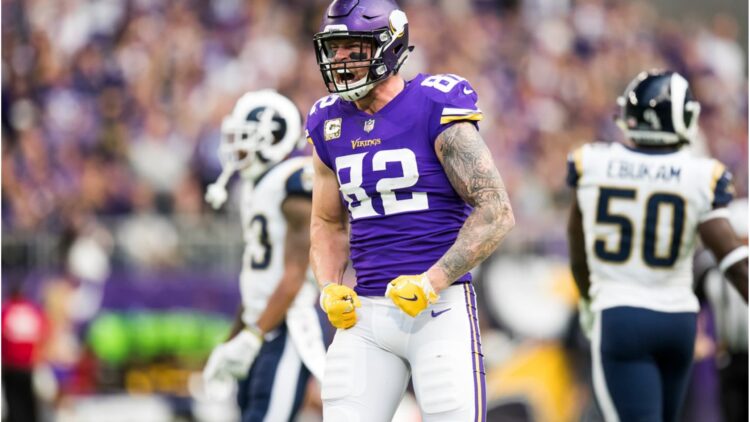 The Vikings strengthened their playoff position with another strong and convincing win—this one in the Motor City. The Vikings packed up their tough defense and brought along their improving offense and beat the Detroit Lions 27-9 on the road.

The Vikings offense started slow, but the stingy Vikings defense kept the team in the game until the offense could get things cranking—which they did with an exhilarating Hail Mary pass right before halftime. From that point on, the Vikings didn’t look back ,as the defense shutdown Matthew Stafford and the ailing Lions, and the offense recalled who tight end Kyle Rudolph is.

The win moves the Vikings to a record of 8-6-1 and keeps them locked in on and in the driver seat for the sixth and final playoff spot in the NFC. The remain a half-game ahead of the Philadelphia Eagles, who beat the Houston Texans on a last-second field goal to make the race continue another week.

The Vikings host the Bears next week and a win gets them into the playoffs (if they couple that win with a Seattle Seahawks loss this week or next, they move into the fifth seed). If the Vikings lose, they can still get in with an Eagles loss next week in Washington. But we’re thinking the Vikings (and their head coach Mike Zimmer) want to send a message to the Bears with a win next at U.S Bank Stadium. If you want to win in the playoffs, you better start with a win over a playoff team such as the tough Chicago Bears so that you get a taste for what’s coming in the postseason.

Things like the First-Half Hail Rudy never happen to the Vikings. I still don’t know how they got two seconds put back on the clock to make it happen, but they did. And then Kirk Cousins sprints loose of the pocket (as though he has been throwing Hail Mary’s his whole career) and fires a near 55-yard pass (officially 44 yards) down the field. In the end zone, two defenders push Adam Thielen out of the way, opening up some space for the tallest guy on the field, former basketball player Kyle Rudolph, to jump up and grab the pass like a rebound for a last-second touchdown. It got Vikings fans off their seats after having to sit through a pretty moribund first half. It was great fun to watch and it changed the momentum of the game. Is that the kind of play good teams make to increase their fortunes? We will see in the coming weeks.

Speaking of Kyle Rudolph, the eight-year tight end just had his first 100-yard receiving game of his career. Gronk he is not, but Rudy had a great game in leading all receivers with nine catches for 122 yards and two touchdowns. The 44-yard Hail Mary reception certainly helps those stats, but Rudolph was the main man for Cousins when Stefon Diggs and Adam Thielen were covered. It was nice to see Rudy getting the targets and making the plays—it bodes well for the offense going forward and displays more of the diversity we have not seen much of this season.

Kirk Cousins had a decent afternoon in Detroit. His stats (21 of 28 for 253 yards, three touchdown passes, no picks and a rating of 137.9) were darn good and more than enough to get the win. Cousins was accurate, on time and looked confident in the pocket, where the offensive line gave him plenty of time to operate. The slow start by the offense was troubling, but after the Hail Mary jump-started the team, the offense began to resemble the one that dismantled the Dolphins last week. Cousins seems fairly comfortable with OC Kevin Stefanksi’s play calling. In addition, Cousins set a Vikings single season record for most completions on the year, which is a testament to the volume of passes he has thrown—but also to his accuracy.

The Vikings defense continues to be the top unit on this team. While the offense slept-walked through most of the first half, the defense kept thwarting the Lions offense, holding them to three field goals despite their having great field position. The defense logged a lot of time on the field in the first half thanks to the offense’s struggles, but they shut down the Lions in the second half even more—hanging a goose egg on the scoreboard. The unit only had three sacks this time out, but they hit Lions QB’s eight times. They shut down the running game and allowed only 223 total yards on the game, bending (only slightly) and not breaking. Eric Wilson had a nice showing in relief of Eric Kendricks, who was out with an injured hamstring. Wilson lead the defense with nine tackles, three for a loss and one of them a sack. Right behind him was Ben Gedeon with eight tackles. If the Viking’s can get to the playoffs, they have a defense that can do some damage—and will be one that few others would want to face.

Stefon Diggs got the Vikings on the board with a short touchdown pass near the sidelines. He ran a decent route and Cousins just fired into his hands. The route carried Diggs up into the stands where he gave a couple Minnesota fans the thrill of a lifetime when he exchanged congratulations with them (one of the best TD celebrations this reporter has ever seen). But the passing game to Diggs and Thielen didn’t materialize into much as it all went to Rudolph on this day. That is good sign                                       that the offense can go through other people, but the relative (to the first half of the season) dearth of production by Thielen (five catches for 80 yards) and Diggs (two catches for 10 yards and the score) is a little bit concerning. Hopefully they bust out a little at home next week against Chicago.

Dalvin Cook and the running game went okay—in the second half. It really struggled in the first half, when the Lions were still excited to be in upset mode. The Detroit defense offered little in the way holes to run through (at least not like the ones we saw last week), until after the Hail Rudy, which changed everything. Ultimately, Cook got off for 73 yards on 16 carries (for a 4.6 yards per carry average). He also had a touchdown called back by an interference call on Aldrick Robinson the Robinson and Thielen argued about for a long time. Cook is a weapon, for sure. And the Vikings have to find a better way to get him to the second level, where he is just a blast to watch run the ball. They will need it next week against the Bears, who are very tough on defense. Cook running free in the Bears secondary will be a recipe for success.

Three and outs. The Vikings started out the game with four of them. You can’t get much more of a stark contrast between this week and last week, when the team scored touchdowns on its first three drives. The first three-and-out was due to very bad field position (inside their own 2-yard line), so that one they get a pass. But  more urgency out of the gate would have been preferred. Starting next week and throughout the playoffs, just such a start will get you beat. Can’t be having it. The Vikings had 11 penalties for 78 yards. Can’t be having that either.

Penalties that give first downs. Interference on Trae Waynes; holding on Mackensie Alexander. In fact, the following series, the announcers were looking to make sure there wasn’t another PI.  Those things lead to first downs, yards, points and losses—even against a woebegone team like the Lions. The Vikings were lucky the Lions lost interest.

Strange in-game decisions. There weren’t a lot of them, but the timeout in the fourth quarter right before Cousins ran a QB sneak and got the first down on a fourth down play (that would have iced the game) was one of them. We’re not sure what happened there, or why. It was not anything that really mattered.