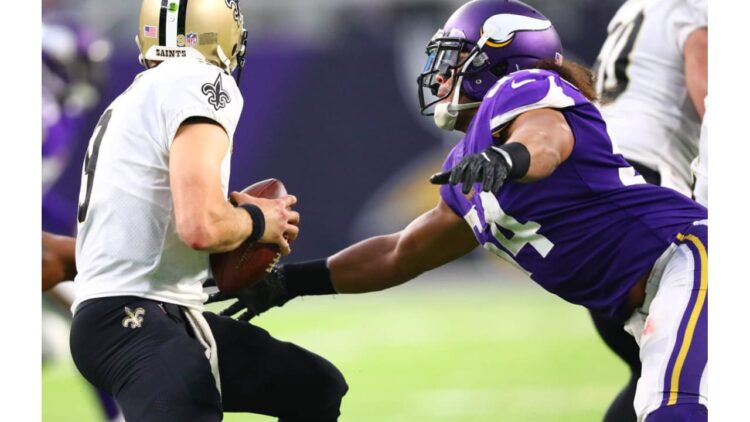 The Vikings have won four of their last five games and for those keeping track, now that sports betting is legal in Minnesota, they have covered the number in all four of those victories. But our boys still sit behind the Bears in the NFC North division race and are just a heartbeat ahead of the Packers. The game on Sunday at Soldier Field will go a long way to determining if this is a team destined for postseason glory or one that will be on the outside looking in when the curtain is drawn on the 2018-2019 regular season.

What we do know is that the Vikings’ defense looked like true invaders in their Week 9 domination of the Lions. Matthew Stafford was vexed from the onset and found himself flat on his back more than he was standing upright as Minnesota launched a relentless assault in the 24-9 win over their divisional rivals from Motown. Danielle Hunter led the charge with 3 ½ of the franchise record 10 sacks and scooped up a touchdown fumble recovery in the fourth quarter to seal the deal as the team bounced back admirably from their loss to the Saints in the previous week.

Another plus was the return of running back Dalvin Cook who blazed his way to a 70-yard run but was tripped up five yards before the end zone but it set up a two-yard toss to Adam Thielen for the second touchdown of the day. Now that Cook is back in the mix, the Vikings have a dual threat in the backfield with Latavius Murray to maintain momentum when Cook catches a breather. It’s a good time to be a Vikings’ fan but the euphoria of the team’s recent winning streak will come to a screeching halt if they are derailed in Chicago after two weeks to prepare.

A quick check over to Sportsbook Review, the sports bettors’ bible, featuring the latest point spreads, money lines, and totals from all the best online sportsbooks on the planet tells us that the Bears are currently three-point home favorites in Week 11 versus the Vikings. One of those sportsbooks is BetOnline, an industry leader and one lauded for customer service, easy withdrawals, and lines on all the major events and even some not so major, is one of the few of the majors that has this number down to 2 ½ which is indicative that some of the sharp, early money is being sent in on Minnesota.

The Vikings defense will serve as the sternest test for Chicago’s kid-on-fire Mitchell Trubisky but don’t underestimate the Bears’ defense which now includes Khalil Mack. If Minnesota weathers the storm in the Windy City there is a long row to hoe. The next four games which include Chicago (road), Green Bay (home), New England (road), and Seattle (road) will serve as the litmus test to determine if this Vikings’ edition is a contender or a pretender. After that Minnesota has two games that have to be in the win column after their grueling four-game stretch when they host Miami and then visit the Lions in Weeks 15 and 16 respectively. And in what could be a pivotal rematch, the Bears will travel to Minneapolis in Week 17 to conclude the regular season.

The scheduling gods were not kind to the Purple but great teams overcome and adapt to any circumstances. Kirk Cousins has a pair of elite receivers in Adam Thielen and Stefon Diggs but he needs his 11th ranked passing attack to produce more than the current 24.6 points per game. Now that Dalvin Cook appears healthy, the passing game should benefit as opposing defenses will no longer be able to key on the pass, with all due respect to Latavius Murray. And if you are as bullish on the Vikings as most fans and want to invest in the fortunes of the team then there’s no better online sportsbook to do so than BetOnline where you might sweat the game but never the payout!