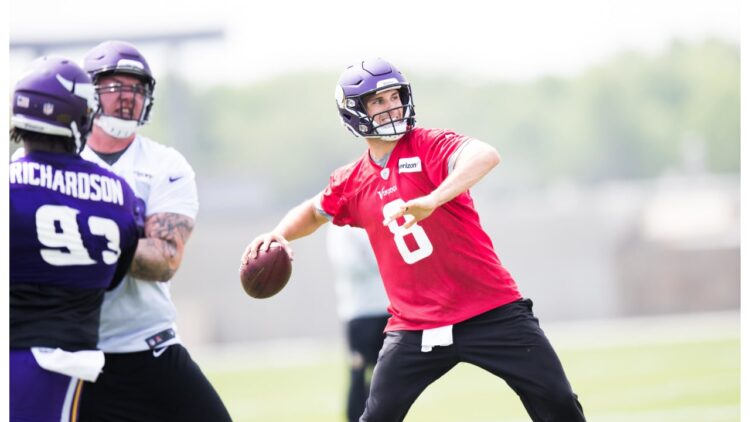 Things were pretty gloomy in Vikingsland going into Sunday Night’s game against the Green Bay Packers, a week after the Vikings fell to the Chicago Bears and  the dam holding back all the negativity that had accrued thanks to the slow start to the season essentially burst.  That lead to a lot of fans calling for the head (or heads) of people on the coaching staff, for reasons that seemingly contradicted each other (running too much, not running enough, for example). Beyond that, because of the bad game that the $84 million dollar man Kirk Cousins had against the Bears, especially with the devastating pick-six he threw that basically ended the game, people were calling Cousins a Herschel Walker level disaster for this team both on a local and national level. While you can’t excuse some of the decisions that Cousins has made while under duress, the fact is that he’s been pressured a lot this season (in the high 40’s in terms of percentages) and because of that his internal clock and decisions have been broken at times. Thankfully, the line seemingly got things together against the Packers and Cousins showed exactly why Vikings management decided to win (what was at the time) the most expensive bidding war in the history of the NFL as he played a nearly flawless game that completely overshadowed the night that Aaron “Best Quarterback in the NFL” Rodgers had… For the second time this season. How did Cousins go from pariah to MVP in one week? It’s easy, the offensive line gave him time.

It’s hard to overstate the game that Cousins had, coming off of what was his worst game as a Vikings in Soldier Field (that’s including the Buffalo Game). Cousins had a completion percentage of over 70% going into the Bears game but only completed 30 of his 46 attempts (for a 65% completion percentage, a good seven or so points from his season average) for 262 yards, two touchdowns and most importantly two interceptions, one of which was returned for the game-clinching touchdown. While there’s no excuse for that, the fact was that he was pressured incessantly (despite the Bears only having two sacks on the day) and that pressure clearly had a negative effect on his day. While Cousins was playing great (this time excluding the Buffalo game) despite the pressures earlier in the season, going against the internal and external pressure brought by Akiem Hicks and Khalil Mack, respectively, was just too much for Cousins and while he has said that the picks he threw weren’t because of anything but bad decisions that he made reading the secondary, you’d have to think that somewhere in his psyche he was trying to do too much to overcome that pressure or that he got rid of the ball too quickly (or missed the defender completely) because of that pressure.

Combine with the losses the Vikings have suffered against the Bills and Saints, games in which turnovers by Cousins cost the Vikings the game, and it’s not hard to see why people were starting to worry that he was the wrong (and super expensive) fit for this offense/team. During his time in Washington, D.C., the knock against Cousins was something similar, that he made poor decisions while under pressure and when the Vikings decided to draft yet another corner with their first pick in April’s draft some people (this writer included) angrily wondered aloud why the team would hamstring such an important player and position. All of that negativity came to a head as we prepared for the Packers to come to town for the second Sunday Night football game in a row and many Vikings faithful basically were picking the Packers to beat the Vikings in Prime Time. That sentiment wasn’t solely based on Cousins’ game against the Bears (or even his performance this season), as another weak point in Cousins’ resume both as a Vikings and a Redskin is that fact that he has essentially been the anti-Randy Moss when it comes to nationally televised games… Meaning that he plays a lot worse than normal when the lights are the brightest. That seemed to follow Cousins from Washington to Minneapolis, as going into the Packers game he and the team were 0-3 in prime time this season.

Luckily for the Vikings, the Packers had their own pattern of failure going into Sunday Night’s game (they hadn’t won a road game all season) and if anything, the Vikings defense proved how important an offensive line can be as even Aaron Rodgers, who is widely considered to be the best quarterback in the game (perhaps ever) struggled to get on the same page with his receivers as his offensive line suffered multiple injuries on Sunday. If Rodgers was struggling due to the pressure brought on by the Vikings front four, then perhaps people should realize that the offensive line position is the most important position group in the NFL and that perhaps Cousins can only do so much. All of that explains why the Vikings and Packers were essentially a push in terms of odds, with the Vikings being three-point favorites at home, according to SportsBettingDime.com ( Sidenote: I’m hooked on SBD’s game previews), which considering the fact that all home teams are typically spotted three points (and the fact that the Vikings and Packers tied earlier in the season) means that no one knew what to make of the NFC North’s “Desperation Bowl”.

The question then becomes whether or not the success that the Vikings had on the line Sunday night is something they can replicate and build upon as the season nears its end. There were a few injuries for the Vikings offensive line unit, as well, that forced the O-line kryptonite that is Rashod Hill to fill in as a tackle on both sides of the line and while some people prefer Hill over rookie Brian O’Neill on the right side, O’Neill graded out as the best offensive lineman against the Bears and has seemingly gotten better each week. Hill is better as a fill-in guy, though, as he’s had some TJ Clemmings-esque games in his career whereas O’Neill is looking like the answer at right tackle that the Vikings have been looking for for years. The success or failure that’s yet to come this season will come down to how the line performs and while the Vikings aren’t solely built to win now ( as they’ve got their core locked up contractually over the course of the next few seasons), it’d be nice to see them make a deep run into the playoffs this season to show everyone what they’re made of and to carry the narrative over from this season to next that this team is gutsy and capable of beating anyone (a la the Saints from last season).

Doing so will be difficult, as they have the hardest remaining schedule of any of the NFC North teams. Depending on what metrics you follow, though, they improved their odds to make the playoffs greatly on Sunday night while they pretty much ended the season for the Packers (who will have to win out and get some help to make the playoffs) we will see if Sunday night’s game was an anomaly from the offensive line or the start of something good (or at least mediocre) from the offensive line, offense and team as a whole. If that’s the case, then the Vikings might be the team that no one wants to face come 2019, let’s hope that’s the case.