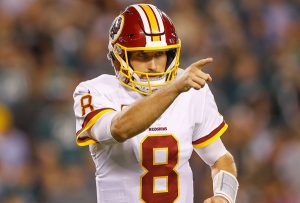 According to multiple sources, Kirk Cousins will be the next starting quarterback of the Minnesota Vikings. The first report came from WCCO’s Mark Rosen.

BREAKING: Free agent quarterback Kirk Cousins will sign with the Minnesota Vikings Wednesday, according to a source. | https://t.co/ugv0m7grAp

It was later confirmed by NFL insider Benjamin Allbright.

Ian Rapoport of the NFL Network reported the Vikings have offered Cousins a three-year deal worth $84 million. That’s $28 million per season. Shawn Zobel of 1500ESPN reported Cousins’ contract will be the first fully-guaranteed contract in NFL history.

Since taking over as the Washington Redskins starting quarterback in 2015, Cousins has put up very good numbers. He’s passed for at least 4,000 yards and 25 touchdowns the last three seasons. While that doesn’t mean his production will automatically transfer to Minnesota, he will have a strong supporting cast around him.

In addition to having the league’s number one defense in 2017, the Vikings have a number of weapons on offense. The offense boasts arguably the best wide receiver duo in the NFL with Adam Thielen and Stefon Diggs, a strong receiving tight end in Kyle Rudolph, and an explosive young running back coming back from injury in Dalvin Cook.

The Vikings also feature new offensive coordinator John DeFilippo, who’s known for aggressive play calling. Now, it appears DeFilippo and the Vikings have their quarterback of the foreseeable future.

While no deal has been inked yet, Cousins’ contract will presumably be signed and become official at some point in the next few days. The 2018 NFL league year, as well as free agency, officially begin tomorrow at 3 pm (CST).