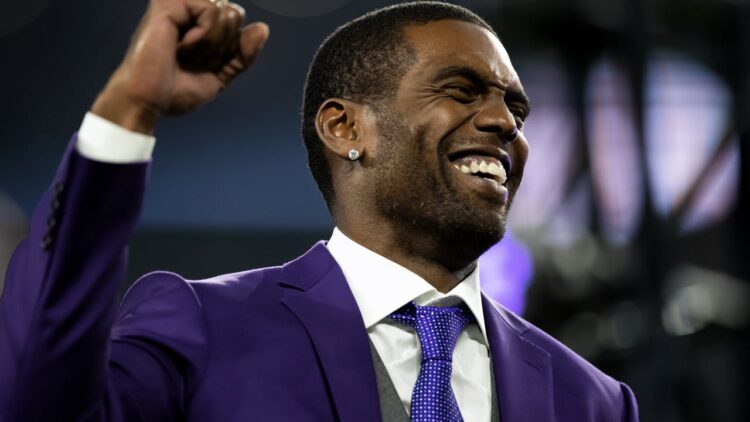 Randy Moss was inducted into the Pro Football Hall of Fame Saturday. Moss’ speech not only reflected his appreciation for the people of Minnesota, but his love for the people in his home state of West Virginia that helped make him the man he is today.

“Faith, family, and football. That’s what makes Randy Moss,” said the legendary wide receiver. “I know God put me here to teach and point others down the right path.”

“Any Vikings fans in the house?” Moss directed to the Canton crowd, “Vikings fans, first and foremost I gotta give the credit to where it’s due. Where would we be without Dennis Green? Cause he wouldn’t have drafted me. Where would the Minnesota Vikings — true Randy Moss real fans be if Dennis Green would have never pulled that trigger at the 21st pick. I wanna thank all the true Minnesota Vikings fans for being able to stick through with me through thick and thin, ups and downs, bumpy roads. This is for us. This is for us.”

Moss continued, “The Wilf family. I want to thank you for opening the door and not being scared to reach out. You all are great owners… y’all continue to do great things in that state and a Super Bowl will be coming your way. Thank you Wilf family”

Randy Moss gives credit to the late Dennis Green for pulling the trigger on him in the draft. Thanks the TRUE #Vikings fans and the Wilf family for being great owners. Says “A super bowl will be coming your way.”

The former Viking had two stints in Minnesota. The “Super Freak” was drafted as a first-round pick (21st overall) by the Vikings in 1998 under head coach Dennis Green. Moss then returned for a brief period in 2010.

Moss is the 14th Minnesota Viking to be enshrined as a member of the Pro Football Hall of Fame. Congratulations to the 2018 Hall of Fame class which includes Moss, Terrell Owens, Ray Lewis, Brian Urlacher, Brian Dawkins, Bobby Beathard, Robert Brazile, and Jerry Kramer.

Minnesota Vikings in the Pro Football Hall of Fame