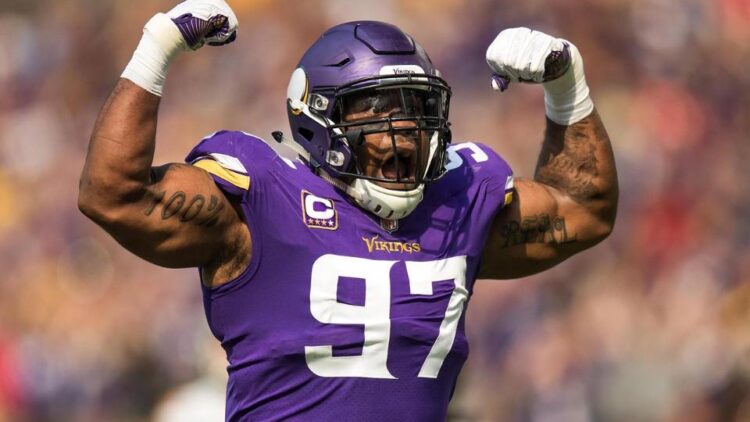 At the end of the last game, the 4-2-1 Vikings were without eight of their starters thanks to injury or as is the case with defensive end Everson Griffen, “personal reasons”. Those reasons have been discussed by this site and every other news source, but what wasn’t known was the timetable for his return to the field. Most assumed with something like depression (that is apparently this severe), that Griffen was most likely out for the 2018 season, however, it was announced by the Vikings that Everson Griffen would be returning to “football activities” tomorrow Wednesday October, 24th which means that he should be able to play Sunday night against the Saints.

We have been in communication with Everson’s medical professionals throughout this process and have relied on his recommendations regarding the appropriate next steps for Everson. We are excited to welcome Everson back to the Vikings and to see him around teammates, coaches, and staff – people who care deeply about his well-being. Our focus will continue to be on providing an on-going support system for Everson and his family.

Being around my teammates and coaches is something I have missed for several weeks. While this is an exciting and positive move forward for me, it is only the next step in a longer process. I look forward to once again putting in the work with the guys and contributing to this team in any way I can. My larger focus remains on addressing my personal health, and I’m hopeful the time will come when I feel comfortable sharing my story and using my platform to bring awareness to these issues. I continue to be extremely grateful for the constant support from my family, my teammates, the Vikings organization and our tremendous fans.

Griffen’s situation is one that can plague a person for their entire lives and so like he mentioned, the help that he received was the first step in a long process, but it, fortunately, sounds like that first step was helpful enough that he will be able to return to the field this Sunday against the Saints. While football is an afterthought when it comes to anyone’s health, Griffen couldn’t have come back at a better time as the Vikings have added a ton of big names to their injury report in the past couple weeks, especially on defense. Should his position group-mate, Linval Joseph, also return, it could go a long way towards helping the Vikings best the New Orleans Saints Sunday night for the third time in a year.