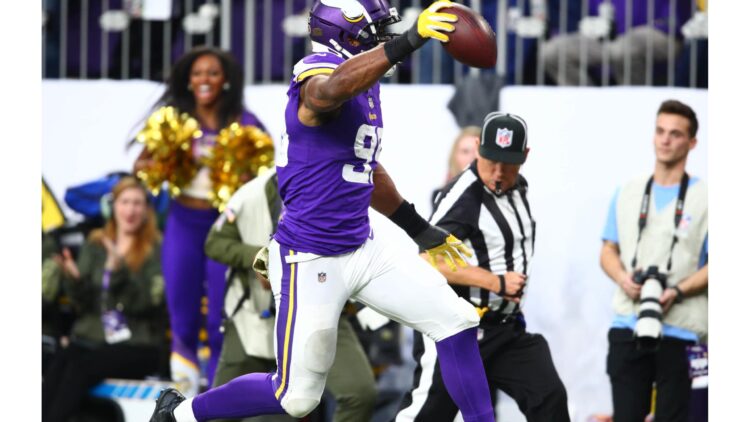 Minnesota Vikings defensive end Danielle Hunter turned in one of the finest defensive performances of the season on Sunday.

Hunter racked up 3.5 of the Vikings’ franchise-record 10 sacks and returned a fumble for a touchdown in a key 24-9 win over the Detroit Lions.

His performance earned him NFC Defensive Player of the Week honors for Week 9. I can’t imagine it was a difficult decision for whoever it is selecting these weekly winners.

👏👏👏@DHunt94_TX has been named NFC Defensive Player of the Week!

The fourth-year athletic freak is the NFL’s leader with 11.5 sacks, 1.5 ahead of second-place Aaron Donald. Additionally, Hunter is tied with Donald for the league lead in tackles for loss with 13.

ESPN’s NFL Matchup Twitter account shared another statistic with Vikings Territory that recognizes Hunter’s relentless impact at defensive end for the Vikings. Hunter is No. 3 in the NFL in disrupted dropbacks percentage, behind only Daryl Worley and Chandler Jones.

Defensive Player of the Week is nice, for sure. Hunter is now the eighth winner of the award under Mike Zimmer and the second Viking to win it this season (Harrison Smith took it Week 1).

With that said, Hunter is striving for a more prestigious award. The Defensive Player of the Year honor is most widely discussed with names like Aaron Donald, JJ Watt or Von Miller — the big names.

But Hunter’s production matches, if not exceeds, each of those big names through the first half of the season. He’s elite both as a pass rusher and in run defense. Plus, he’s consistent — when the Vikings fought through an early-season hiccup in Weeks 3 and 4, he was one of the few players continuing to bring his A-game on the defensive side of the ball.

The man is barely 24 years old and he’s destroying opposing offensive lines every week. He has a truly unbelievable combination of Kevin Durant length and Dwyane “The Rock” Johnson build.

Here’s to the Vikings front office for locking up Hunter long-term prior to this season. I’ve got a feeling that his five-year, $72 million will look like freaking robbery in a few years.