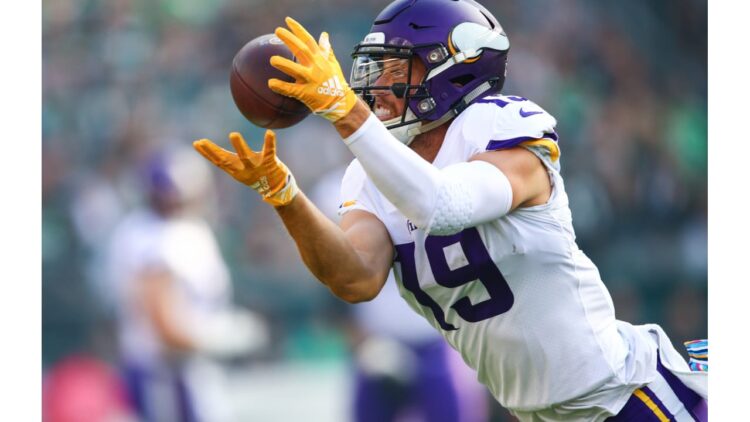 The Vikings did what they were supposed to do on Sunday afternoon against the visiting Arizona Cardinals. (The trap game ghosts of the Buffalo Bills game can be put back to rest for the time being.) The Vikings got down early, but came rushing back and ultimately dominated the Cards in a decisive 27-17 victory.

The entire team can be credited with the win, as the offense, defense and special teams all played well in the game—but then the opposition was basically “who we thought they were.” The Cardinals are a team struggling on both sides of the ball and the Vikings took full advantage in the win.

After a three-game winless streak was busted last week in Philadelphia, the Vikings are now enjoying a two-game winning streak that has brought their record to 3-2-1 and puts them in second place in the NFC North, a little closer to the division-leading Chicago Bears, who lost in overtime to the Dolphins down in Miami. Next week the Vikings travel to New York to take on the Jets. The Purple should be carrying some confidence with them on the plane flight.

Kirk Cousins had another uneven afternoon on the U.S. Bank Stadium turf. He first threw a bad pick in the second quarter: with a defender in his face (who looked to be lining up for yet another blocked pass), Cousins tried to throw the ball away but did not get enough on it and threw it into the diving Tre Boston’s hands. A couple drives later, the Cardinals defense was starting to collapse the pocket on Cousins (who stepped up in the pocket, was hit and held onto the ball). But he put it on the carpet on the next play, leading to a touchdown for the Arizona defense. In a late first half drive, there was a delay of game penalty on the final drive followed by more confusion on the field. Cousins and the offense appeared out of sync.

In the second half, Cousins and the Vikings offense picked up steam, scoring twice in the third quarter to basically put the game out of reach. On the game, Cousins was 24 of 34 for 233 yards, a touchdown and a pick (an 87.0 rating), and he also added a nifty little RPO run for a seven-yard touchdown. So, all things considered, Cousins didn’t have his A game, but grades out with a B for the day—and it was good enough for the win.

Adam Thielen did it again. With 11 catches for 123 yards and a touchdown, he is now the second player in NFL history to amass 100 yards in each of the first six games to start a season. Thielen also set a team record for the most yards in the first six games, passing Randy Moss again for a record. It doesn’t seem like that long ago (training camp) that some were worried about the lack of chemistry between Thielen and his quarterback. I guess those fears were slightly unfounded.

Latavius Murray filled in for the inactive Dalvin Cook (hamstring) for another game and he made the most of rushing against one of the worst rushing defenses in the league. Murray had a great game bowling over would-be tacklers and sometimes breaking free for some wide-open yardage. On the afternoon, Murray carried the ball 24 for 155 yards (including a 34-yard run to finish off the game), becoming the first Vikings rusher to hit the century mark this season. Murray also scampered untouched into the endzone for the team’s first score of the game, and the 155 yards is a career high for him. The running game, with more blocking like this (and opponents like the Cards) might be okay.

The Vikings defense played lights out on Sunday—or nearly so (see below). Anthony Barr has been stepping up his game the past couple weeks (ever since head coach Mike Zimmer reportedly simplified the defense and the unit got back to basics). Barr blocked a pass on third down in the red zone and then a caused a first-half fumble that became a turnover. Danielle Hunter kept his sack string going with a sack of rookie Josh Rosen in the first half and another in the second. George Iloka stepped up in his first start in Purple with eight tackles that led the way for Minnesota. Anthony Harris was all over the field and then jumped a route in the third quarter for great interception. The defense has put together two decent performances in a row—one against a very good team and the second against a team they should have dominated. A good sign going forward.

The offensive line struggled with protecting Cousins on this afternoon, and left guard Mike Remmers appeared to be having the most trouble. While the line did a better job trying to get the running game going (72 yards in the first half and 152 on the game), the pass protection became a problem. Cousins was under pressure early, and it led to the two turnovers. We won’t ignore some of the big holes Murray and Mike Boone (one carry for 20 yards) had to run though, and that fact that starting left tackle Riley Reiff was inactive and Rashod Hill had to switch from right tackle to left, but Cousins needs more time to operate. He was sacked four times and hit seven in the game. That is too much for your big-money signal caller.

Blitzing on third down became an effective tactic for the defense this week. With a rookie quarterback starting his third game, it was a wise maneuver and paid off for the Vikings. Once Barr blocked a pass near the five-yard line and another blitz resulted in a Mackensie Alexander sack, and Harrison Smith got home on a second-half third down blitz for a sack. Blitzing is great to watch when it’s your team doing it and it works, but it can be a risky proposition. But on this day, it wreaked havoc for Rosen and the Cards offense.

Blocked passes. Is this a thing now? Coming into the game, Cousins has had six passes knocked down (which was T-3 in the league) and then had three more in the first quarter. He suffered a total of six on the game. That’s a result of poor blocking, for sure, but it has to be a bit of a vision problem on Cousins, as well. Need to clean it up.

Big plays: We said this last week and will keep saying it until the defense decides to stop giving up big plays. The secondary gave up two in the first half—one lead to a field goal and the second put the Vikings in bad field position. On the second play, a 40-yarder to Ricky Seals-Jones, it looked like a little push off of Harrison Smith, so we give them a bit of a pass there (and defense stopped the Cards on fourth and one yard to go), but it is big plays that is hurting this defense more than anything.

Injuries: The Vikings were pretty much unscathed for three quarters on Sunday, but suddenly in a late fourth quarter drive, they needed to assist two players off the field. Linval Joseph pretty much walked off under his own power (probably needed some oxygen) and later returned, but the injury to Mike Hughes’ left knee did not look good. Hughes was covering a receiver in the slot and got his right foot stepped, and his left cleat planted and buckled his left knee. We will have to wait (it looked like an ACL), but the trainers didn’t even look at his knee on sidelines, rather took him straight to the locker room.